Home Arts & Culture ‘Spamalot’ is a ride of madcap silliness 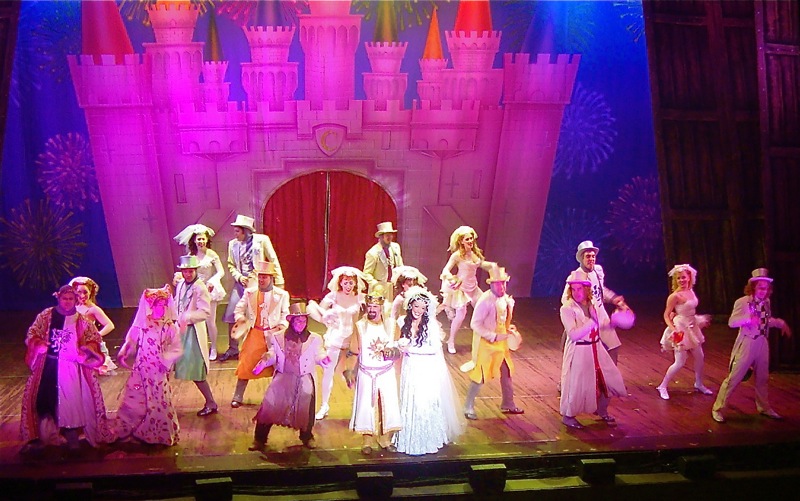 When Monty Python and the Holy Grail was released in 1975, their wildly irreverent treatment of the Arthurian legends seemed the height of chutzpah. With the advent of VCRs, it became a cult classic that true devotées could recite by heart. Adding a few more gags and songs, Spamalottrod the boards of Broadway in 2004. Now it has come to Old Town’s Cygnet Theatre where they’ve thrown in a few tweaks and touches for a local audience.

The story follows King Arthur and his Knights of the Round Table on their quest to find The Holy Grail (which was the Kiddush Cup used in the Last Supper, which was actually a Passover seder). They think they’ll find it on the Isle of Briton where they encounter taunting Frenchmen, wacky knights and a leaping bunny that bites men’s heads off. At intermission, a woman asked if I was able to follow the story. If you’re looking for a logical narrative, this isn’t it. Whatever they do, just go with it.

Artistic Director Sean Murray really gets to ham it up as King Arthur. As a king, he’s pretty full of himself, yet also playfully silly. Christine Hewitt gives a standout performance as the Lady of the Lake. Soulful and brassy like a cabaret diva, she speaks up when she doesn’t get enough stage time. As mutual love interests, they make a formidable pair.

Costume Coördinator/Dresser Sarah Palmer really had to stay on her toes as the ensemble went through many costume and wig changes. David S Humphrey was very funny as the mouthy communist, Dennis, magically transformed into Sir Galahad. James Saba was a laugh-out-loud riot as Sir Robin, the knight who panics in the face of danger and whose entourage of minstrels keep singing about it. Evan White and Bryan Banville were delightful as Lancelot and Prince Herbert, busting out of the closet and into disco.

I was charmed by Jonathan Sangster, Arthur’s squire, Patsy, as he gave a classic Broadway song and dance.

“You won’t succeed on Broadway if you don’t have any Jews.”

My one bone to pick is that their French mime needs more training. She just didn’t have that flow and pop that realizes the illusions.

If you need some good laughs (and who the hell doesn’t?) grab your coconuts and come to Spamalot. There are sight gags, slapstick, dancing girls, drag, a singalong … everything you need for a night of madcap silliness.

Spamalot plays at the Cygnet Theatre in Old Town through August 5, 2018.