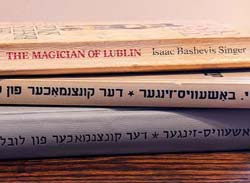 “The Magician of Lublin” is the story of a performer who, like Houdini, is adept at getting himself out of seemingly impossible situations including affairs with several women, poverty, criminality, and more. I.B. Singer wrote in Yiddish under the name Yitzhak Bashevis (and other pen names), an adaptation of his mother’s name taken in order to distinguish himself from his brother, I.J. Singer, who brought him to the U.S. in 1935. By the time he won the Nobel Prize for Literature in 1978, his work had been translated into dozens of languages. The Yiddish novel “Der kuntsnmakher fun Lublin” was serialized in “Forverts” in 1959 and published in English in 1960.

In this talk, Professor Anita Norich will explore the questions Bashevis Singer poses in the novel about sin, evil, faith, and the choices available to Jews living in the modern world.
___

The Great Jewish Books Lecture Series gives learners of all ages the opportunity to delve into great works of Jewish literature with top scholars in the field. Each month, a speaker presents a virtual talk focusing on an author or work, followed by a Q&A with the audience. These talks span a wide variety of literary subjects, presenting works written in many languages from classic Yiddish texts to contemporary Jewish American writing.

The Great Jewish Books Lecture Series is made possible with the generous support of the Salkind Family Foundation in memory of Marilyn Salkind.