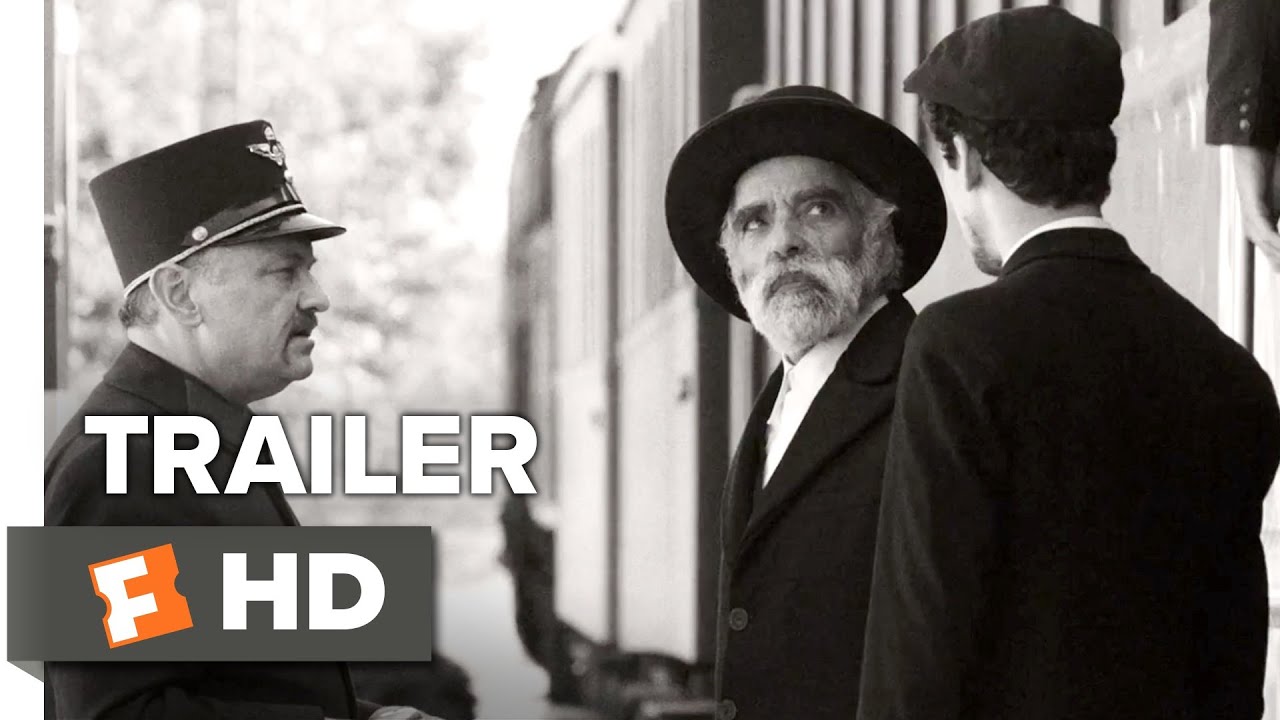 Everyone in a small Hungarian village knows the war is practically over. The 2017 film 1945 is a subdued, but highly accomplished black and white film crafted by writer-director Ferenc Torok and produced by Menamshen Films and is currently streaming on Amazon Prime.

The film progresses through a single August day in the year 1945, only hours before the end of the second world war.

The first scene opens to a view of the town that is putting the finishing touches on the planned celebration of the wedding of the local magistrate’s Istvan’s (Peter Rudolf) fragile son Arpad (Bence Tasnadi) to a woman Kisrozsi (Dóra Sztarenki) who in reality loves another. And there begins this fictional story of lies, deceptions, and ill-gotten gains taken by the townspeople from the Jews who were deported in 1944.

The director, Torok, chooses as the scene’s soundtrack the sound of an approaching train’s blaring whistle, the heaviness of the train straining to move its cargo so reminiscent of the Nazi cattle cars that transported the Hungarian Jews to the concentration camps. Tornok uses a cinematographic long shot to encapsulate the approaching cattle cars, the heaviness of the train with its shrill whistle blaring. Without clearly stating the obvious, the viewer instinctively knows one is watching a Holocaust film.

Also on this supposedly happy wedding day, two Orthodox Jewish men a father (Iván Angelus) and son (Marcell Nagy) step off the train as they unload two large crates. Both men remain mostly mute throughout the film, but you feel and hear their intent even in their silence.

These men are then seen speaking to two horsemen and making arraignments to carry their cargo to the town center.

Surreptitiously the train station manager instructs the horsemen to slow-walk the travel, so he has time not only to warn the Magistrate that “The Jews Are Back” but also suggest their true intent?

The Orthodox men are next seen negotiating with the burly, Hungarian horsemen to take two large crates to the center of the town. The four men consummate their negotiations, and the Hungarians lift the crates onto the back of their horse wagon and set off for the town center; only a few kilometers from the train station. The Orthodox Jews refuse to ride on the wagon but instead walk silently behind the wagon as they too make their way several kilometers to their destination. Torok uses this cinematic realism to evoke memories. Memories that reimagine scenes of Holocaust death marches. The methodical slowness of these continuous scenes further locks you into questioning motivations and reasoning for their return.

What’s in the crates? The contents are purported to be perfumes and cosmetics to be sold to the Magistrate’s general store and to the local townspeople. Is this even believable?

Word quickly spreads through the small community of the Jews’ arrival and that they are here to sell their perfumes and cosmetics but few in the town believe it.

More sinister speculations spread virally like a disease. Rumors fly that in fact, these two men have returned to take back their rightful possessions or property. Many of the townspeople know that they are living in and using seized possessions. Homes and possessions were illegally taken after the mass Jewish roundup and deportations in 1944.

The Magistrate maintains the documentation as evidence of the seizures. And they all knew the fate of the Jewish families at the hands of both their own countrymen and the Nazis.

1945 is a cymographic black and white masterpiece told with limited dialog but its message clearly jolts you and doesn’t let you go from start to film’s end. Combined with the musical score and haunting sound effects, the film to make an indelible mark on your psyche. And all/or many of us know someone(s) who was affected by what happened in Hungary during the Holocaust. Caution: Because of sex and drug abuse, this film should only be viewed for audiences 16 and older audiences.

For those unfamiliar with the Hungarian experience in the Holocaust, the U.S. State Department has reported that Hungary joined the Axis power in November 1940. The Hungarian government under Miklos Horthy obligated Jewish males to serve in labor battalions, which led to the deaths of at least 27,000 Jews in the early 1940s before the Nazis occupied the country in March 1944. In the summer of 1941, Hungarian authorities deported some 20,000 Jews to Kamianets-Podilskyi in German-occupied Ukraine, where they were killed by Nazi Einsatzgruppen. A few months after the German occupation of Hungary, Hungarian authorities and German security police began the systematic deportation of Hungarian Jews. More than 440,000 were deported, with the majority sent to Auschwitz-Birkenau. By the end of the war, of the approximately 825,000 Hungarian Jews identified in a 1941 census, only 255,000 survived. Approximately 100,000 Jews currently reside in Hungary, primarily in Budapest, of whom an estimated 4,500 are Holocaust survivors.