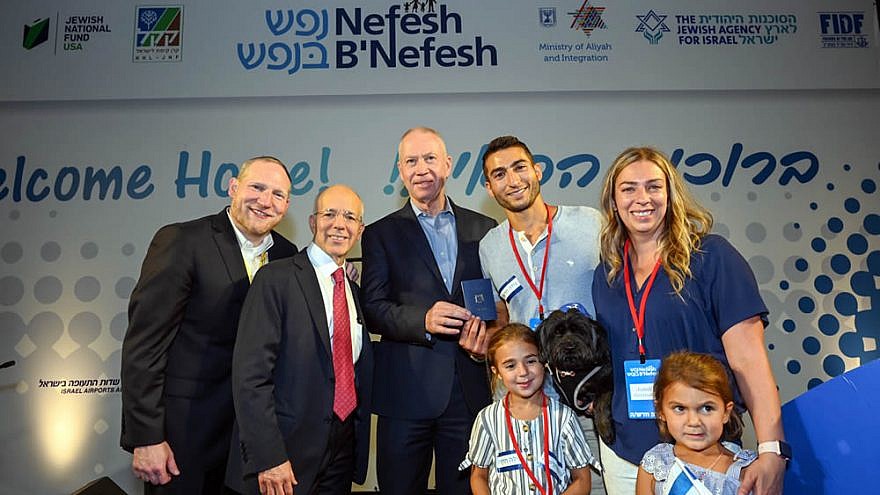 A total of 242 new olim from North America landed on Tuesday at Ben-Gurion International Airport on Nefesh B’Nefesh’s 60th specially chartered EL AL flight, with the 60,000th new immigrant onboard.

They came from a variety of backgrounds culturally, demographically, religiously—hailing from 22 U.S. states and two Canadian provinces. The group includes 103 children under the age of 17; 21 medical professionals; three sets of twins; and a 28-day-old baby, who officially became the youngest to make aliyah this summer through Nefesh B’Nefesh.

Before departure, 23-year-old Daniel Gross from Baltimore quipped that he was making aliyah to “find a nice Israeli girl … and for the food.”

“In all seriousness,” he continued, “I’m fulfilling a 2,000-year-old dream to go back to Israel and Jerusalem,” a decision he said was nurtured by his older brother in Israel, his education at Jewish day school, his teachers and previous trips to Israel. “We are living in a really unique time in history,” he told JNS.

Gross will go to the religious Kibbutz Levi as a part of the Garin Tzabar preparatory program for the Israel Defense Forces, where he hopes toll be recruited into an infantry unit.

Others on the flight included artists, chemists, lawyers and nonprofit leaders who will move to communities throughout Israel. In fact, 78 olimwill be part of Nefesh B’Nefesh’s “Go Beyond” program, which provides enhanced aliyah packages and increased services to those moving to Israel’s periphery regions and Jerusalem.

In an address to the new immigrants, co-founder of Nefesh B’Nefesh Rabbi Yehoshua Fass said “each and every oleh brings a world of their own to Israel—culturally, ideologically and professionally, as they strengthen the Jewish nation.”

Yehuda Sharf, director of the Aliyah, Absorption and Special Operations Department of the Jewish Agency, told the immigrants that compared to himself, who was born in Israel, “you are the real Zionist people in this century.”

The Aug. 13 flight was facilitated in cooperation with Israel’s Ministry of Aliyah and Integration, the Jewish Agency for Israel, Keren Kayemeth LeIsrael (KKL) and Jewish National Fund-USA.