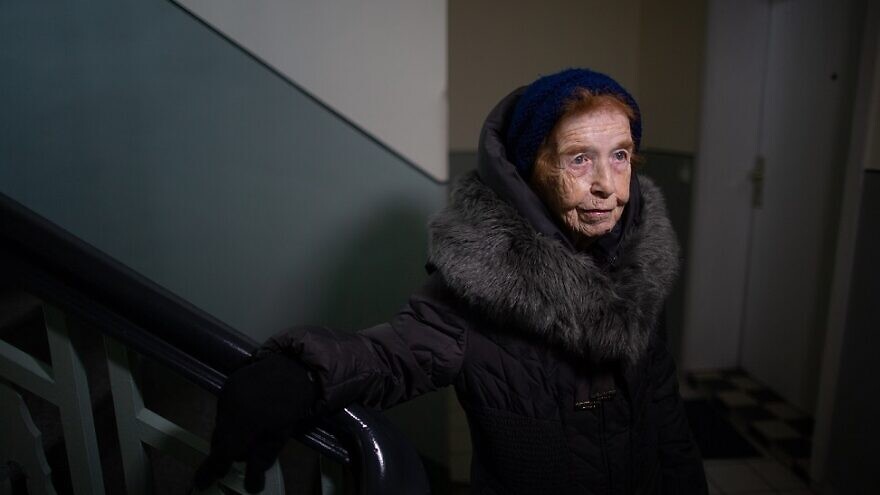 Standing in the foyer of her childhood home at Reilstraße 18 in Halle, Germany, nonagenarian Eve Kugler recalled fleeing her hometown soon after Kristallnacht when she was a young girl. Now, 83 years later, her small frame further accentuated by the towering doorway, she was, if even for a moment, both 90- and 7-year old Eve at once.

As part of the March of the Living UK delegation to Germany last month, Eve took advantage of the offer to visit Halle ahead of Kristallnacht, the devastating pogrom against Jews, their businesses and their religious institutions that took place in Germany and Austria on the night of Nov. 9-10, 1938. Halle is a beautiful city, a two-and-a-half-hour drive southwest of Berlin. With its wide avenues in some areas and narrow cobblestoned streets in others, it has become a magnet for university students and young families.

Naturally youthful and sprite, Eve was doubly so, girl-like even, as she discovered the staircase leading up to her former apartment.

“Oh look!” she exclaimed, as she pointed to the backyard through the stairwell window on the first floor, and “oh, look!” as she excitedly climbed the staircase with youthful vigor and discovered the door to the apartment in which she had lived on the third floor. She hoped to see inside, but the owners were not home.

As explained on the United States Holocaust Memorial Museum’s website, “on the night of November 9, 1938, violent anti-Jewish demonstrations broke out across Germany, Austria, and the Sudetenland region of Czechoslovakia. Nazi officials depicted the riots as justified reactions to the assassination of German foreign official Ernst vom Rath, who had been shot two days earlier by Herschel Grynszpan, a 17-year old Polish Jew distraught over the deportation of his family from Germany. 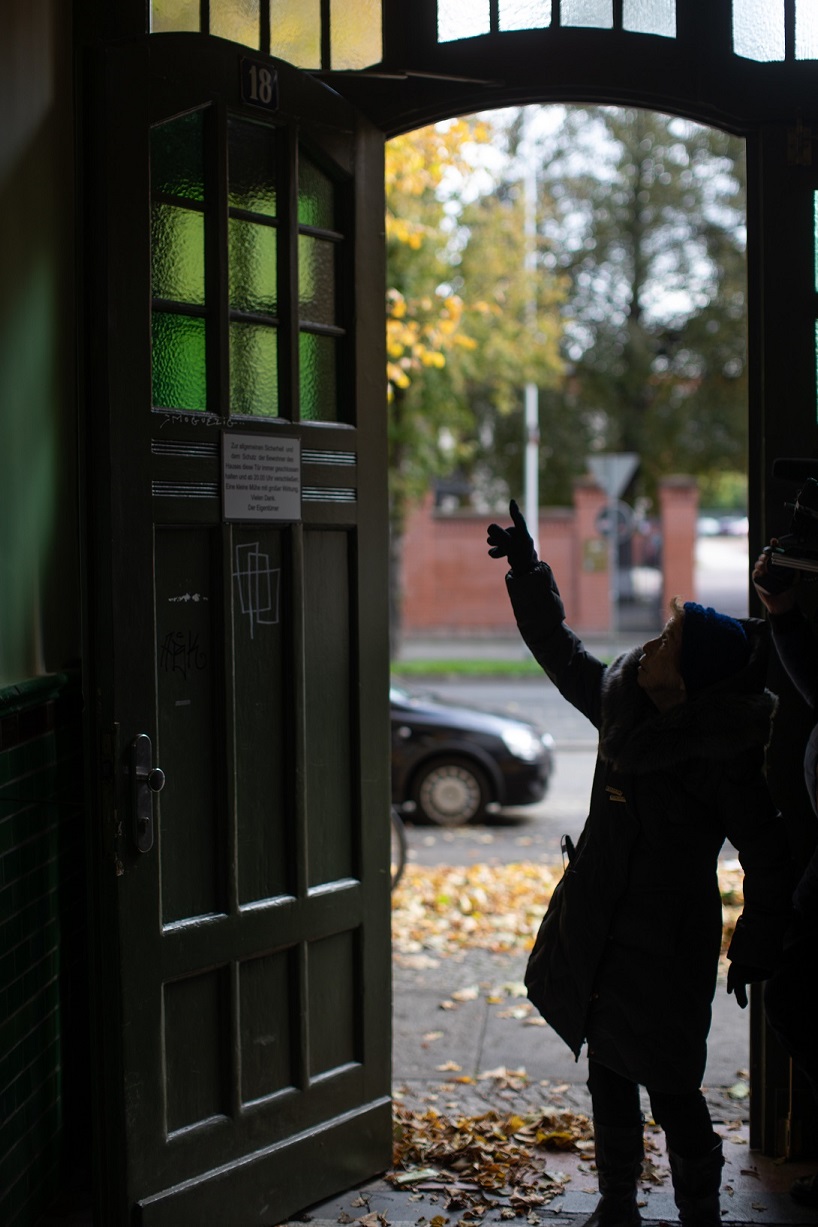 Eve recounted that “when I was 7, SS officers burst into our home. They tore the pages out of my grandfather’s Gemara, ripped his tallit and shredded his Sefer Torah. Photo by Sam Churchill.

“Over the next 48 hours, violent mobs, spurred by anti-Semitic exhortations from Nazi officials, destroyed hundreds of synagogues, burning or desecrating Jewish religious artifacts along the way. Acting on orders from Gestapo headquarters, police officers and firefighters did nothing to prevent the destruction. All told, approximately 7,500 Jewish-owned businesses, homes, and schools were plundered, and 91 Jews were murdered. An additional 30,000 Jewish men were arrested and sent to concentration camps. Nazi officials immediately claimed that the Jews themselves were to blame for the riots, and a fine of one billion reichsmarks (about $400 million at 1938 rates) was imposed on the German Jewish community.

“The Nazis came to call the event Kristallnacht (“Crystal Night” or “The Night of Broken Glass”), referring to the thousands of shattered windows that littered the streets afterwards. , but the euphemism does not convey the full brutality of the event. Kristallnacht was a turning point in the history of the Third Reich, marking the shift from anti-Semitic rhetoric and legislation to the violent, aggressive anti-Jewish measures that would culminate with the Holocaust.”

‘The store was a shambles’

Eve recounted that “when I was 7, SS officers burst into our home. They tore the pages out of my grandfather’s gemara, ripped his tallit and shredded his Sefer Torah. Later, we learned that the synagogue which my grandfather had established had been burned to the ground. I don’t think the pain will ever leave me.”

Eve’s mother, Mia, describes her experience the day after Kristallnacht. “The doorbell rang. I stood still, my heart pounding painfully in my chest. Again, it buzzed. I heard a muffled female voice. A woman calling my name. I walked down the corridor, supporting myself against the wall. With shaking hands, I turned the knob and opened the door. It was Ella, our saleswoman. Tears rolled down her cheeks. ‘Frau Kanner, you have to come down to the store. Oh, it’s dreadful. I’m so afraid! The Gestapo said you were to come right away. Please, right away!’

“I dressed in two minutes. It was best to obey. I could not have the Gestapo back in the apartment. In the street, things did not look right. I closed my eyes, feeling dizzy. A man’s voice shouted, ‘Clean up this mess, at once.’ ‘Mess?’ I stared at the SS officer standing at the store entrance, arms folded across his chest. Then I saw. I saw flat, jagged pieces of glass everywhere. The sidewalk was covered with broken glass. Our store’s three large plate glass windows had been shattered. Inside, the store was a shambles. The glass display counters had been smashed. Merchandise was strewn on the floor and over the broken counters. Cartons had been emptied of socks, dresses, towels. I was immobilized by the disorder.

“ ‘Didn’t you hear me?’ the officer shouted. ‘Vandals broke into your store in the night. Clean up. I do not want to tell you again. And another thing. Get these windows repaired. Today.’

“In the stockroom, I found a broom. I dragged an empty carton into the street and began to sweep up the broken panes. The butcher came out of his shop across the street, watched for a moment and went back inside. Shoppers crossed to the other side of the street. Trolleys rumbled by. The guard watched. I swept. Vandals? The Nazis were the vandals. Bitterness and anger engulfed me as I swept. Gangsters, criminals, beasts. … I raged silently and continued to sweep. I found more empty cartons and filled them with shards of glass from the sidewalk. The Gestapo guard watched every move I made.

“When I finally finished sweeping up the glass on the sidewalk, I mumbled the word ‘Glazier.’

The guard nodded, and I walked the short distance to the glass shop. The glass cutter’s wife was polishing a mirror when I entered.

“ ‘Our windows’—I stopped helplessly. I could not find the words to explain, but it wasn’t necessary. The woman knew.”

“My husband will be there in the afternoon,” she said.

“The Gestapo guard was still there when I returned. The children had been alone for more than two hours. I started for the apartment lobby, but the Nazi shook his head, pointing to the store premises. I collected the broken counter glass. I looked at the Gestapo. He shook his head and for the rest of the morning, I sorted and folded merchandise, separating dry goods from clothes, separating larges sizes from small, making a mental inventory. Blankets, shirts and baby clothes were missing. Of course, they stole. Beasts, savages, thieves … I raged.”

‘I do worry about the future’

Nearly a century later, anti-Semitism is alive and well in Germany.

One incident stands out because it took place in Halle. On Oct. 9, 2019, the Jewish holy day of Yom Kippur, Stephan Balliet, 28, attempted to break into the synagogue and kill those inside. Though he shot at it several times, the heavy, bolted door prevented him from gaining entrance. Instead, he killed a non-Jewish bystander and a customer in a nearby shop.

“I couldn’t believe it happened in Halle,” said Eve. “I felt it was us again. It was Kristallnacht all over again. It was very personal. I was distressed and enraged at the same time. They are still after us, after the Jewish people here. I felt it so personally.”

“Unfortunately, anti-Semitism, hatred of Jewish people is still here,” she continued. “I’m a bit pessimistic. I do worry about the future. The Jews will survive. We have children. We have shuls all over the world. But it is going to be difficult.”

In her online book titled, Shattered Crystals, Eve describes the lasting effects of Kristallnacht and her experience as a whole. She recounts the history of the escape of her mother Mia, her father Sal, and her two sisters, Ruth and Lea, from Nazi Germany after Kristallnacht and how they defied the odds and survived in France before and after German occupation until liberation. During this period, husband and wife were forced apart; children were separated from parents and sisters from each other. For some of this time, she and her sisters were sheltered, along with other homeless Jewish children, by the Oeuvre de Secours aux Enfants (OSE), which became vital to the family’s survival.

The OSE was founded in 1912 in St. Petersburg by Jewish doctors concerned with the health and welfare of Jewish children. Following the Russian revolution, it moved to Berlin, and in 1933, to Paris. During and after World War II, it cared for Jewish children displaced by Nazism. Eve and her sister were among those children. 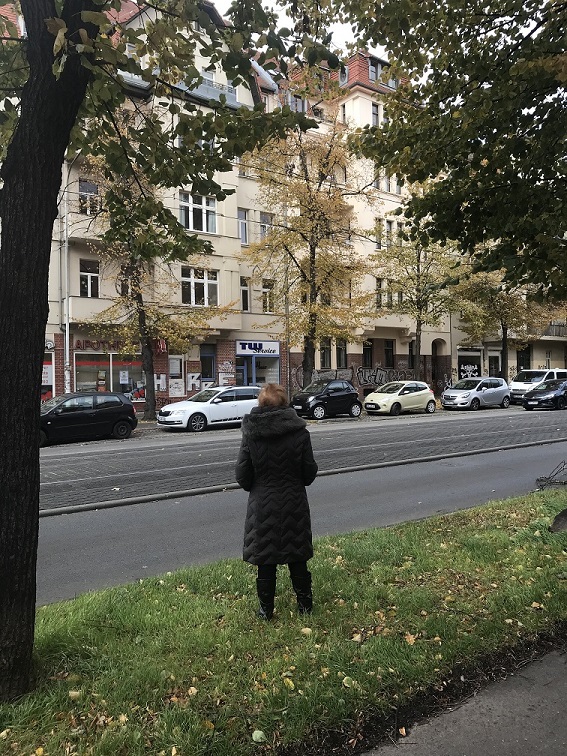 In her online book titled, “Shattered Crystals,” Eve describes the lasting effects of Kristallnacht and her experience as a whole. Photo by Israel Kasnett.

At the outbreak of World War II, Eve and her sisters were admitted to the OSE home outside of Paris. With the fall of Paris, they were evacuated to a new OSE home near the city of Limoges in central France, where the family was again united.

In 1941, the United States issued a limited visa for just a few hundred Jewish children trapped in French concentration camps. At that time, the French Resistance was unable to smuggle children out of the camps, and the visas were given to the OSE. By a stroke of luck, Eve and her older sister Ruth were part of the second group and left the OSE home at the end of June 1941.

Eve was 10 years old when she arrived in the United States in the fall of 1941—one of more than 100 OSE children who sailed across the Atlantic from France that summer on a special U.S. visa. From the time the ship docked in New York until she was reunited with her parents five years later, she lived in three different foster homes.

“They were difficult and lonely years for me,” she writes in her memoir. “Unlike children who remembered and carried with them the love and security of their homes and families in Europe, I brought with me no such memories. I dealt with the trauma of Kristallnacht and the confused, insecure and at times dangerous existence of the ensuing years by obliterating what happened.”

Gazing from across the street one last time at her father’s store and her family’s apartment above it, Eve thought of her family’s forced flight from Halle after Kristallnacht, the indifference of her neighbors, the destruction of the Jewish community and the theft by the Nazis of all their possessions, as well as her own childhood.

“Shocking,” she said, shaking her head in disbelief.

Eve’s full story can be accessed online at: http://shatteredcrystals.net/.