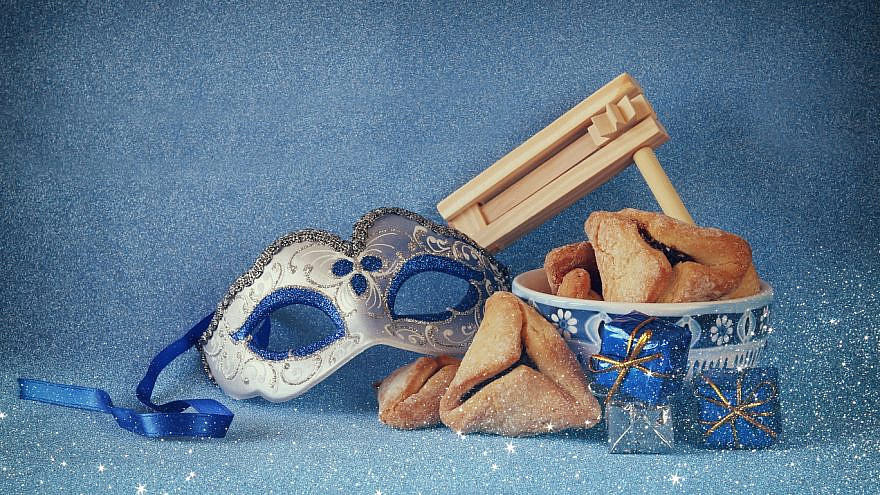 Last Purim, a mask was just a costume and not a medical device.

For most back then, the coronavirus was just another item on the nightly news. So, as usual, Jews the world over donned their silly hats and goofy wigs at Megillah readings, and took the family to Purim carnivals, parties and parades. And, after dropping off mishloach manot—goody baskets for friends and family—the youngsters proceeded to overdose on sugar while the grownups tended to overdo it on alcohol.

Looking back with 20/21 hindsight, we see last Purim as a more innocent time, when the term “social distancing” had not yet become part of the lexicon, and most of us were blissfully ignorant of how our lives would radically shift within the few short weeks between Purim and Passover.

The upshot: This year’s pandemic Purim is shaping up to be a somewhat subdued version of the traditional lunacy. “Our kids are going to miss out on the usual Purim—the parade, the costumes and the Temple Purim shpiel,” says mom Sharon Shafrir of Rochester, N.Y. “It can’t be exactly the way it usually is.”

The requirements of the day are also fairly enjoyable ones. Chief among them: hearing the Megillah, the book of Esther. Note: This year to minimize chances of exposure to COVID-19, quite a few outdoor readings are being planned (extra layers recommended in some climates) while many (though not all) authorities have declared a live broadcast—not a recorded one—a legitimate way to fulfill the obligation. Note: Some maintain that Zoom, Facebook and Skype, for instance, have the added advantage of both hearing and seeing the reading. (Note: An online search should turn up a live Zoom or Facebook one in your time zone).

Some of the other holiday traditions include baking hamantaschen (stuffed cookies modeled after Haman’s three-cornered hat); sending gifts of food to friends and neighbors, the above-mentioned mishloach manot; giving charity to the poor, which can certainly be performed without exposure to crowds; and the joining in a seudah or festive meal, easily done in your own household. (Ditto for imbibing, which is why an anonymous wag once dubbed the holiday “Pour ’Em.”) Note: You can credit the popular instruction t 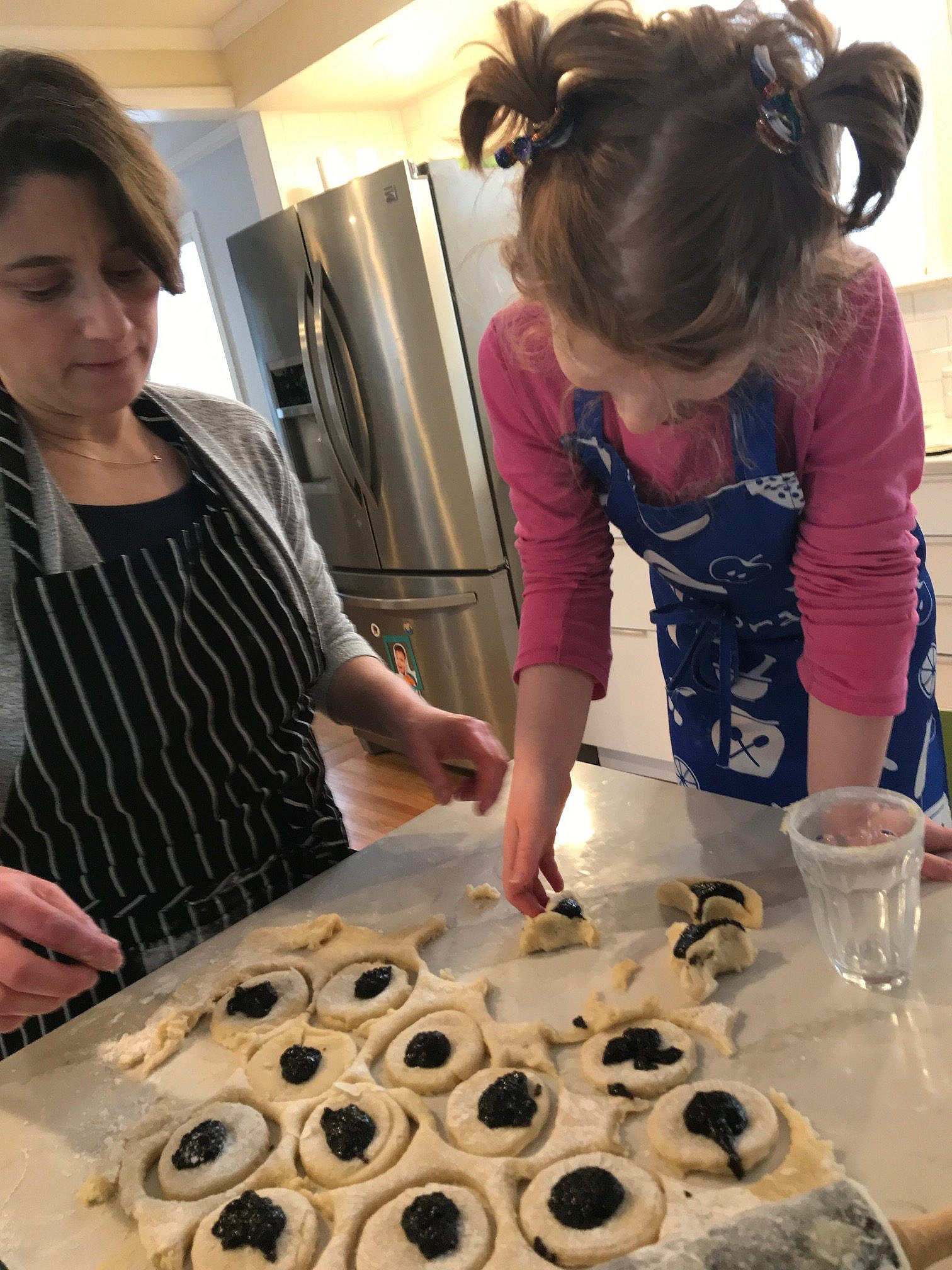 o drink until you’re unable to distinguish between ‘Blessed be Mordechai’ and ‘Cursed be Haman’ to fourth-century Talmudic sage Rava.

But the Purim party, costume parade and carnival, as well as the traditional Purim shpiel or play before a live audience, are a bit more problematic this year.

The challenge is to be strategic enough to create an entertaining and memorable Purim within current pandemic conditions. “There really is a lot we can do with the kids here at home,” maintains Shafrir. “And for connection with our community, we now have Zoom and other online technologies to enable us to be together.”

Whereas in North America Purim is mostly a holiday for children—the costume parades and Purim carnivals and festive Megillah readings with ear-splitting groggers—in Israel, Purim is the year’s biggest party-night, when teens and young adults let down their hair, or more often than not, someone else’s hair.

But not so much this year, says Rami Patimer. And he should know. His family has been running Brurya Costume Store in Tel Aviv for 35 years, so he grew up among the costumes, masks, wigs and makeup pots.

This year, since the costume showroom is closed and the store is doing only deliveries (to the tune of 500 a day), there’s been a dramatic shift in the nature of the business, he reports.

“It’s strange; usually 80 percent of our sales are to teens and adults. But now it’s flipped, and 80 percent is for newborns to age 12.”

The reason? Patimer sums it up in two words: “No parties.”

“If you’re 21 and you’re not going to a party, why bother getting dressed up? But if you’re a kid, you have to celebrate, you have to have a costume, or it wouldn’t be Purim. Nothing can stop that.”

Celebrating Purim and learning its lessons

Indeed, when it comes to making Purim real for her kids this year, Shafrir sees “the full half of the glass.” There are hamantaschen to bake—some to drop at friends’ houses and others to send to Jewish soldiers alone on U.S. Army bases at Purim time; their temple’s interactive Purim shpiel on Zoom; and yes, there are costumes to design and create.

And, since in her Jewish Family Services job she works with those with disabilities, Safrir is also active in creating a joyous Purim for them and their families, “online activities to do together from the comfort of their living room.” One benefit: Sometimes, she says, these Zoom events are actually easier for kids with sensory issues who may have a hard time with all the noise and chaos of a typical Purim celebration. 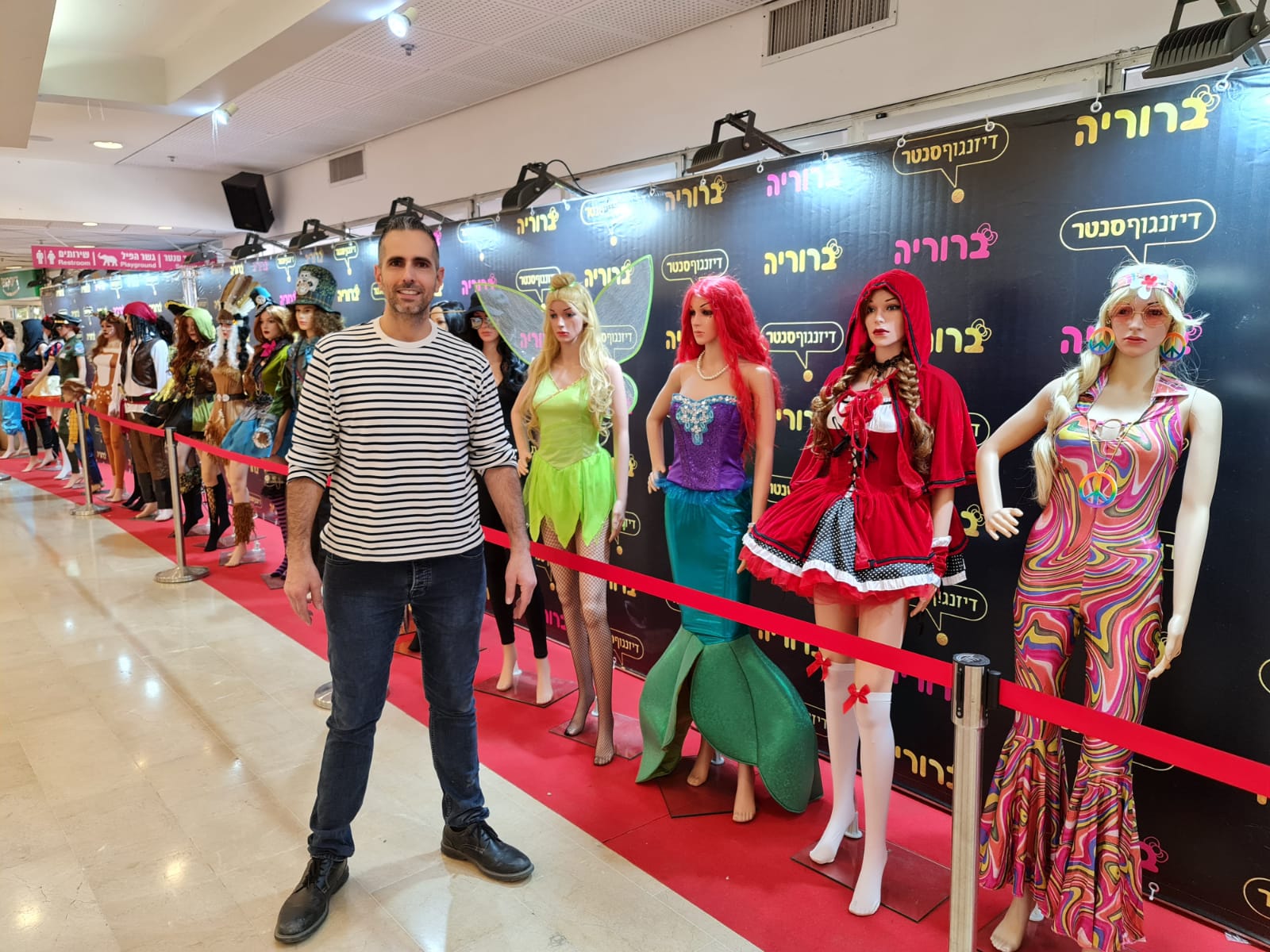 Zoom has also vastly expanded the number of women who can attend—at least, virtually—Sarah Yehudit Schneider’s annual Purim High Council. Every year since 1990, as many as 200 women have managed to squeeze into the Jerusalem Old City apartment of Schneider, who’s the author of Purim Bursts as well as a number of other books on mystical Judaism. “The walls expand,” she says of the party the highlight of which is the High Council ceremony, a “deep prayer and meditation, calling on Queen Esther’s secrets for bringing down redemptive light for the planet, something we need so much right now,” says Schneider.

This year, since Jerusalem is an ancient walled city—where they celebrate Shushan Purim a day later on 15 Adar, due to Shabbat falling on that date—their holiday spans three days, Friday until Sunday. And the High Council begins at 6 p.m. Israel time (11 a.m. East Coast time) on Sunday, Feb. 28.

Though she says she’ll miss the in-person intensity of her usual Purim gathering, Schneider argues that the Purim story has more to teach us this year than in the past. “The unifying message of Purim is so strong,” she says. “Esther asked all the Jews of Shushan to fast with her before she approached the king, and we have mishloach manot and charity we give to the poor to remind us that we are one. Whether we’re religious or secular, liberal or conservative, a vaccinator or anti-vaxx, it doesn’t matter. Purim is about being one people and all being in this together.” (To register for the free program, click here.) 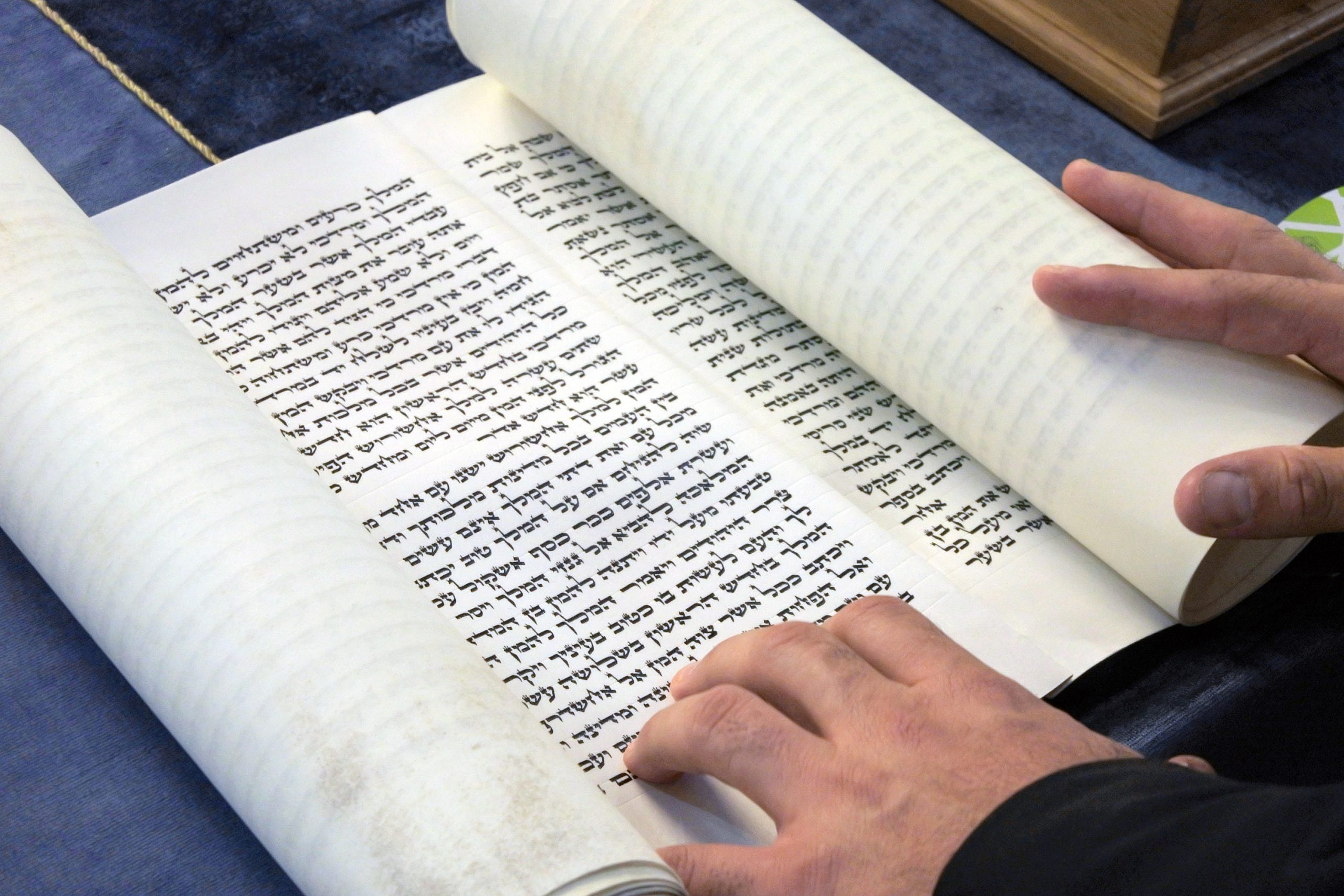 A rabbi reads the Megillah on Purim. Credit: ChameleonsEye/Shutterstock.

There’s a hint to how we can understand Purim this year lodged in the core of the holiday itself, according to Rabbi Morrie Wruble, longtime Jerusalem-area Torah teacher for both teens and adults. “In the Purim story, God is hidden; in fact, the Megillah is the only one of our sacred texts where the name of God is not mentioned even once,” he says.

“The Jews of Persia read Haman’s decree to destroy them and thought all was lost, but they didn’t see that God was there throughout. Purim reminds us that even in these dark times—when facing pandemic, terrorism, economic hardship—even when He is the most hidden, He is with us nonetheless,” he explains.

That’s why we have hamantaschen, where the filling is hidden, adds Wruble, “to teach us that sometimes God’s sweetness is hidden from sight, but it’s there waiting for us inside.”

In fact, over at his Tel Aviv costume store, Patimer reminds us that the most enduring Purim lesson is one of hope. “You know what most of the kids want to be there this year? Superheroes: Superman, Wonder Woman, Batman. And you know why? Because superheroes prove that one person can change everything, one person can fix the world. That is something we all need to believe now.”

Hints for a Happy Purim

Mixed-up mishloach manot: Why not branch out this year to include some atypical treats for your friends, family and neighbors? Such out-of-the-box goodies as homemade salsa, soup, salads and strudel are sure to bring a smile.

Snuggle up with a warm book: Here are PJ Library’s Meredith Lewis’ Purim picks: Ages 2-5: The Better-Than-Best Purim (Amazon Publishing) by Naomi Howland shows little ones that giving goes to both ways. Ages 6-9: Esther Didn’t Dream of Being Queen (Behrman House) by Allison Ofanansky offers early readers a delightful fairy tale version of the Megillah. Ages 9-12: The Queen of Persia: An Illustrated Adaptation of An Ancient Story (Shazak Prod) by Moshe Moscowitz casts the Purim story in comic-book format, targeting an age group capable of understanding many of the complexities of the Megillah.

Webbed Purim Fun: Among the Internet sites offering online Purim fun … a search will turn up such resources as this one for crafts. And this one includes pictures to print out and color; while this one for activities.

A Groggy Phone: Don’t have a regulation noise maker to raise the requisite ruckus every time the villain Haman’s name is mentioned in the Megillah? (Trivia fans should know: It comes up 54 times in the course of the reading.) Just download this app and keep everyone in the neighborhood on their toes.

On Your Mark, Get Set, Bake: Why restrict yourself to poppy seed and prune fillings? A neighborhood Creative Hamantaschen Contest could inspire bold new options (Hint: Jerusalem bakeries often boast such intriguing fillings as blueberry, cinnamon-apple and chocolate chip). Here’s a selection to get you started, including one featuring red pepper, cheese and corn, courtesy of Chabad.org.

Drive-In Partying: For congregations, the United Synagogue of Conservative Judaism has assembled a list of creative programming ideas to get their members in the holiday spirit. Among them are Zoom costume contests and carnivals (using breakout rooms for the different games), as well as drive-up Purim events, where groggers are distributed before the Megillah is read over the FM radio, mishloach manot are handed out, and charity is collected. To top it off, a juggler or balloon artist is a weather-dependent option.