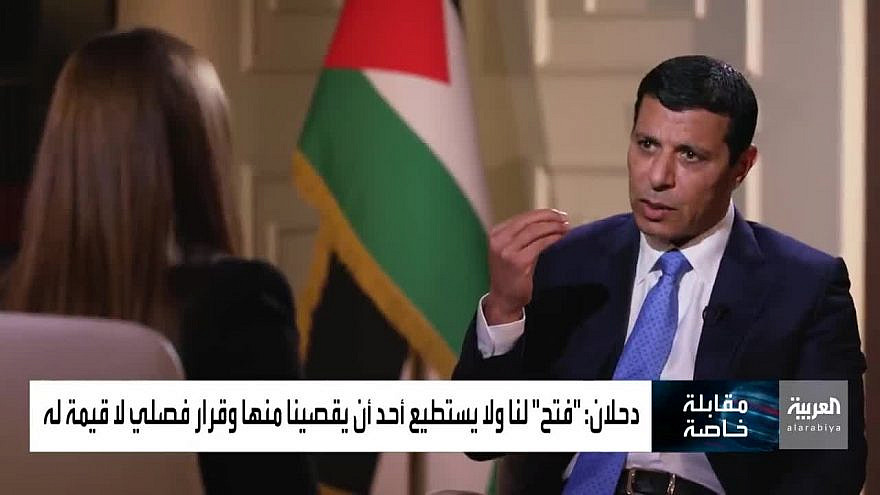 Palestinian Authority leader Mahmoud Abbas’s political rival Mahmoud Dahlan vowed in a recent interview that Abbas would not be the only candidate in the upcoming Palestinian presidential elections.

In an interview that aired on Saudi Arabia’s Al-Arabiya Network on March 17, the former P.A. security chief, who has been living in Abu Dhabi in recent years, said that Abbas’s 15 years in office amounted to “a big fat zero.” Not only has Abbas not fulfilled his promises to the Palestinian people, said Dahlan, but he “even destroyed what had been build in Yasser Arafat’s time.”

“My wish is to stand in front of the Palestinian public and recount [Abbas’s] achievements in the last 15 years. It is a big fat zero. I hope that he steps forward and talks about his achievements in the last 15 years. Our homeland was split between Gaza and the [West] Bank, and Israel reoccupied the West Bank. [Abbas] himself says that Israel humiliates and disrespects him, and that the settlements are growing in number and expanding. And the worst of all, he is instilling defeat into the Palestinian consciousness,” said Dahlan.

Dahlan went on to say that he and his colleagues in Fatah’s Democratic Reform Bloc want to let bygones be bygones and unite the Fatah movement. But Abbas, he added, did not want that.

Abbas’s only goal in the upcoming elections was to grant legitimacy to his continued rule, said Dahlan.