When Belgian professional road and cyclo-cross racer Wout van Aert took the 21st and final stage of the Tour de France and Slovenian cyclist Tadej Pogačar won the overall 2021 Tour de France on Sunday, there weren’t many Israeli riders in sight. Even without Israeli riders winning the race, this year’s Tour de France was an unprecedented victory for the Jewish state.

Israel’s Tourism Minister Yoel Razvozov was on hand at the finish line in Paris to greet the riders and show just how much Israel cycling matters.

“We are so proud to see an Israeli team carry the Israeli flag at one of the largest sporting events in the world,” he said. “Thanks to the partnership with the Ministry of Tourism, the team is promoting our brand of tourism to Israel throughout the race. Events of this kind are the biggest generators of tourism in the world, so it was important for me to come and learn about what is needed, and how it will be possible to bring major international sporting events to Israel on the day the skies open.” 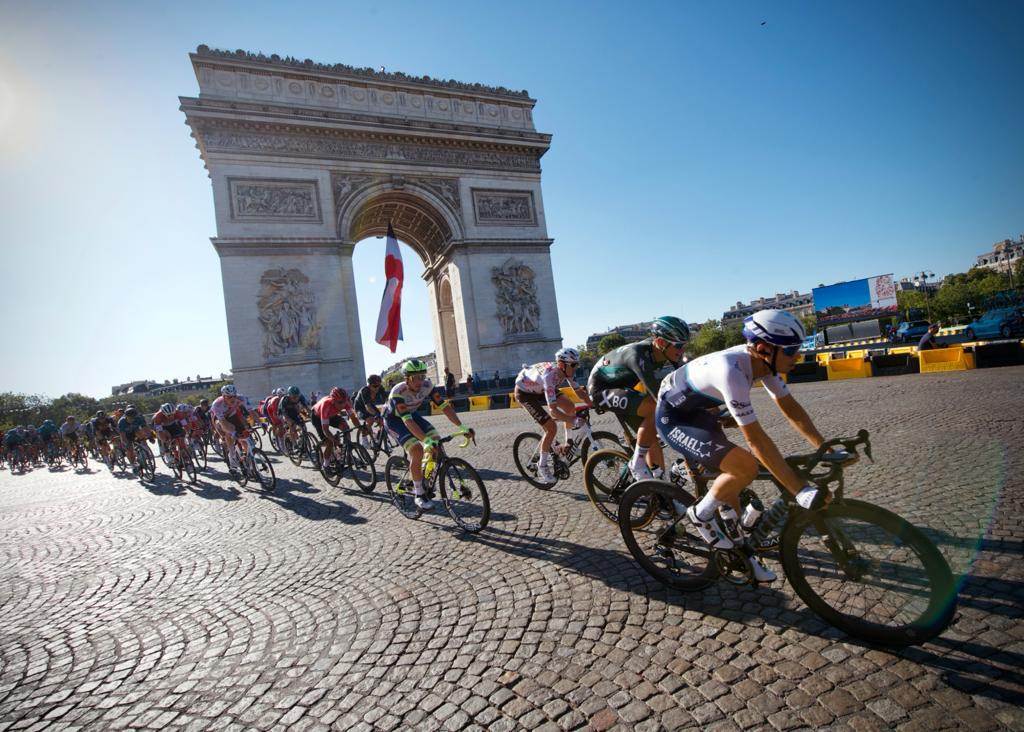 Adams is proud of Israel Start-Up Nation’s performance at this year’s Tour De France. “ISN’s second Tour represented another building block in the team’s growth. For the first time, we were on the podium, with Michael Woods earning the iconic polka-dot climber’s jersey,” he said. “We also had our share of bad luck, with terrible crashes destroying our GC hopes on the first day.

“But the team held strong and was cheered all along the roads of France, with shouts of Israel, Israel, Allez [Go!]! Also, allez Start-Up Nation in recognition of the team moniker and allez Chris Froome, in respect of our great four-time Tour winner. We have put the ‘Start-Up Nation’ on the world map. And a special mention of our Israeli Omer Goldstein for racing like a consummate pro, despite being in his first Tour de France.”

‘Quick to change focus and fight for new goals’

Israel Start-Up Nation boasted several noteworthy accomplishments throughout the three-week race, while also facing some challenges. It finished in the top 10 on nine stages and the top five on three occasions. Canadian Michael Woods took the KOM (red polka-dot leaders’ jersey with blue snowcapped mountains and the words “RIDE ON” at the base) after a big push on Stage 14. Woods finished both third and fifth during the Tour de France, while teammate Dan Martin of Ireland made the top five with an impressive performance on the final mountain stage.

Sports manager Rik Verbrugghe says the riders should be proud of the way they fought to overcome a difficult start to the race. On the first day, seven out of eight on the Israeli team were involved in several crashes. One was caused by a fan who stepped onto the course to unfurl a banner. “We had a challenging beginning, but we never lost morale, and the guys were quick to change focus and fight for new goals,” he said. The Tour concluded three weeks later in Paris with the traditional finish on the Champs-Élysées. The Israeli team finished with a strong performance as André Greipel of Germany sprinted to fifth place. The final stage—Stage 21, 67 flat miles (108 kilometers) from Chatou to Paris at the Champs-Élysées—concluded with Israel riders Omer Goldstein in fifth place, Rick Zabel 23rd and Guillaume Bovin 29th.

Greipel had recently announced that this would be his final Tour de France. His teammates, mindful of what this race means to him, positioned him near the front for the sprint and at the end.

“This was an emotional day, knowing that I would take on my last Tour de France stage. In the sprint, due to the new finish, everybody gambled a bit in the headwind, and I guess I gambled a bit too much,” reported Greipel, who vocalized wishing he finished even higher in the pack. “I would have liked a better result, so there is some disappointment now but also relief as I could finish another Tour de France.”

Goldstein spoke more succinctly and playfully at the finish line. “It was the hardest and most enjoyable race of my life. What do I want now? To rest, and leave the bike … ”