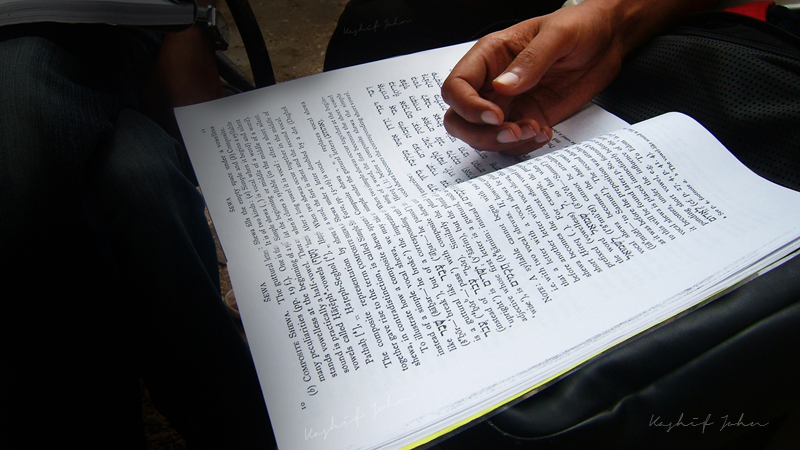 A recent article (by Elaine Samuels, on Facebook and in the Israel Telegraph online) recounted the trials and tribulations she experienced in her efforts to learn and speak Hebrew. This triggered long-dormant memories of my attempt to learn Hebrew.

Although it’s many years since I underwent that process, the memory came back as if it had been just last week. In my day (some fifty years ago) there was no internet, no ‘Tel Aviv Café’ and in fact computers hadn’t been invented. Learning a language was a lengthy and complex process involving frontal lessons, written homework and much pain.

The concept of the ‘ulpan’ (intensive immersion in a language) was developed to a fine art in Israel, and sometimes even involved a residential option. The idea is to classify students by level of fluency in Hebrew and assign them to classes accordingly.

But when I came to Israel, in the late summer of 1964, no ulpan would accept me. The university term was due to start in late October, and because I made it clear at the outset that I was not going to be able to complete the course I was refused admittance wherever I applied.

And so, completely unprepared as far as the language was concerned, I embarked on my M.A. studies at the Hebrew University of Jerusalem, while at the same time working as a research assistant there. Luckily, my work in the Department of Sociology was based primarily on my ability to read and understand (and edit) the English texts produced by various members of the teaching staff. An attempt was made to test my ability to translate from Hebrew into English, but my ignorance of basic terms soon made it clear that this was not a good idea.

I would sit in lectures or seminars given in Hebrew, trying frantically to catch a word or two that I could understand, and attempting to work out the gist of what I was hearing from that. Obviously, that did not get me very far, and what with one thing and another (war, marriage, children) I never completed that degree.

When my daughter was born I stayed at home to look after her. In my isolation I would listen to the radio, and eventually managed to benefit from some of the programs. One of my favorites was ‘For the Housewife,’ hosted every morning by now-famous actress Rivka Michaeli. This consisted of a potpourri of five-minute talks by various experts. One of these was a chef who provided useful recipes, another was a children’s doctor who doled out advice in a soothing voice, and yet another was the (female) editor of a newspaper who would talk about matters of the day, and so on. In between musical interludes Rivka Michaeli would interview artists, musicians or any other personality who was invited to the studio, and this, too, gave me some insight into what was happening in the world around me.

In effect, that program was a useful introduction to life in Israel (my years at the university had kept me isolated from general Israeli society). In addition, somehow along the way I managed to pick up enough Hebrew to enable me to go on to my next career, as a translator of Hebrew texts into English.

So it would seem that the standard form of language teaching in Israel is not the right approach for everyone. I was lucky in having very little option but to listen to the radio when my children were small. And once they went to kindergarten and school the Hebrew language made its way into our daily life. My efforts to speak English with them were met with less and less success, though there are still vestiges of English in our communication with one another.

Even my grandchildren can communicate in English to some extent, though whether that’s due to my efforts or their need to keep up with the world around them is debatable.