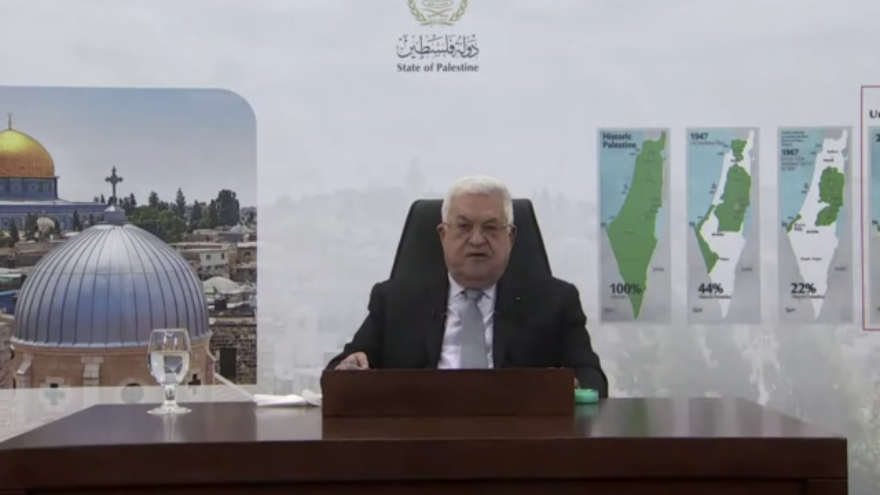 In his address to the U.N. General Assembly on Friday, Palestinian Authority leader Mahmoud Abbas demanded that Israel return to its pre-1967 borders or face consequences.

“If the Israeli occupation authorities continue to entrench the reality of one apartheid state as is happening today, our Palestinian people and the entire world will not tolerate such a situation,” he said in a pre-recorded video. “Circumstances on the ground will inevitably impose equal and full political rights for all on the land of historical Palestine, within one state.”

Abbas, who accused Israel of “apartheid” and “ethnic cleansing” in his speech, which included a backdrop of the Al-Aqsa mosque in Jerusalem as well as a series of maps that purportedly show Israel’s territorial expansion over the past several decades, threatened to reconsider recognition of Israel if the country did not return to negotiations and end its “occupation.”

“If this is not achieved, why maintain recognition of Israel based on the 1967 borders?” he asked, threatening to confront the Jewish state at the International Court of Justice in The Hague. That court is currently investigating Israel for alleged war crimes committed since 2014.

“Why should we have to clarify and justify providing assistance to families of prisoners and martyrs, who are the victims of the occupation and its oppressive policies? We cannot abandon our people, and we will continue striving to free all our prisoners,” said Abbas.

The P.A. leader’s speech comes amid deepening unpopularity among Palestinians; a recent poll found that 80 percent want him to resign. Earlier this year, Abbas, who has remained in office despite his term expiring in 2009, announced Palestinian legislative and presidential elections, only to later cancel them in May.

While Israeli Prime Minister Naftali Bennett has ruled out establishing a Palestinian state under his watch, ties between Israel and the P.A. have thawed in recent weeks. Israeli Defense Minister Benny Gantz met with Abbas in late August, the first high-level contact in years. The Biden administration has also pushed to renew ties with the P.A., restoring humanitarian aid and funding for the United Nations Relief and Works Agency for Palestine Refugees (UNRWA), while looking to reopen its consulate to the Palestinians in Jerusalem and its mission in Washington, D.C.

“In his speech at the U.N., Abu Mazen proved once again that he is no longer relevant. It is no coincidence that 80 percent of Palestinians want him to leave his position. He once offered to sue the United Kingdom over the Balfour Declaration. Today, he wants to return to the U.N. Partition Plan. But most important of all, he lied about the Palestinians refusal to make peace. Those who truly support peace and negotiations do not threaten delusional ultimatums from the U.N. platform as he did in his speech.”