Home News Israel At US embassy in Jerusalem, Bennett reiterates return of bipartisan support for... 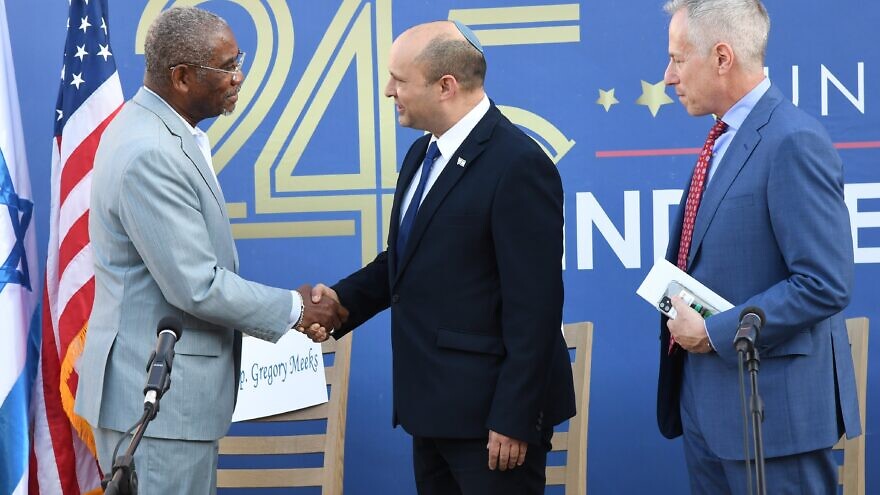 A bipartisan group of members of the U.S. House of Representatives and Israeli officials celebrated Independence Day on Tuesday at a small event hosted by the U.S. embassy in Jerusalem.

Israeli Prime Minister Naftali Bennett was on hand to welcome the visitors—the first official congressional delegation to travel to a foreign country since the start of the coronavirus pandemic.

Since COVID required the number of attendees to remain low, the program was also livestreamed by the embassy.

In English, Bennett welcomed the guests by recalling his upbringing in the United States.

Bennett said that the same values inspired Israel’s founding in 1948. But an even deeper connection, he said, was in the inspiration the founding fathers found in the Hebrew Bible, the Tanach, when creating the United States.

The prime minister also highlighted the ideological and racial diversity in his government and noted that he will strive to make the relationship between the two countries be bipartisan.

“You know, Israelis across the political spectrum are fundamentally pro-American. We like America. We appreciate, we admire what you’re doing. And that’s the way it ought to be also in America vis-à-vis Israel,” he said. “And I’ll challenge any attempt to make America a partisan political issue in Israel and any attempt to make Israel a partisan political issue in the United States. Our policy is bipartisan. We’re friends of everyone. Because the friendship between our two democracies will always transcend party politics.”

‘We are going to be better’

Bennett was followed at the lectern by House Foreign Affairs Committee chairman Gregory Meeks (D-N.Y.), who led the delegation for the first time as chairman of the committee.

Israel, the United States and members of Congress, affirmed Meeks, share the same values, making up an unbreakable bond between the two nations.

“When we come to Israel, we don’t come as Democrats or Republicans; we come as members of the United States Congress,” said Meeks.

Meeks commented on the composition of Bennett’s government—the most diverse in the history of Israel—saying it will make for a better tomorrow.

Meeks, the first black chairman of the Foreign Relations Committee, said he owed a debt of gratitude to Jews who stood alongside Martin Luther King Jr. and African-Americans during the heyday of the civil-rights movement, without which he would not be where he is today.

Meeks concluded his speech with the reasons the delegation picked Israel as its first foreign trip.

According to a news release on Monday, the delegation will next travel to Qatar, where it plans to address issues of mutual concern, including regional security threats and interests, in addition to the normalization agreement between Arab countries and Israel as part of the Abraham Accords.