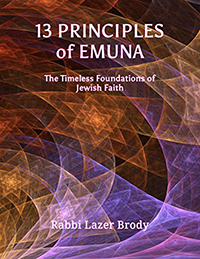 Born in Cordoba in 1135, but living his adult life in Fostat (Old Cairo) Egypt until his death in 1204, Maimonides’ brilliance and leadership earned him the title nagid, a prince of Egyptian Jewry. He is the author of numerous and important philosophical and theological books and treatises. Among these is his code or doctrine of beliefs, a distillation of the foundation of Judaism developed from the Hebrew Bible and its traditions, and produced perhaps because Judaism, lacking a central authority, known as the Sanhedrin, since its disestablishment by Roman Emperor Theodosius II in 425, failed to produce a concise core of Jewish beliefs.

Emuna is the Hebrew word for faith, and in his newest book, 13 Principles of Emuna, Rabbi Lazer Brody passionately reexamines Maimonides thirteen assertions, ranging from the fervent belief in one God to acknowledging the future resurrection of the dead and the coming of the Messiah, through a traditional orthodox-Jewish frame of reference. Yet one can’t help but feel a sense of personal bewilderment in his writing. On the one hand, perhaps as a former member of the Israeli Defense Force, he knows full well that foxholes hold no atheists, as such, true faith, emuna, must lie within the human soul for it to emerge in times of desperation. On the other, why can’t the same emuna be part and parcel of our ordinary lives?

Brody, declaring faith to be the underpinning of Judaism, asserts that although most Jews believe in God, Jews in general cannot say what Judaism believes in, and this is true even for Torah-observant Jews. Faith has a deeper meaning for Brody, it is commitment to a lifestyle with complete trust in God, a sentiment forgotten because of “rote habit and life’s challenges.” For him, the importance faith is that true faith leads to truth.

Brody points out four hurdles each person must overcome to reach true faith: Rejecting biblical prohibitions and substituting some “-ism,” a new belief system granting absolution and permitting the bans; overcoming the feeling of hubris, the human trait of arrogance and self-importance, leading to many false and sometimes dangerous views; following the crowd and the pressures of society, resulting in error and sin; and understanding that the Hebrew Bible speaks to humans who have a finite capacity—all corporeal imagery found in the Bible are symbols and analogies, not fact.

In 13 Principles of Emuna, Brody shows that true faith goes above and beyond both belief and reason because “with emuna, a person derives conviction, commitment, inner strength and above all, inner peace.”