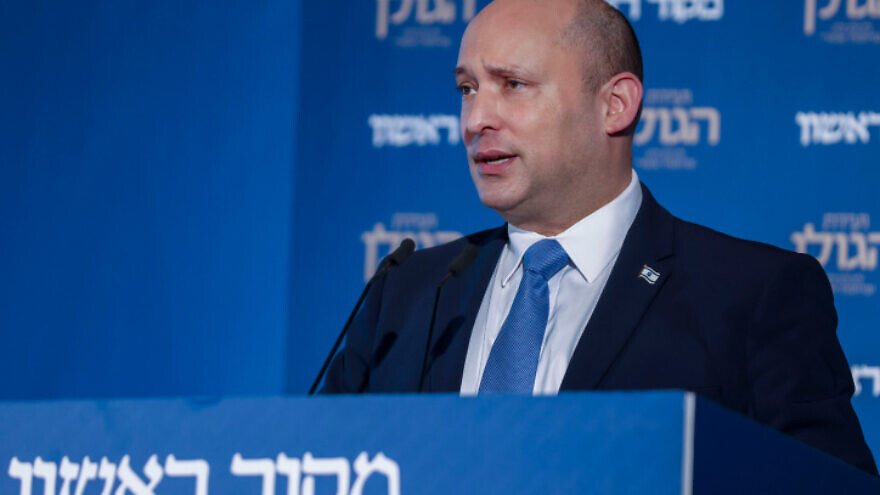 Israeli Prime Minister Naftali Bennett said on Monday that Israel would approve a “national plan” for the Golan Heights in six weeks’ time, calling the development of the area a “strategic goal” for the country.

“Exactly 40 years ago, the government of Israel, led by Menachem Begin, made an incredibly brave and important decision: to apply Israeli law to the Golan Heights,” said Bennett at the Makor Rishon Golan Heights Economic and Regional Development Conference in the southern Golan town of Hispin.

“Almost three years ago,” he continued, “we were informed of another significant development: the decision of the previous American administration to recognize the Golan Heights as part of Israel—a perception that has been adopted by the current administration.”

The premier noted that while there was “wall-to-wall agreement” regarding the Golan Heights, with the slogan, “The People are with the Golan” being familiar to every Israeli child, the Golan’s potential was far from being realized.

Prior to the conference, said the prime minister, he had met with regional council heads and businesspeople, reiterating that the government’s goal was to double the communities of the Golan.

“My directive in this context is unequivocal,” he said.

“In six weeks, we will hold a Cabinet meeting at which we will approve a national plan for the Golan Heights. Our goal is to double, and double again, the number of residents in the Golan Heights. The establishment of two new communities, jobs and more investments in infrastructure,” said the prime minister.

The government is working on a plan that will change the face of the Golan, said Bennett, and will allocate the necessary resources to implement it.

“This is the obligation of the government that I lead—and we will live up to it,” he said.

From the Golan, Bennett then addressed the situation in adjacent Syria, saying that Israel was closely monitoring the situation there.

“For more than a decade, Syria has not known stability,” said Bennett. “We are closely—very closely—monitoring what is happening in Syria, and its ties with Iran. Iran, which has dispatched proxies and built armies to surround the State of Israel, aspires to build yet another army on the border of the Golan Heights,” he added.

Israel, he went on, would continue to act “wherever and whenever necessary, at our initiative and on a daily basis,” in order to roll back Iran’s presence in the country. The Iranians, he said, “have nothing to look for there. Their adventure on our northern border needs to end. Thus, we will ensure not only the peace of the residents of the Golan Heights but that of all citizens of Israel.

Bennett emphasized, however, that Israel’s position on the Golan Heights was not connected to the Syrian situation.

“True, the horrors that have been taking place there [in Syria] for a decade have convinced many in the world that perhaps it is preferable that this beautiful and strategic piece of land be in the hands of the State of Israel—that it is preferable that it be green and prosperous, rather than yet another arena for killings and bombings.

“But even in the situation, which could happen, in which the world changes direction regarding Syria, or regarding the Assad regime, this has no connection to the Golan Heights. The Golan Heights is Israel, period.”