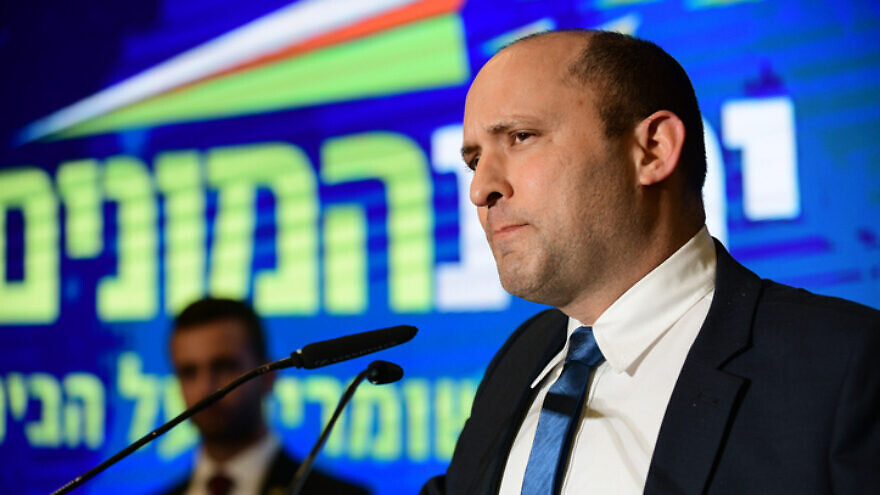 Yamina Party leader Naftali Bennett on Wednesday reiterated that he will not back Israeli Prime Minister Benjamin Netanyahu or join the center-left bloc of Yesh Atid chairman Yair Lapid after the March 23 elections.

With Yamina projected to win 10-11 Knesset seats, Bennett has emerged as a kingmaker in the coming political battle and has made no secret of his eyeing the Prime Minister’s Office.

“Yamina will not join a left-wing government, not even under Lapid,” he told Army Radio. “The public has to choose—it’s either Bibi or Bennett,” he said, using Netanyahu’s nickname.

As for the possibility of joining a government that includes his former ally, Religious Zionist Party leader Bezalel Smotrich—who has joined forces with far-right Otzma Yehudit Party leader Itamar Ben-Gvir and the radical haredi faction, Noam—Bennett said, “We’re against boycotts, so we will partner with anyone who is in favor of [Israel as] a Jewish and democratic state.”

Meanwhile, Netanyahu on Tuesday made Shas Party leader Aryeh Deri and United Torah Judaism Party leader Moshe Gafni pledge in writing that they will support him for the role of prime minister following the elections.

Netanyahu has also reportedly demanded that Smotrich sign a similar pledge, but the latter refused.

“Such promises have proved useless in the past and I have no intention of signing one,” the Religious Zionist Party head said in a statement. “We are committed solely to the [right’s] values and path and we will be part only of a government that expresses them.”

Lieberman panned the move and called on Lapid, New Hope Party leader Gideon Sa’ar and Bennett to commit to joining forces after next month’s elections.

Also on Tuesday, 130 former and current defense officials published a letter urging Blue and White leader Benny Gantz to withdrew from the Knesset race. Blue and White has been teetering on the brink of the four-seat electoral threshold, with some polls giving it, at best, five seats, and some projecting its demise.

These votes, the letter contended, could give another center-left party—one with better chances of getting elected—a much-needed electoral boost that could eventually help the bloc come to power.

The letter stressed that its signatories believe that another Netanyahu term would endanger Israel, and urged Gantz to put his ego aside and make sure that the center-left bloc is in the best possible position to oust Likud from power, Channel 12 News reported.

“It is clear that it is not the coronavirus, but a prime minister facing criminal charges who is placing the public in harm’s way to save his rule and his own skin. It is time to make a bold decision,” the letter asserts.

“Benny [Gantz], it is time to make one last leadership call and exit this race. [Blue and White] is likely to fall below the electoral threshold. Do not be party to a terrible waste of votes that could go to the camp trying to effect change. Israel is wounded. Israel will salute you. It is time to put Israel first.”