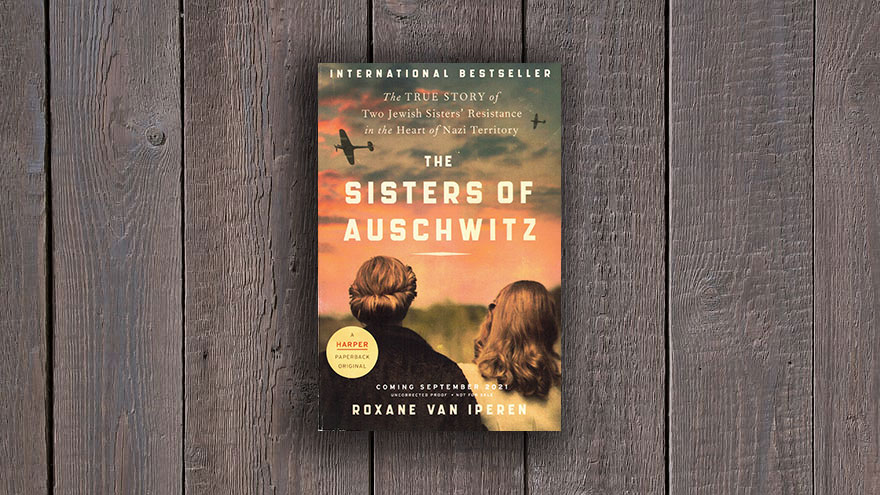 This is a biography of two Dutch Jewish sisters who survived much of World War II living under assumed identities in a country villa located on a high knoll in the middle of the woods near Amsterdam.  They were seemingly so secure from prying eyes that on occasion they were able to hold musical evenings with a score of hiding  Jews, leftists and resistance members while putting thoughts about the Nazi occupation of their country aside, at least temporarily.

The author, Roxane Van Iperin, knows all about The High Nest, as the villa was called, because she moved into it many years after the fact, and was startled to find throughout the house numerous hiding places, built behind false walls and under floors.  Wanting to ferret out the story of who had lived there, their efforts to foster resistance to the Nazis, and what became of them, Van Iperin researched in great detail the lives of sisters Janny and Lien Brilleslijper, and their families and associates.

The book’s original title in Dutch translated to the “High Nest,” which was appropriate because the story of this safe house is unique, whereas later chapters in the book, while interesting, are not unique in dealing with the Brilleslipjer sisters survival through internments at the Westerbork transit camp in Holland, Auschwitz-Birkenau in Poland, and Bergen-Belsen in Germany as well as via forced transport in stifling, overcrowded, unsanitary cattle cars between those camps.

We can assume that someone at Harper/Collins must have thought that titling the book as The Sisters of Auschwitz would prove commercially more successful than utilizing the relatively unknown venue of the High Nest in the title.  This may make sense from the standpoint of getting people to pick the book off a shelf at a book store–or while scrolling through titles on Amazon–however, the decision gives a false sense of the book’s essence.

Whereas in Auschwitz, the sisters were prisoners hoping to survive the “selections” that could send them to the gas chambers, at High Nest they had individual agency– the decisions they made were of their own volition.  They could play with their children on the meadow near the house, or go hiking through the woods, or picnic, or walk to a viewpoint where they could see reflections in the waters of a nearby lake.  They could discuss politics; listen to war news on a forbidden radio, offer shelter to those escaping from Nazi roundups; help distribute pamphlets and other literature produced by the resistance, and carry on a full life reflecting their values.  They had what they hoped was a full proof system for warning people not to come near if the villa was in danger.

There is an unforgettable scene when following their arrest at High Nest, family members are thrown into a van, and Janny propels herself against a Nazi captor to enable her common-law brother-in-law, Eberhard Rebling, German Christian who had declined to serve in the German army, to make his escape.  That she wasn’t shot on the spot was a miracle.

From there, the biography is told at times in near stream-of-consciousness fashion as the sisters and their families endure the privations, and at times become so exhausted and delirious they have difficulty separating reality from their near sleepless, starved reality.

Of particular historic interest is that the Brilleslipjer sisters were shipped from Amsterdam to Westerbork on the same transport as the famous teen diarist Anne Frank and her family, and thereafter the Brilleslipjers and the Franks had parallel experiences all the way to Bergen-Belsen, where Anne and her sister Margot died of typhus.  The Brilleslipjers provided testimony about the more famous Dutch sisters’ demise and these accounts are incorporated into the story.

Author Van Iperen is an attorney, and at times the narrative of the book moves as slowly as a lawyer’s brief.  But the pace picks up in other chapters, only to slow down again after the sisters are liberated from Bergen-Belsen.  The biography won’t keep you at the edge of your seat, but will fill in some crevices in the story of the Holocaust and the Dutch Resistance.