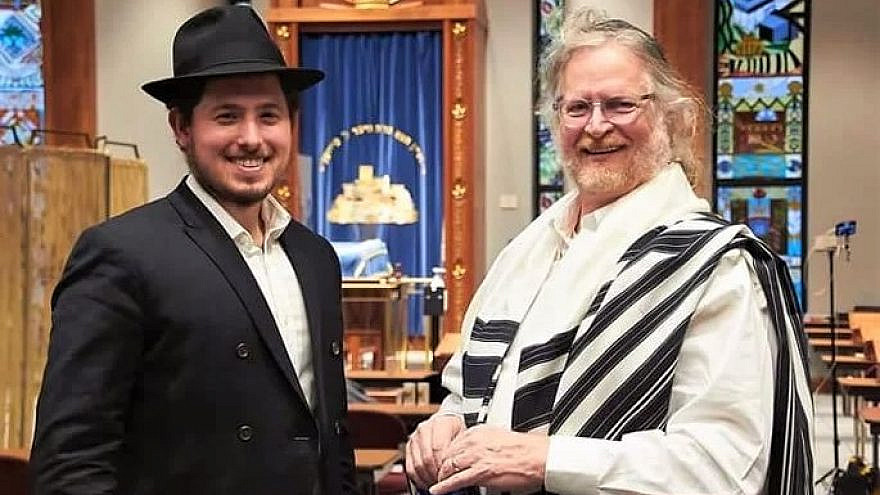 “My family were hidden Jews, but not anymore. With this coming of age ritual, I’m proudly reclaiming my Jewish heritage,” said Robert Powell, a 65-year-old Wisconsinite about his recent bar mitzvah at Chabad of Mequon, Wis.

His mother and her sister were raised in Hamburg, Germany. They were fortunate to flee in 1939 shortly before Poland fell to the Nazis, but not before the escalating persecution of Jews was woven into the fabric of their childhood. They experienced things that no children ever should. Anxiety and fear were encoded in their genes and became part of their psyche.

With the support of their parents, they made a pact to suppress their Jewish identities. True to their word, they took their secrets to the grave. Discarding all documents and photographs that might reveal the family’s Jewish ties, they refused to discuss their lives prior to arriving at Ellis Island.

Robert grew up knowing literally nothing about Jews and Judaism. His father was an Episcopalian with a heritage tracing back to England and Wales. Before college, he had barely even met a Jew. His cousin David, on the other hand, always felt drawn to the Jewish faith. He felt deep down that he was Jewish; it was in his soul. Discovering that they had relatives in Germany, Argentina and Brazil, he discerned that they were either Nazis or Jews. The more his questions were met with silence and denials from his mother and aunt, the greater the fire in his belly to dig deeper. His yearning for the truth started his search into his genealogy.

Relatives from Germany had visited the week before and brought proof positive from the Stolpersteine Project, which remembers the victims of the Holocaust by installing commemorative plaques with their names on stones in front of their last address. They had documented not only Robert’s maternal family tree dating back several generations but a narrative and biographical information to accompany it as well. Robert’s great-grandmother and her sister-in-law were murdered in Auschwitz. Two of her siblings swallowed cyanide capsules like thousands of other Jews in Nazi Germany so as not to suffer the same fate—to preserve their dignity even in the face of death. There was correspondence between relatives expressing how disheartened they were to hear about the pact his mother had made with her sister to conceal their Jewish heritage from their children.

After being kept in the dark for years, it was difficult at first for Robert to grasp the shocking disclosure … how something so evident, like one’s religion and identity, became a well-kept family secret.

‘Teaching me about Judaism ever since’

A year ago, the subject line of an email from Mequon Torah Center caught his eye. A decade earlier, Robert attended the bat mitzvah of one of his daughter’s middle-school friends at Chabad of Mequon and wrote his email address in the guest book. He had been receiving weekly emails from them ever since, which went unread. Robert filled out the short survey sent out by my son, Rabbi Doobie Lisker, newly appointed educational director at Mequon Torah Center, directed by Rabbi Dovid and Faige Rapoport. Robert noted that he had recently found out that he was Jewish and would like to explore his true self—the Jew he always was.

Intrigued by Robert’s response, Doobie arranged to meet up with him and hear his story. “He has been teaching me about Judaism ever since,” said Robert. “From our first meeting, I just wanted to be like him. He embodies the values that are inherent and central to Torah: morality, meaningful living, kindness, ethics and righteousness. I hold him in the highest esteem.”

With the zeal of an investigative reporter, Doobie reviewed the Stolpersteine Project’s records and researched Robert’s maternal lineage further. Employing the Chabad worldwide network, he contacted Rabbi Yehudah Teichtal in Berlin, who connected him with an organization where he was able to procure Robert’s grandparents’ Hamburg Jewish tax cards proving that in the Hamburg Jewish community they were known to be Jews. After gathering all the supporting evidence, Doobie consulted with a rabbinical expert in Sydney, Australia, who determined that Robert is indeed a full-fledged, halachically accepted Jew. Next, Doobie arranged for Robert to have a brit milah and he was named Yitzchak.

Judaism resonated immediately. With Doobie’s guidance, Robert began to wrap tefillin regularly and set goals for himself working towards learning more and committing to mitzvot, one at a time. But as he began making the transition back to Judaism, he encountered a variety of personal dilemmas and insecurities.

At times, he felt vulnerable and incomplete because he was not a “fully-formed” Jew. He grew up without the embrace of a Jewish community and lacked that essential factor of the Jewish religious practice and experience. He often worried that his (now fellow) Jews wouldn’t want to embrace him because he was a “diluted version” of what was supposed to be Jewish.

Robert knew deep down that he was being disingenuous not only to them but also to himself and his ancestors, whose sacrifice and exceptional courage kept our Jewish legacy alive. And then, with Doobie at his side—with the Rapoports and his newfound community at Chabad of Mequon—a journey of self-love and acceptance began. Slowly but surely, a tremendous burden was lifted. He was living his authentic life with a sense of peace and belonging.

‘I carry my life on my back’

A few months later, Robert began toying with the idea of having a bar mitzvah to confirm his identity. He said that one of Doobie’s famous sayings—“Never put off a mitzvah”—made him actualize his plans.

A soft white carpet of snow covered the asphalt, and barren boughs of trees coated with ice crystals glistened in the sun on that perfect Thursday afternoon on Jan. 7, 2021. The sanctuary was filled with 10 close friends and family members, while many others joined via livestream due to COVID-19.

Robert, who had celebrated his 65th birthday the day before when his Jewish and secular birthdays coincided, stepped up to the bimah wearing his tefillin and newly purchased tallit, in addition to a wide and contagious smile not unlike those seen by proud 13-year-old boys celebrating their Jewish milestone.

“For a 13-year-old, a bar mitzvah is a starting point of the teenage and then adult years,” began Robert. “For me, I carry my life on my back—my bar mitzvah is an arrival, an affirmation, a coming home. My bar mitzvah firmly links the past with the present. If we don’t understand where we’ve come from, how do we understand who we really are?

“My ancestors overcame many obstacles—oppression, fear, tyranny,” he said. “But they persevered, and they did it with dignity, bravery and the determination to keep alive our Jewish heritage. Our legacy. Our Jewishness. It only remains for me to honor them by living fully and openly as the Jews we were and always will be.”

Reprinted with permission from Chabad.org/News.