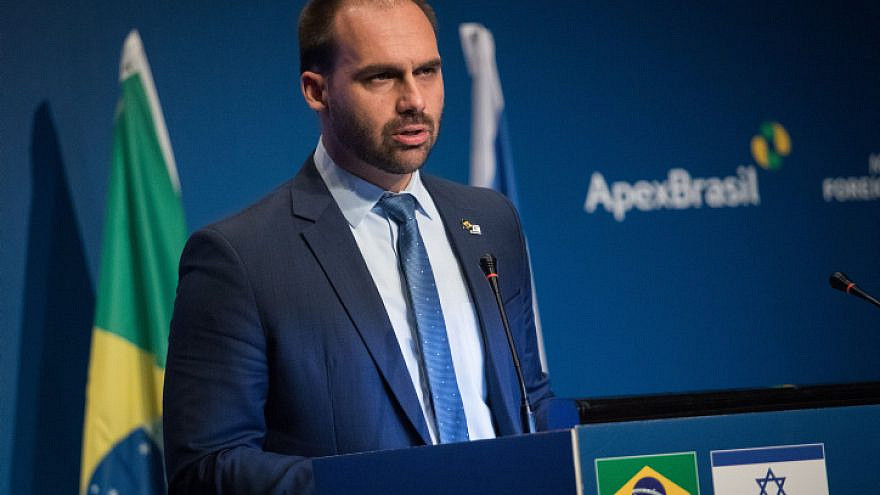 Eduardo Bolsonaro, a member of the Chamber of Deputies for São Paulo and the son of Brazilian President Jair Bolsonaro, told Israel Hayom in an exclusive interview on Tuesday that he will work to designate Hezbollah a terrorist organization.

Several hours before flying back to Brazil from Israel, the third son of the Brazilian president discussed his three-day visit to Israel—as part of a delegation that included Foreign Minister Ernesto Araujo—that focused on combating the coronavirus pandemic.

Bolsonaro hailed Israeli technology and expressed cautious optimism about the fight against COVID-19, which has claimed nearly a quarter-million lives in his country.

As for Hezbollah, Bolsonaro said the Iran-backed Lebanon-based organization sworn to Israel’s destruction “cannot be considered a normal political body, and similar to the FARC (Revolutionary Armed Forces of Colombia) guerillas, it is not a diplomatic arm. These are criminals, terrorists,” said Bolsonaro, noting the deadly attacks perpetrated by the Shiite organization in the 1990s in Argentina.

“Hezbollah maintains a prominent presence in the Triangle Frontier [between Argentina, Paraguay and Brazil],” he said. “Most of their activity there revolves around money-laundering and trade, rather than terror.”

Bolsonaro added that Hezbollah is also “very strong in Venezuela. They have a safe haven there under President Nicolas Maduro. All you need to know in this regard is that Maduro’s deputy was Tareck El Aissami, a Hezbollah member, and this cannot be denied.”

As such, the son of the Brazilian president vowed to work to designate Hezbollah a terrorist organization and confirmed discussing the matter with Israeli Foreign Minister Gabi Ashkenazi.

“I think we should have done it already,” he said. “But right after I return [to Brazil], I will put the matter back on the table with the defense minister and president.”

Araujo, Brazil’s foreign minister, meanwhile, told Israel Hayom that his delegation’s “excellent visit focused on the fight against the coronavirus.”

“The meeting with Prime Minister Benjamin Netanyahu and Foreign Minister Gabi Ashkenazi prove that Brazil and Israel have an unprecedented relationship, and this translates into concrete [action],” said Araujo.

The Brazilian foreign minister noted the defense agreement between the two countries dating back to 2019, and stressed that Brazil “wants a continent free of terror and corruption.”

When asked about Iran, Araujo said that the issue wasn’t discussed with Israeli officials during this week’s visit, but reiterated that he is aware of the concerns in Israel and “also among Gulf states.”