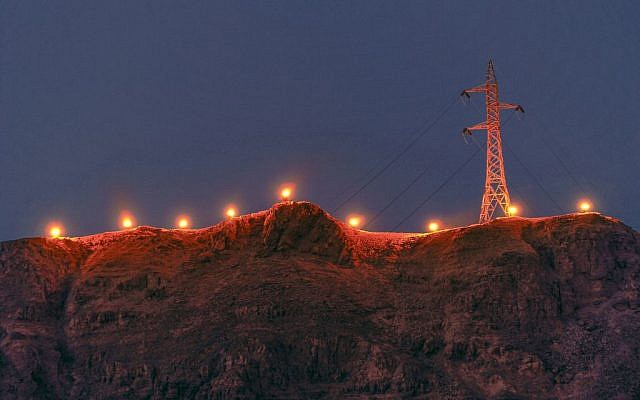 Why, yes it is. Because, after 18 months (but who’s counting?) of a tourism draught, Israelis are noticing the return of international visitors (some actually do have cameras strapped around their necks), signified by the sudden reappearance of tour buses ferrying eager individuals and families from site to site.

This pent-up flurry of tourism follows the Israeli government lifting its ban on visitors on Nov. 1 (prior to that date, with few exceptions, the only way to enter Israel was by making aliyah or laying claim to a first-degree relative there).

And now, along with the tourists, Israelis are seeing the return of Birthright Israel groups (you actually hear them coming—in the form of exuberant laughter and song—before you see them). And, it appears, they’re back for good. Organizers expect to send some 6,000 Jewish young adults on an Israeli journey before next March. As they say in a release: “Birthright trips will immediately begin positively impacting Israel’s economy and help rebuild relationships between participants and the country once again.”

So if you’re planning on giving yourself and your loved ones the gift of an Israeli Hanukkah, which begins on sundown on Sunday, Nov. 28, and lasts through Monday, Dec. 6, you’re in for a treat.

You can start by conjuring up the fragrance of authentic Israeli sufganiyot (doughnuts filled with jelly and, in recent years, every imaginable filling from peanut butter to chocolate mousse to banana cream). It’s the perfect dessert to top off your family’s traditional latkes. And just envision the sight of nighttime streets dotted with glass cases protecting menorahs—and their twinkling lights—from the elements.

You’ll want to keep your rental car keys at the ready as we’re going to do some rapid crisscrossing of the country during this mad-cap tour. Note: You also may wish to keep your vaccine or recovery documents handy and/or negative PCR test results (as well as that ubiquitous mask), for gaining admission to many of the following events, especially those happening indoors.

All this fun is traceable to the brave Maccabees. Judah Maccabee and sons led the revolt against the powerful Syrian-Greeks and were given a victory that was nothing less than miraculous, allowing them to recapture and rededicate the Holy Temple in Jerusalem.

The other half of that miracle—that the one-day supply of pure oil lasted for eight full days until reinforcements could arrive—has made such oily treats as latkes and sufganiyot Hanukkah traditions, nearly 2,000 years after the fact. To visit the place where these miracles transpired look no further than Modi’in, perched between Jerusalem to the southeast and Tel Aviv to the northwest.

The first day of the holiday is an opportune time to connect with the history of Hanukkah by visiting the Hasmonean Village in nearby Shilat. For 42 years, Zohar Baram has been running this reconstructed village where you can learn all about what it was like to live in this place during the time of the Maccabees. Here you can try your hand at working a grindstone and an olive press (back to the oil theme) and make olive-oil candles, plus watch demonstrations of coin casting, enjoy a live performance and see some of the herbs that were in use at the time. (The hours on this day and through Dec. 5 are 10 a.m. to 4 p.m. Call 08-9761617 or 054-448-0463 to save your spot.) 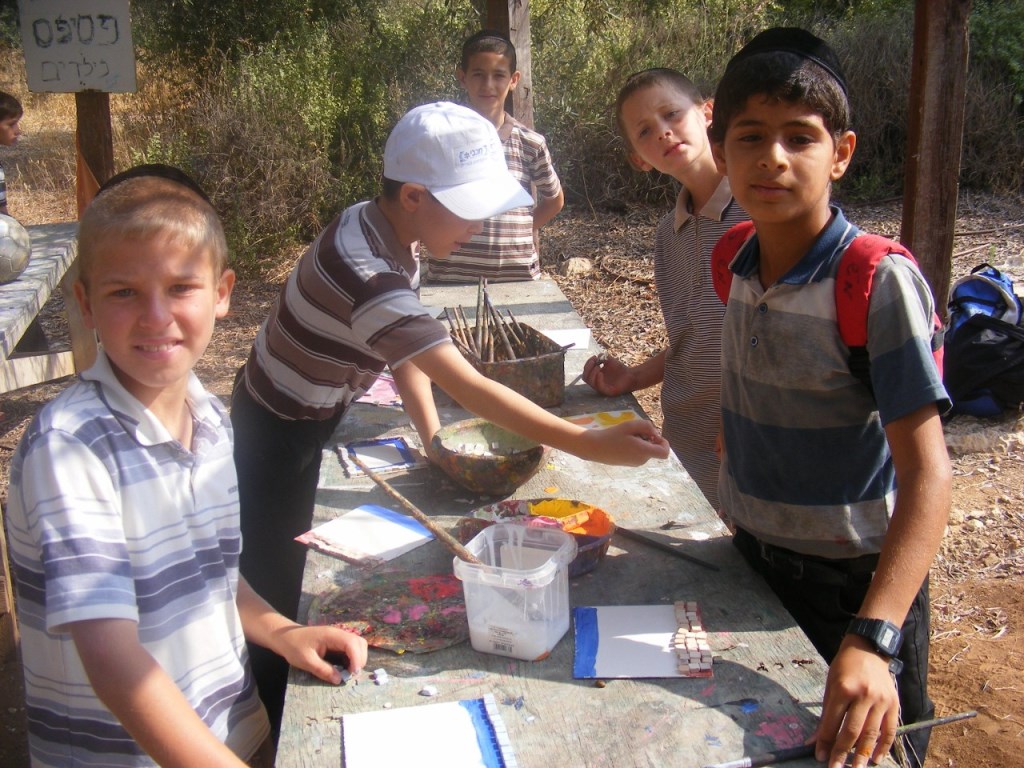 Beginning at 5 p.m., you can cheer on the sidelines of the Jaffa Hanukkah parade, which originates at Bnei Brit Community Center in Jaffa at 23 Isaac Harif St. Follow the crowd as it wends its way through some of the area’s most historic Old City streets, culminating in a menorah-lighting with musical performances.

And if you happen to be in the area on Saturday, Dec. 4, you’re invited to join a special English-language menorah tour beginning at 5 p.m. at 2 Marzuk and Azar streets in Jaffa. Highlights include artists’ homes, galleries and studios where beautiful and often historical menorahs will be on display. Walkers will also enjoy stories of life in ancient Jaffa throughout the years with dating back to the Greek and Hasmonean periods while taking in some special city vistas. The tour is given free of charge.

And you might want to see (and sample) the dazzling selection of sufganiyot at the Roladin bakery. All its locations around town (including in the famed Dizengoff Center at 49 Dizengoff St.) offer such mouth-watering flavors as Banana Coffee.

If you’re in need of a few Hanukkah gifts, opportunities in Tel Aviv’s include the crafts fair selling the work of some creative Israelis every Tuesday and Friday in the Nahalat Binyamin neighborhood and the adjacent fun and funky Carmel Shuk, the perfect place to stock up on “I love Israel” boxer shorts and other tasteful souvenirs for the folks back home.

Head south to catch the last day of the “Festival of Lights” in the beachside city of Eilat. The event at the entrance plaza to the Ice Mall, at 8 Kampen St., on the North Beach celebrates Hanukkah with a giant light display, “living sculptures” and assorted performances. The fun starts at 5 p.m.; admission is free. Note: The festival also runs the two evenings prior. Also, if you’re in town at 10 a.m., you might want to take in Yoga on the Beach, a free program adjacent to the Dan Eilat Hotel on North Beach. 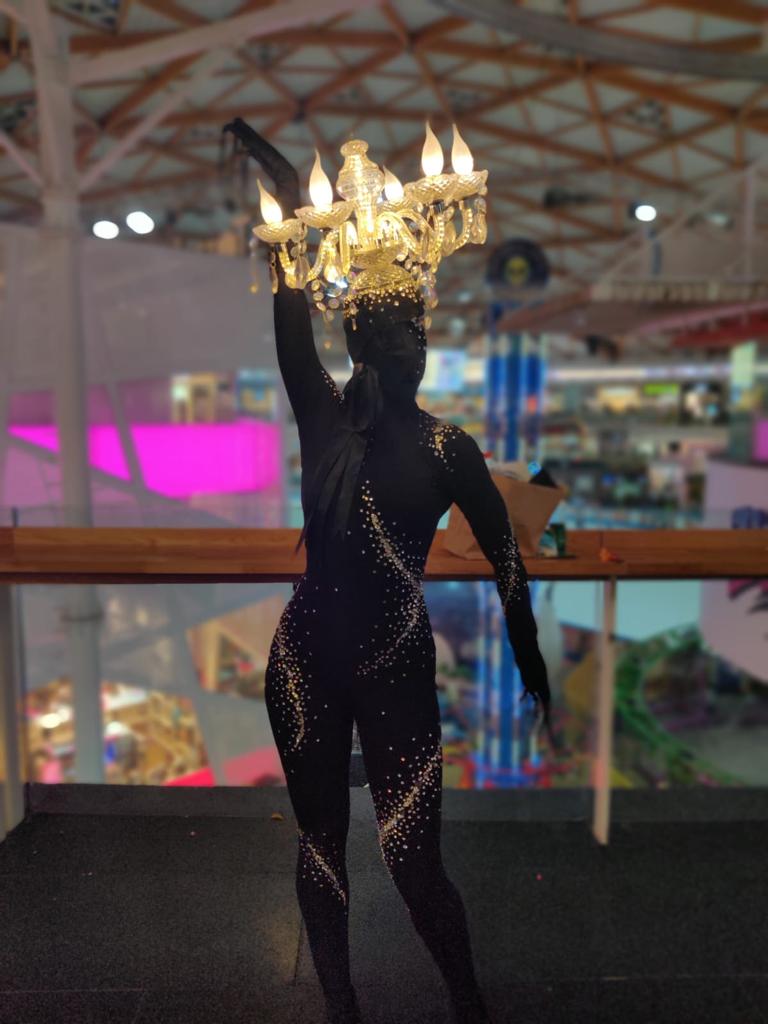 The Eilat event at the entrance plaza to the Ice Mall, at 8 Kampen St., on the North Beach celebrates Hanukkah with a giant light display, “living sculptures” and assorted performances. Credit: Courtesy.

Tzfat. Tsfat. Tsvat. Zefat. Safed. However you spell it, it is one fascinating town. And Hanukkah is an opportune time to sample some of its magic. Known for its arts scene, its breathtaking blue-purple views of the Meron Mountain Range and its mystical spiritual legacy (the Kabbalah traces much of its roots back to the 16th-century here) Tzfat boasts a labyrinth of ancient alleyways to explore.

The organization Livnot U’Lehibanot at 17 Simtat Alkabetz offers a range of Hanukkah programs for all ages, including tours of the oldest sections of the city (dating back to the 16th century), as well as archaeological digs. Look for holiday art workshops, concerts, skits and a children’s show (polish up your Hebrew for these), in addition to tours (typically offered in both English and Hebrew). The day finishes with a candle-lighting at 5:30 p.m., sufganiyot and tea, an 8 p.m. concert and a lantern tour of the ancient tunnels. (For more info or reservations, call 04-697-0311 or 052-349-8804.)

Israel’s third-largest metropolis offers its 28th annual “Holiday of Holidays.” Designed to be an ode to the religious, artistic and cultural diversity the city is known for, the festival features the cultures and traditions (and yes, the food) of the various faith communities of the region. The action, centered around the Beit Ha’Gefen, Wadi Nisnas and German Colony neighborhoods, features tours, performances, displays and concerts. (For a schedule and complete listing of events, visit: www.haifahag.com/?lang=2.)

You are cordially invited to spend today in Jerusalem where the seventh day is permeated with the air of the Sabbath in all its myriad expressions. From teens playing ball and families picnicking at Gan Soccer, the city’s central park, to traditional Shabbat—and, of course, Hanukkah— observances at synagogues and the Western Wall (the Kotel), Jerusalem shows her best face on Shabbat Hanukkah. Every evening throughout the “Festival of Lights,” the giant menorah at the wall is ceremoniously kindled by leaders and rabbis from all around Israel. The lighting can be seen just before sunset, which is around 4:30 p.m. at this time of year. But you might want to get there early to beat the crowds.

Not to be missed, after enjoying the lighting of the Western Wall, consider taking a nocturnal stroll through such traditional city neighborhoods as Nachlaot, Har Nof and Mea Shearim. Time it between 4:30 and 6 p.m., and you’ll be rewarded with the sight of streets lined with brightly lit hanukiyot—aka menorahs—“publicizing the miracle” encased in those glass boxes. 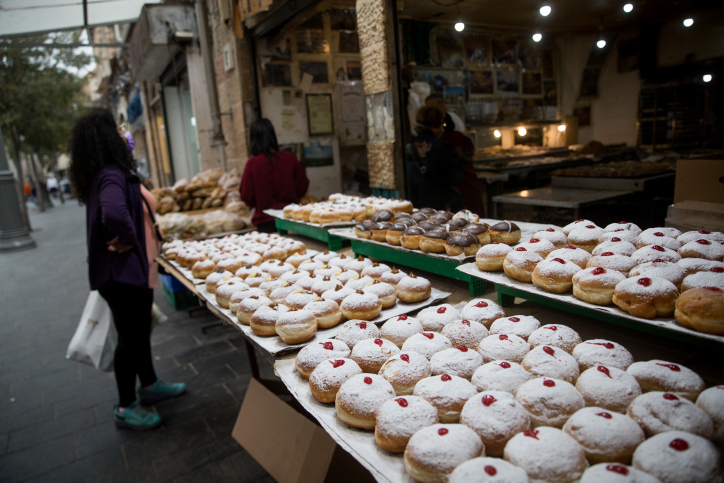 An array of doughnuts sold at the Haba bakery ahead of the Jewish holiday of Hanukkah outside the Machane Yehuda outdoor market in Jerusalem on Dec. 7, 2020. Photo by Yonatan Sindel/Flash90.

The next morning, you’ll want to get an early start to sample some of the city’s Hanukkah offerings (in addition to the sufganiyot beckoning from many a bakery). Among them:

The Israel Museum of Jerusalem attracts many visitors since the nation’s children are all off from school for the holiday—and the free admission this week also helps. Not only does Israel’s largest cultural institution boast a national repository of art, archaeology and Judaica, but this week “Distant Cultures Up Close: Hanukkah at the Israel Museum” serves up a selection of performances, including puppet shows for the kids, workshops, tours and films. The program, which is largely in Hebrew, runs daily throughout the holiday, except Friday and Shabbat. (For more information on the museum’s offerings, visit www.imj.org.il/en/events/distant-cultures-close-hanukkah-israel-museum or call 02-670-8811.)

While in the neighborhood, why not visit the Bible Lands Museum Jerusalem next door? Throughout the holiday, in partnership with the Jewish National Fund, the museum presents a Hanukkah program especially for families with kids 5 and up focusing on the birds of Israel. The day which includes art and carpentry workshops, games, interactive tours, stories and other kid-friendly activities from 10 a.m. to 4 p.m. every day of the holiday is designed for Hebrew speakers. The fees are based on each workshop, etc. and accompanying adults are admitted with only museum admission. (Visit www.blmj.org for more information.)

If you jump in the car by early afternoon Sunday and drive three-and-a-half hours from Jerusalem to Kibbutz Ketura some 30 miles north of Eilat, you should arrive at the Kibbutz Guesthouse in time to see all nine barrels of the mountaintop menorah ablaze.

A menorah on a mountain near Kibbutz Ketura. Credit: Yuval Ramos.

For the last 30 years, the kibbutz’s bar and bat mitzvah kids have been tasked with climbing the mountain and lighting the menorah—a setup involving rags and diesel fuel, and a sight you will clearly see from the guesthouse.

Note: While you’re on the kibbutz, enjoy the hiking opportunities and ask to see the Methuselah Tree, grown from an ancient type of date seeds that had lain dormant under the ground for thousands of years. (For a reservation, call the guesthouse at 08-635-6658.)