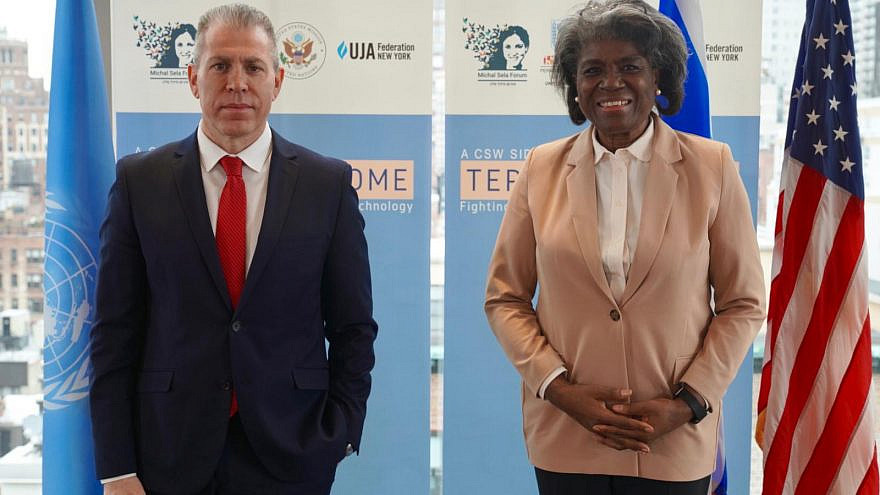 Gilad Erdan, Israel’s Ambassador to the United States and United Nations, and U.S. Ambassador to the United Nations Linda Thomas-Greenfield, together with the nonprofit organization Michal Sela Forum and the UJA-Federation of New York, called on the world to unite and adopt the latest technologies and innovations in the fight against domestic violence at a March 17 event in New York.

Including a presentation called “Terror at Home,” it was attended by dozens of ambassadors, senior U.N. officials, employees of global technology companies and representatives of the Jewish community, including a number of Israeli celebrities.

“Domestic violence is a despicable and horrifying phenomenon, and eliminating it from our homes and societies must be a priority for all of us,” said Erdan. “We need to fight this in the same way we fight against COVID-19 and terrorism. Terror at home is terror. We can no longer wait for a life to be ruined or taken before we act.

“If combating domestic violence was a priority for U.N. member states, they would modify and apply existing technologies to fight against it,” he continued. “They would also use the wiretapping capabilities applied to preventing terrorist attacks, to preventing the next case of terror in the home. We call on all countries to adopt the necessary tools to bring an end to it.”

Israeli actress Gal Gadot of “Wonder Woman” fame also spoke at the event, making an appeal for action to the world. She said it’s time “for a global forum like the United Nations to become involved in such an essential fight, a battle between life and death. We must share our knowledge and tools to prevent even one more woman from being a victim of abuse. Alone, we’re strong. But together, we’re stronger.”

President of Google.org Jacquelline Fuller announced that Google’s philanthropic arm would provide a $300,000 grant to the Michal Sela Forum, an Israeli NGO named for a 32-year-old woman murdered by her husband in November 2019 in front of their baby daughter. The funds will be used to deliver a technology empowerment program for survivors of domestic abuse.

Called “Nothing about us without us,” the program will provide participants with technological and business skills and tools to enable them to create safety solutions and improve their economic livelihoods. Activities will include innovation workshops, the second edition of the Michal Sela Safe@home hackathon and an accelerator program tailored to address the needs and the challenges of nascent projects aimed at preventing domestic violence.

Eric Goldstein, CEO of the UJA-Jewish Federation of New York, said “as we know from our work supporting domestic-violence survivors in New York and in Israel, this issue touches people of every nationality, ethnicity and economic background. We’re here to lay bare what is often hidden and to create a path forward for our people who feel they have no way out.”