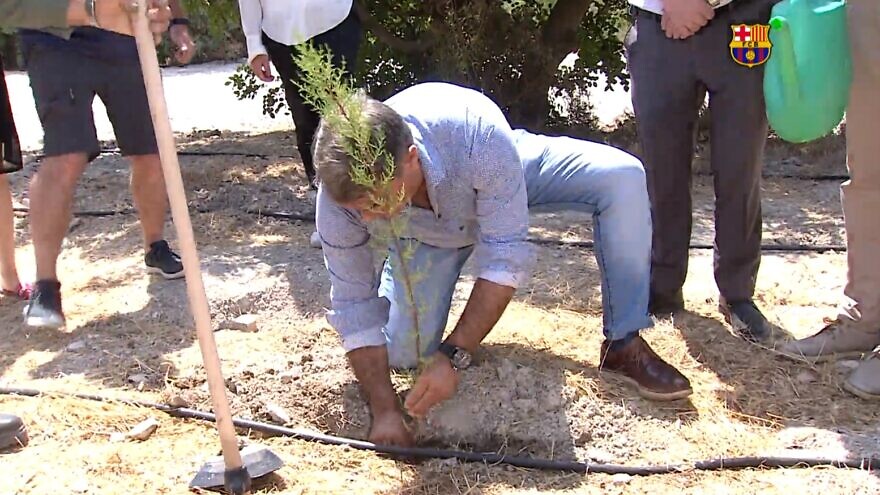 The president of FC Barcelona participated in a tree-planting ceremony in Israel ahead of the El Classico match in Tel Aviv between the soccer club’s legendary players and Real Madrid.

Joan Laporta took part in a prayer session before planting a cypress tree on one of the hills surrounding Jerusalem on Tuesday. The event was organized by Keren Kayemet LeIsrael-Jewish National Fund, which works to promote environmental protection and counter desertification by repopulating forests in Israel.

“Such a modest gesture is full of meaning because it helps a land like this to prosper and ensure a better quality of life for the people who live here. It also makes Israel sustainable for future generations,” said Laporta. “We Catalans are open to the world, and so our club is open to the world, too. We have always promoted togetherness, fraternity, equality, freedom and peace. And we are creating a fraternity with a people who work for their customs and to be enterprising.”

Laporta also attended the opening of Israel’s “Barça the Exhibition” on Monday prior to Tuesday’s match between Real Madrid and the Barça Legends, which is a “result of an FC Barcelona program to showcase the great players that have worn its famous colors over the years,” according to the soccer club’s official website. Members of the exhibition joined the July 20 tree-planting ceremony by each planting a carob tree.

At the same time, Beitar Jerusalem soccer-club owner Moshe Hogeg canceled a friendly match with Barcelona after it refused to play in Jerusalem.

After receiving the contract for signing and being exposed to the unequivocal demand that the game not take place in the capital, Jerusalem, and some other demands that I did not like, I slept with a heavy heart, thought a lot, and decided that before all, I am a proud Jewish and Israeli,” Hogeg wrote on Facebook.

“I purchased Beitar Jerusalem out of love for the holy capital; I fought a war with racism and will continue to fight it,” he said. “I promote coexistence and am in favor of peace.”