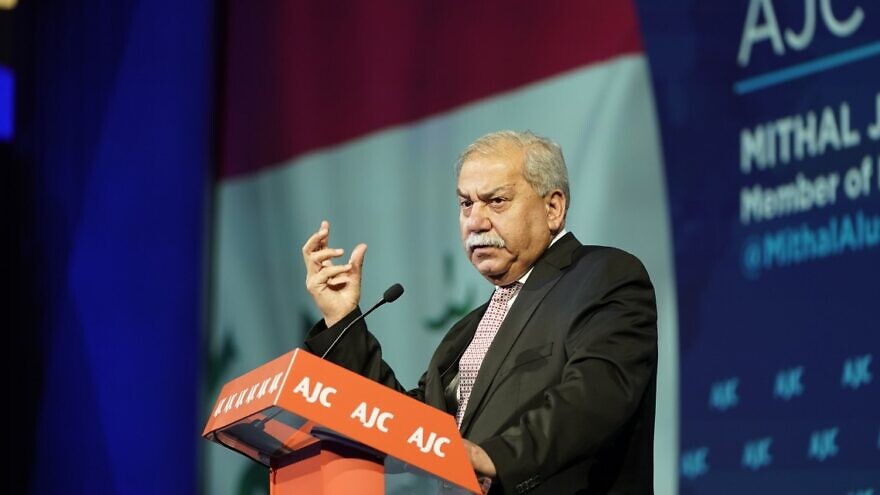 America’s retreat from maintaining a strong military presence and moral leadership in the Mideast and Asia is a strategic blunder that aggressive regimes, including Iran, will seek to use to their advantage, says one former Iraqi Parliamentarian and longtime friend of Israel.

Mithal al-Alusi, a Sunni Muslim who served in Iraq’s Parliament from 2005 to 2010, during which time he advocated normalized relations between Iraq and Israel, told JNS this week that Iran is using Iraq as a way station for transporting material for producing “missiles and drones” from Iran to the Gaza Strip. He also said that America’s precipitous withdrawal from Afghanistan has created a “strategic vacuum” he believes will be exploited by Iran, Pakistan, China and Russia.

A champion of human rights, rule of law, free markets and democratic alliance, Alusi, 68, has paid a price for his principles. Forced to flee Iraq as a young man for protesting Saddam Hussein’s human-rights abuses, he returned to Iraq with his family following the entry of U.S. troops into the country in March 2003. In September 2004, after accepting a leadership position in Iraq’s de-Ba’athification Commission, he made a public visit to Israel, speaking about the importance of cooperation between Iraq and the Jewish state. As payback for their father’s public stand, terrorists murdered Alusi’s sons Ayman, 29, and Jamal, 22.

In 2005, the American Jewish Committee (AJC) awarded Alusi its Moral Courage Award for his determination, in the words of the AJC’s president David Harris, to “insist Iraq refuse anti-Semitism and anti-Zionism.”

In 2019, Alusi received the AJC’s Jan Karski Award for his “profound personal courage in seeking to achieve his vision of a genuine breakthrough in relations between Arab nations and Israel,” according to AJC president Harriet Schleifer.

Alusi, who contends that Iran’s mullahs have bribed many Iraqi politicians and infiltrated the Iraqi government, corroborated statements by Israeli Defense Minister Benny Gantz at last week’s IDC Conference accusing Iran of training terror operatives from Yemen, Syria, Lebanon and Iraq at Kashan airbase north of Isfahan, Iran. Gantz also spoke of Iran trying to transfer “know-how that would allow the manufacturing of UAVs” or unmanned aerial vehicles, in the Gaza Strip.

Alusi echoed Gantz’s descriptions and added that not only is Iran’s Islamic Revolutionary Guard Corps training individuals from all over the Mideast at Isfahan to become terrorists, Iran is transporting material to produce missiles and drones across Iraq “with help from Iranian and Iraqi militias.” The materials, including missiles and drones themselves, are being moved from Iran, through Iraq, Syria and Lebanon into Gaza, said Alusi. He believes that the absence of significant U.S. military presence in Iraq has allowed this to take place, and that the power vacuum is being filled by Iran—a threat to both Iraqis and Israelis.

“In Iraq now, we have 14 provinces with zero American presence,” he said. “In the [Iraqi] provinces with zero American presence, Iranian [terrorist] militias are happy, and they do what they want. Israel’s army is strong, but it’s not fair to run away from the arena and leave them and [Iraqis] to fight the terrorists and bring international safety. We can’t do it alone.”

It’s incorrect, said Alusi, to believe that average Iraqis have not fought to preserve the freedom and democracy that American troops brought to the country. He pointed out that in recent years, thousands of peaceful demonstrators took to Iraq’s streets to protest government corruption, in addition to Iran’s meddling in the country. He claimed that over the time span of approximately one year from October 2019 to October 2020, 800 unarmed, pro-democracy Iraqi demonstrators were killed, and more than 7,000 were “disappeared” by “Iranian militias” within Iraq.

The U.S’s precipitous troop withdrawal from Afghanistan was a strategic blunder that will likely have far reaching negative repercussions, argues Alusi.

Referencing the current policy discussion regarding the fate of Afghan assets worth $10 billion in overseas accounts, he said any release of assets to the Taliban would gravely compound the mistake.

“The Taliban is an extremist organization that doesn’t reflect the average Afghan citizen,” said Alusi. “Any pushing money to them will never develop something positive in Afghan society.”

From Iraq, to Afghanistan, to Saudi Arabia, the United States appears to be in retreat, and this will embolden terrorists and extremist regimes, Alusi believes. He cited the Biden administration’s removal of an advanced missile-defense system from Saudi Arabia in recent weeks as a mistake.

He would like to see the United States resume a stronger role in world leadership. It should start with refusal to appease terrorists and solid support for moderates.