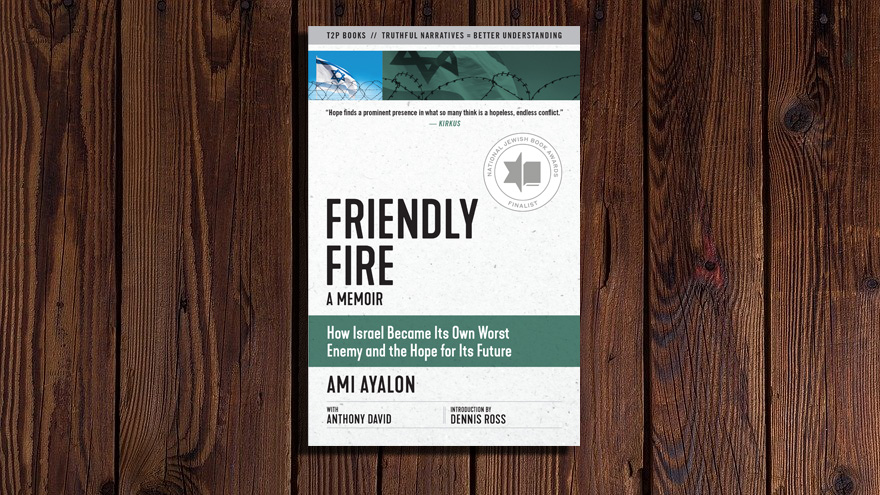 It’s a well-worn political observation that “it took a Nixon to go to China,” meaning because President Richard M. Nixon was identified as a staunch conservative, he was trusted to go to mainland China and open a dialogue with that nation’s communist rulers, a dialogue that led to the establishment of diplomatic relations between the two adversary countries.

Ami Ayalon had earned his reputation as a fierce defender of Israel. He had been a commander of the seagoing commando unit known as Flotilla 13 — equivalent to the U.S. Navy seals — and later became overall commander of Israel’s Navy, and later still head of the Shin Bet, also known as the Shabak, which in Israel serves as a cross between the FBI and the CIA.

Over the years of fighting Palestinians, he began to see them not so much as enemies, but as a people oppressed by blind, self-destructive Israeli policy.  A glimmer of this came when he had a conversation with Israeli novelist Meir Shalev,  After Israel’s victory in the 1967 Six Day War, Shalev said he came across an elderly Arab man pushing a cart filled with buckets of ice and Fanta sodas.  An Israel reserve officer yelled at him, “What are you doing here?” but not speaking Hebrew, the man just stared back at the officer.  The Israeli kicked the old man’s  cart over.  Observed Shalev: “That was what power could do to us.  Turn us all into that officer kicking a man’s cart over, just because he can.”

Another moment came in 1988 when Ayalon was serving as deputy commander of the Israeli Navy.  Visiting the Sha’ati refugee camp in Gaza to meet with local fishermen, his jeep was surrounded by a hostile group of women, some old men, and kids on bicycles.  Debris rained down on him from nearby buildings.  After getting away, what impressed him the most about the incident was “a boy no older than fifteen glaring at me with hatred  His look, which felt like a declaration of war … Twenty years after Meir Shalev had his Fanta man moment in the West Bank, I saw myself through the eyes of this kid.  On the kibbutz I was raised to hate the oppressor and to value human dignity and freedom above all else, and according to those values I had to agree with the boy in the camp: I as the hateful occupier and oppressor of millions of Palestinians who aspired to political independence.”

Neither of those incidents caused Ayalon to stop striking out at the Palestinian enemy whenever Israel’s security was threatened, but they got him thinking.  Perhaps Israel’s iron fist policy of retaliation against Palestinians — a policy that not only caused death and injury to Palestinian terrorists but to civilian bystanders as well — was self defeating.  Perhaps, thought Ayalon, instead of trying to subjugate the Palestinian adversaries, a better idea would be to find ways to work together with them to realize a mutual goal of two states living in peace, side by side.  The moral of the stories seemed to be that the harder Israelis tried to bend Palestinians to their will, the more determined Palestinians became to resist.  Israelis might win battles, but Palestinian militants have been winning the war, he suggested.

Ayalon subsequently became an enthusiastic supporter of the Oslo Peace Process, seeking out Palestinians who could help him as the head of the Shin Bet better understand the perspective on the other side of the line.  He befriended Sari Nusseibeh, who headed Al Quds University in Eastern Jerusalem and served as the Palestine Authority’s representative in that city.  He saw opportunity after opportunity for peacemaking dissipate as top-level Israeli politicians put their political fortunes ahead of their country’s quest for peace.  He grew increasingly disillusioned.

Part of the problem, he decided, was that Israelis were trapped by their own narrative of how the state came to be.  As Israelis long told it, and as he had absorbed growing up on a kibbutz, Arabs had been told in 1948 by the leaders of the invading Arab armies to evacuate their villages to facilitate those armies driving the Zionists into the sea.  However, he said, such was not universally the case — For example, Nusseibeh’s family was driven from their village by the Haganah, which later became the Israel Defense Force.  For them, the Nakba (Catastrophe) was a real-life event, not simply Arab propaganda.  Another myth in Ayalon’s view was the oft-repeated phrase that Israel had “no real partner for peace.” He argued that PLO Chairman Yasser Arafat really had been such a partner, but time after time, Israel failed to live up to its Oslo commitments, forcing Arafat to countenance counter-measures for his own political survival.

As Ayalon grew more sensitized to the Palestinian point of view, he and Nusseibeh co-developed a set of six principles which they believed could end the Arab-Israeli conflict  and create a lasting peace:

–Two states for two nations based on the 1967 borders with selective acre-to-acre land swaps to benefit both peoples
–Palestinian refugees would mainly return to the demilitarized state of Palestine, while Israeli settlements in agreed-upon Palestinian territory would be evacuated.
–Israel would acknowledge the suffering of the Palestinian people and contribute to an international fund to compensate them for their losses.
–Both sides would unambiguously renounce all other claims.
–Jerusalem would be an open capital of both states, with Arab neighborhoods under Palestinian control, and Jewish neighborhoods under Israeli control.
–Palestine would be the guardian of the Temple Mount; Israel would be the guardian of the Western Wall.

While the plan developed some traction, particularly with American diplomats, it was upstaged by Prime Minister Ariel Sharon’s decision to unilaterally withdraw from Gaza, without any preparation or negotiation  — a decision that Hamas was quick to claim came in response to its campaign of militancy (and terror) against Israel.  In Ayalon’s view, Sharon’s decision was a political chess move — to sacrifice the pawn of Gaza to save the queen of the West Bank (Samaria and Judea.)  The quick transformation of Gaza into a hostile state by Hamas made the concept of further withdrawals from the West Bank a non-starter.

For a while, Ayalon served in the Knesset and even as a special representative for Ehud Olmert, who had succeeded to the prime minister’s position after Sharon was felled by a stroke.  But Olmert later lost credibility when charges of corruption during his preceding term as Mayor of Jerusalem set a process into motion that would land Olmert in prison.  The Ayalon-Nusseibeh plan was sidetracked in the fallout of Sharon’s and Olmert’s missteps.

Nevertheless, Ayalon and Nusseibeh remained hopeful that the violence can end and two peoples can live side by side, but to do so, according to Ayalon, there must be a reimagining of the past and a recognition that both peoples–Arabs and Jews–have legitimate claims to internationally recognized nationhood.

The value of this book, in my opinion, is that Ayalon has the credentials of an Israeli patriot.  He cannot be dismissed as a dupe of the Palestinians, or as a hopeless liberal with his head in the “kumbaya” clouds.  His observations about Israeli society and policy, though they may hurt Jewish pride at times, need to be considered.  They may help to prompt Israelis and supporters to reexamine Israel’s history and policies, and in the process to give Palestinians reason to hope again for a dignified future.  At the very least, it should influence Jewish readers in the Diaspora to have a more nuanced view of the Israeli-Palestinian conflict.