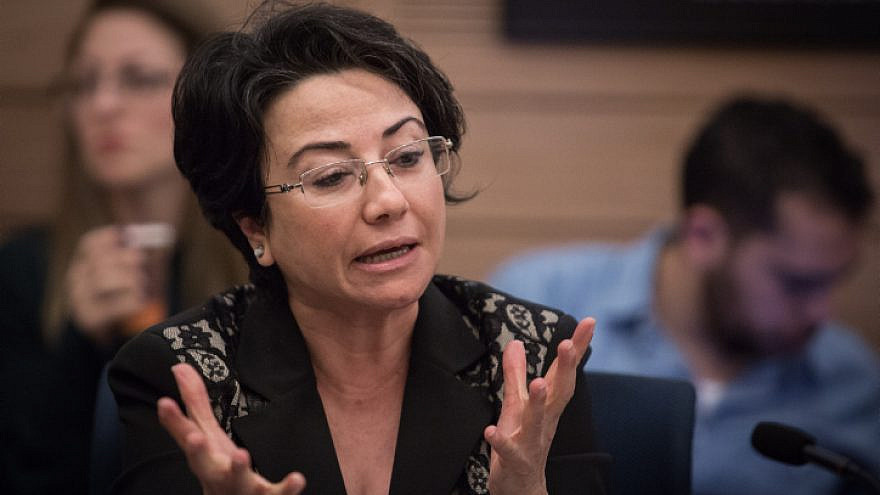 Israel’s attorney general announced on Tuesday that former Knesset member Hanin Zoabi of the Balad Party will be indicted on fraud charges.

Zoabi is accused of forging documents submitted to the State Comptroller between 2013 and 2016, and is suspected of systematically deceiving the ombudsman by misrepresenting the source of millions of shekels the party had received.

The announcement comes after the questioning of Zoabi and 35 other suspects, including former senior Balad officials, regarding alleged financial irregularities in the party.

“After considering the substance of the claims at the hearing and the legal opinion presented to me, I reached the general conclusion that there is an evidentiary basis and it is in the public interest to put Ms. Zoabi on trial,” said Mandelblit in a statement.

Though there were legal grounds to file criminal charges against a political party, he said, doing so “is expected to not only harm its current leadership or founders or owners, but also a wider circle of citizens who have an attachment to the party and identify with its goals and public positions.”

“Our position with regard to the Balad Party was heard within the framework of two hearings and was accepted in full by the attorney general. The decision not to file a precedential indictment against a party is an important milestone and prevents a historic legal distortion,” the lawyers said in a statement.

‏‎As for Zoabi, the attorneys said they were holding hearings and negotiations with prosecutors.

Zoabi’s openly hostile stance against the State of Israel had angered many over the years. She has sparked outrage in the past with comments in support of Hamas, labeling Israeli soldiers “murderers” and other similar rhetoric.

She participated in the 2010 naval convoy that attempted to break Israel’s security blockade on the Hamas-run Gaza Strip. Ten activists were killed aboard the Mavi Marmara ship when they attacked Israeli naval commandos who boarded the vessel.

In April 2018, Zoabi called for the State of Israel to be dissolved and replaced with either two states—one secular and one Palestinian, or one binational secular state.

Balad, which advocates for a binational state for Palestinians and Israelis, has been dogged by controversy. Party founder Azmi Bishara fled Israel in 2007 after being accused of passing secrets to the Hezbollah terror group.