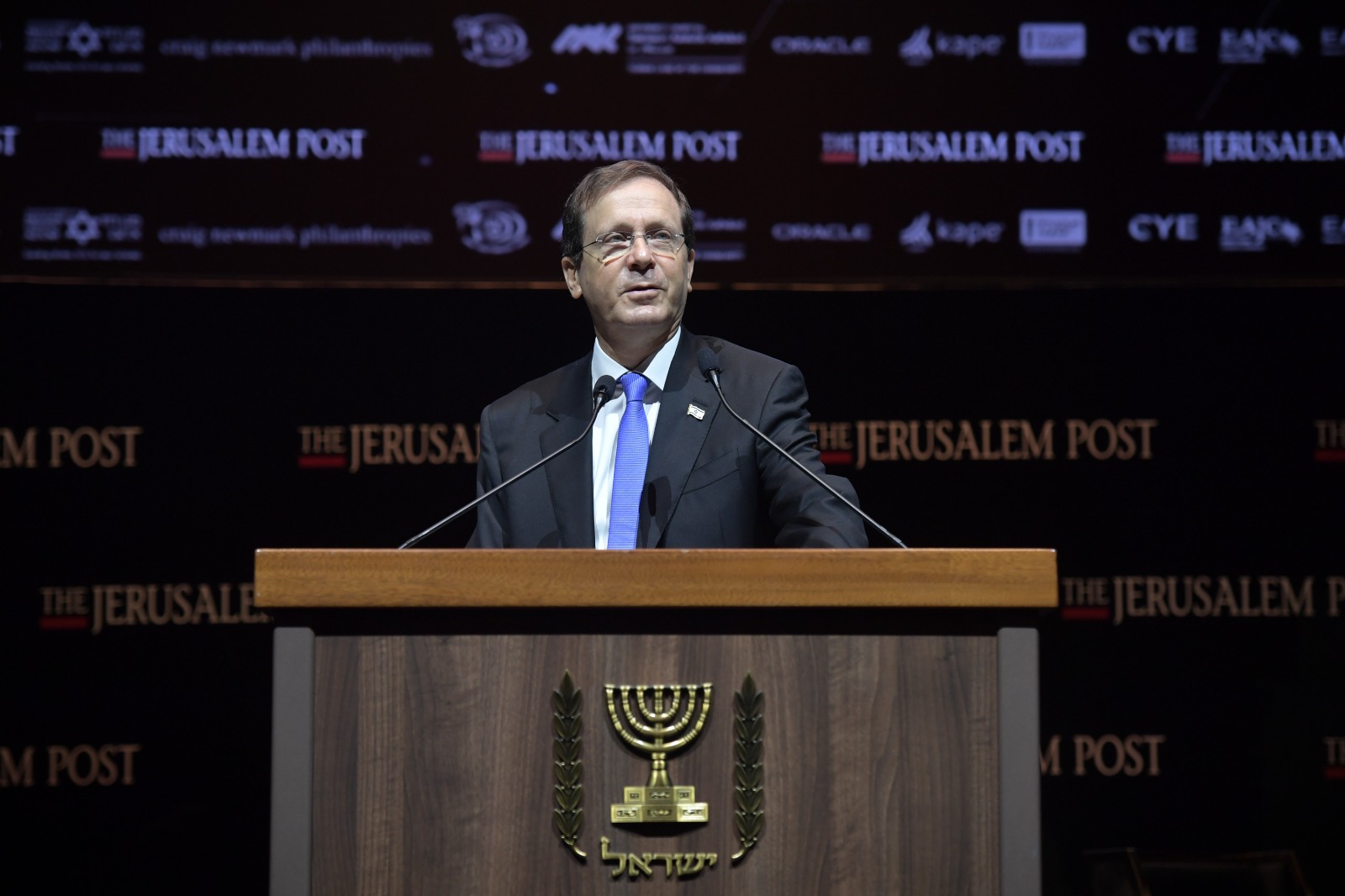 President Herzog spoke of the importance of international dialogue and said: “Over the past year we have seen the good this dialogue can bring. And I want to focus on the Abraham Accords. They are a remarkable breakthrough in the history of our region. A brave, noble choice by Arab nations, with the fine mediation of the United States, to cast aside a failed policy of exclusion, lack of dialogue, lack of tolerance, and instead embrace a future based on inclusion with an Israel that has always outstretched its hand in peace. I hope many more Middle Eastern nations will emulate this path of dialogue and tolerance

“I recently visited the king of Jordan in Amman and met King Abdullah II. I have spoken at length with President al-Sisi of Egypt. I had a long call with President Erdogan of Turkey, and a few conversations of courteous nature with Chairman Abbas of the Palestinian Authority”

President Herzog condemned Iran’s regional aggression as a result of a breakdown of international dialogue and said: “Here, we see the world’s failure to act in concert, to settle on a strategy to sever Iran’s tentacles in the Middle East, to restrain its ballistic missile program, and to shut down its nuclear program. Iran is exploiting this inaction, this lack of coordination: a clear threat to international peace and security”

President Herzog also addressed the climate crisis and called for meaningful action at the COP26 climate summit: “As President, I intend to push forcefully on this issue, of the climate emergency. In November, world leaders will gather in Glasgow, Scotland, for the climate summit in a bid to pull our planet back from the brink. I hope that there too, dialogue, concern for our children’s future, and concern for the world that we are blessed to live in together will prevail over short-term interests and impulses”

“I expect global powers to hold [Iran] accountable, to bring them to the UN Security Council. That would be the peaceful route”

“We won’t need to increase taxes to reduce the national deficit or finance its infrastructure projects,” Liberman told Jerusalem Post Editor in Chief Yaakov Katz in Hebrew at the conference

Head of Public Health Services Dr. Sharon Alroy-Preis revealed at the 10th annual Jerusalem Post Diplomatic Conference on Tuesday how the procedure to travel to the country will work.

Former US Treasury secretary Steven Mnuchin said at the 10th annual Jerusalem Post Diplomatic Conference on Tuesday he predicted an economic boom in the next 18 months.

Former Mossad chief Yossi Cohen: Iran not close to getting a nuclear bomb

If Iran develops a nuclear weapon, lsrael must be able to stop Iran on its own

Albert Bourla  said today : “Pfizer is committed to staying one step ahead of the virus

Defense Minister Benny Gantz at The Jerusalem Post conference: “We are developing both defensive and offensive capabilities against our enemies, constantly stopping attempts to harm Israeli citizens.

We must always remain two steps ahead, combining civilian and military capabilities to maintain Israel’s cyber superiority and to stop terrorism. It is a vital need for Israel’s security and a common interest with our closest partners, so we are constantly engaged in learning, knowledge sharing and technological development.”

Minister Gantz also referred to the Iranian threat: “Israel is one of the only countries in the world that is still under constant existential threat– with Iran at the top of our agenda. We have developed technological and operational tools that will guarantee our security against Iran’s nuclear ambitions.”

Minister Gantz also called on the international community to take action against Iran:

“I call on the international community to take a stand. I am saying it because Iran is first a global challenge, then a regional one and only finally, it is a threat to Israel. The future is now, and a future with a nuclear Iran is a dark one.”