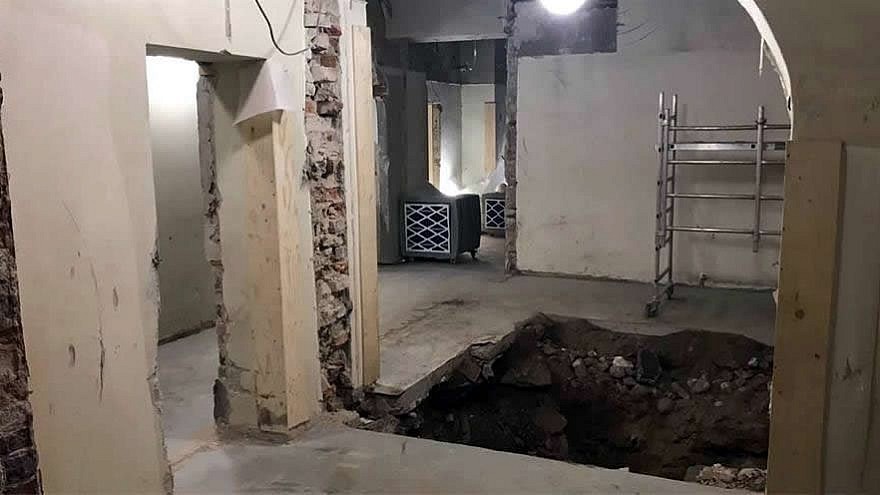 A markedly historic site neighboring Helsinki’s Presidential Palace of world summit fame being refurbished for a Chabad center just got even more historic with the discovery below its surface of what archaeologists believe are the remains of a 300-year-old wooden Russian fortress from the time of Peter the Great.

Situated currently on the site is Helsinki’s defunct Customs and Packaging House, built in 1765 and holding the distinction of being the second-oldest stone structure in the Finnish capital. It was purchased by Lubavitch of Finland from the city in 2015, aided by a grant from the late Sami Rohr and his son, George Rohr, and used partially since for Chabad activities. It was undergoing renovations when an excavation shovel late September struck what are believed to be wooden beams of the Russian fortress, according to state archaeologists.

The couple runs a myriad of programs alongside a previously established Jewish community that goes back generations, including the era of the Jewish Cantonists, who had been conscripted by the Russian Imperial Army as young Jewish boys. The planned center will house Torah classes, a women’s circle, a Hebrew and Sunday school, Shabbat and holiday services, a large social hall and the existing Ganon Chaya Day Care Center. A Gan Israel summer camp and programs for local teens, global tourists and businesspeople, including Israelis, round out their slate.“There is a lot in and under this building, and as we renovate, the city and state are doing archaeological research that reveals more history than we realized,” said Rabbi Benyamin Wolff, who has co-directed Chabad activities in Helsinki for the past 15 years with his wife, Fruma Ita. “After its renovation, we hope for an even greater future through the continuation and increasing of our activities.”

“We were using only part of the building,” said Wolff. “Now, after the renovation, it will be fully functional.”

He noted that the archaeological findings will not change the use of his property, except to temporarily slow down the renovation progress.

The early 18th-century Russian fort of interest spanned a much larger area than the planned center and old customs house site, which are located on Helsinki’s main square, shared by the Presidential Palace that is the destination for high-level world summits, including the most recent Trump-Putin meeting in July. Historical records show that the fort was constructed during the Great Northern War when a conquering fleet of some 17,000 Russian soldiers, sent by Czar Peter the Great, landed in May 1713 on what were then Swedish Empire shores.

After the evacuation of its citizenry, Helsinki (Helsingfors in Swedish) remained in the hands of the Russians until the Treaty of Nystad in September 1721. The former residents returned to the area to discover some 200 Russian-built wooden buildings and a field plot, believed to be part of a network of occupation structures.

In addition to the remnants of the suspected fortress structure, what has now become an official state archaeological site has also unearthed pottery, animal bones, glass pieces, jig tools and cannon balls, according to local news reports.

Other than the knowledge that the fortress was dismantled shortly after the post-treaty return of Helsinki’s citizens, little else is known about it—a state of affairs that state archaeologists say is about to change.

“It is very exciting,” John Lagerstedt, a researcher at the Finnish National Board of Archaeological Field Services, told Helsinki’s YLE news service. “According to historical maps, there was never a fortress built by the Russians.”

The archaeological work will continue into 2019, he said, including annual tree-ring timing studies to verify the age of the wooden beams.

“This will help to determine for sure what structure is under the ground,” stated Lagerstedt. “Now we are only in field work, so nothing final can be said.”