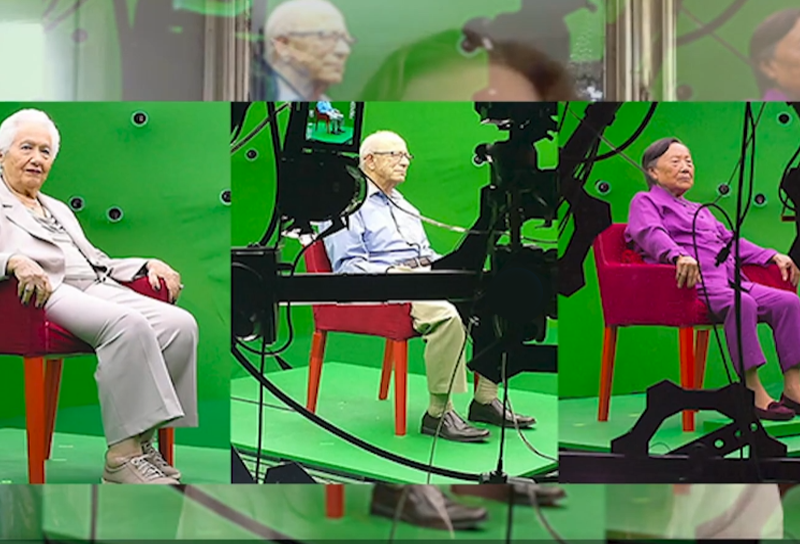 A pair of ‘We Are the Tree of Life’ programs, May 27, with Ali Viterbi interviewing Francesco Lotoro, and June 1, with Nuvi Mehta and Kate Hatmaker introducing nine Holocaust composers, were both impressive and informative.

Viterbi posed excellent questions to Lotoro, the Italian pianist, conductor and musicologist, who is devoting his life to the collection and performance of Holocaust music. There were interesting musical examples that Lotoro shared, particularly his most recent discoveries about the Polish composer, Jozef Kropinski, who, at Auschwitz, hid in the pathology lab to compose music by candle light during the night.

Lotoro is now raising money to erect a complex of buildings called The Citadel, in Barletta, Italy, to house and perform the Holocaust music he has collected, and to accommodate conferences and seminars about this music.

Mehta and Hatmaker shared the June 1 program by taking turns introducing the nine composers and their works. The first was the Hungarian-Jewish composer, Sandor Kuti (1908-1945), annihilated in a German concentration camp. An excerpt from his Solo Sonata for Violin was beautifully performed on video by the Hungarian violinist, Orsolya Korcsolan. Kuti was a student of Dohnanyi in the Budapest Conservatory.

Laszlo Weiner (1916-1944), another Hungarian-Jewish composer, was a student of Kodaly. The Allegro vivace from his Duo for Violin and Viola illustrated his remarkable talent. His life was snuffed out in a German Labor Camp.

Zikmund Schul (1916-1944) was a student of the great German composer, Paul Hindemith. Schul’s music was influenced by Jewish liturgical music. He died of tuberculosis while incarcerated in Terezin. His Chassidic Dances for violin and cello illustrated his engaging style.

Victor Ullman, (1898-1944) was the best known of the composers imprisoned in Terezin. Viennese, a student of Schoenberg, Ullman was a prolific composer as well as a concert organizer. He also reviewed much of the music performed in Terezin. His parents, born Jewish, had converted to Catholicism. Nevertheless, Ullman suffered the same fate as the other Jewish inmates, death in Auschwitz. A movement from his String Quartet exemplified his exciting, contemporary style.

Jozef Kropinski (1913-1970), a Polish-Catholic composer, survived the war, although he never composed again after his incarceration. A light-hearted piano piece illustrated his versatility. He composed every night in his gruesome hide-away in Auschwitz.

Olivier Messiaen (1908-1992), the great French-Catholic composer, wrote his famous Quartet for the End of Time while incarcerated in the concentration camp, Staliz 8A, in Gorlitz, Poland. He managed to befriend a German guard who supplied him with paper and pencil so that he was able to compose. The presence of a violinist, a cellist and a clarinetist among the inmates allowed him to actually perform his quartet, scored for those instruments and himself on piano. An excerpt for cello and piano was played.

Hans Krasa (1899-1944), was a Czech-Jewish composer, a student of Zimlinsky, whose children’s opera, Brundibar, was performed frequently in Terezin. Excerpts are even included in the German propaganda film to showcase Terezin. A video of Krasa’s Passacaglia and Fugue for String Trio sampled his fine talent. Krasa was exterminated in Auschwitz.

Erwin Schulhoff (1894-1942), although born in Prague, was a Jewish composer of German background. His studies included the Prague Conservatory, and conservatories in Vienna and Leipzig. His influences were multiple, including jazz. He served in World War I and became a committed communist. He was about to escape to Russia when he was arrested by the Nazi occupiers and sent to a camp in Wuelzburg, Bavaria, where he perished of tuberculosis. The movement, Zingaresca, from his duo for violin and cello, was given a rousing rendition by Kate Hatmaker on violin and her husband, Alex Greenbaum, on cello.

The final composer was the Czech-Jewish poet and author of children’s books, Ilse Weber (1903-1944), another Terezin inmate. She set many of her poems to music, singing to the children in the camp hospital.

Before being interned, she and her husband managed to send their older son to safety in Sweden, but when her husband was sent to Auschwitz, she chose to accompany him with their younger son, Tommy. Her husband and older son survived the war but Ilse and Tommy were immediately sent to the gas chamber for annihilation. Her haunting lullaby, Wiegele, Wiegele (Cradle, Cradle), was first heard sung, then followed by an instrumental arrangement recorded by musicians of Hatmaker’s Art of Elan. The recording accompanied dancer Tammuz Dubnov’s choreographed interpretation of this plaintive melody on a rooftop in Tel Aviv. It served as a fitting conclusion to this program, featuring nine composers, seven of whom lost their lives in concentration camps, part of the Nazi genocide perpetrated against the six million Jews who perished in the Holocaust.

Mehta concluded with comments about the need to bevigilant because “whenever the arts are suppre ssed, we all are suppressed.” Jackie Gmach reported the recent association which We Are the Tree of Life helped facilitate between Francesco Lotoro and the USC’s Shoah Foundation.