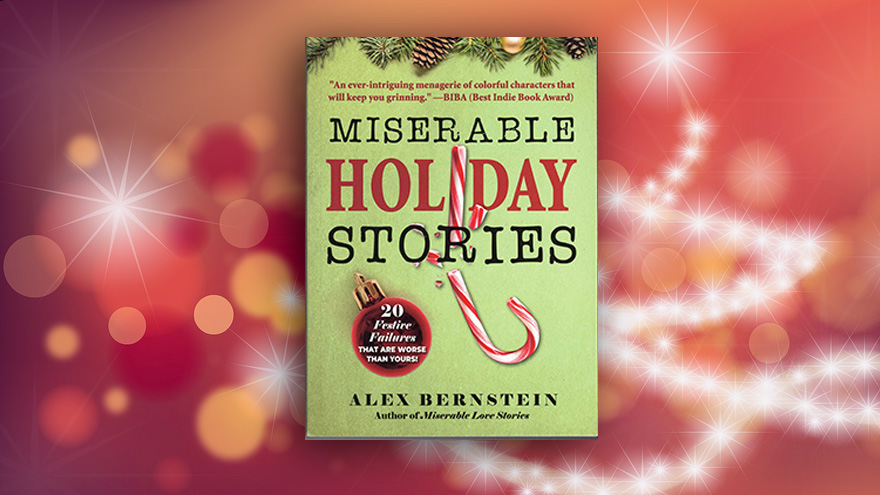 This is a collection of 20 short stories about the upcoming December holidays.  Three of the stories have distinctly Jewish angles, whereas others either are Christmas oriented or so general they might be told at any time of the year.   Some may well be stories left over from Bernstein’s last book, Miserable Love Stories.

The three stories with Jewish angles are “Blue Christmas;” “Young, Confused Parents;” and “Bits and Pieces.”

“Blue Christmas” was one of the songs crooned by Elvis Presley. In behalf of a Jewish Federation,  the narrator hires an Elvis-impersonator to entertain at the end-of-the-year show, warning him he is to refrain from singing Christmas songs and to instead concentrate on Presley’s secular songs such as “Jailhouse Rock;” “Don’t Be Cruel;” “Return to Sender;” “Teddy Bear;” “All Shook Up;” “Cant Help Falling in Love;” “Love Me Tender” and “Are You Lonesome Tonight?”

The Elvis impersonator goes by the stage name of Cassidy, but his real name is Chakin.  Jewish to the core, he has a surprise for the Federation.

In the story “Young, Confused Parents,” David who is Jewish, and his wife Ellen, who is Christian, decide upon an unusual method for determining whether to raise their son Kevin as a Christian or a Jew.

They put him on the floor and call his name.  Whichever one of his parents he crawls to will get to raise Kevin in his or her religion.

Of course, in this humorous tale, things don’t turn out as you might expect.

Finally, in “Bits and Pieces,” author Bernstein gets to off-load some parting comments, jokes and shtick.

I’ll quote just one paragraph to give you the flavor.

“What bothers me most about Hanukkah though is — in corporate America — they bring out this enormous spectacular Christmas tree covered with fantastic ornaments and baubles — and they bring it out before Halloween.  But then for Hanukkah–they bring out this tiny, crappy, electric menorah.  It’s not even a cool, modern one.  it’s a broken one from the 1970s with bulbs that used to be night lights.  So, Hanukkah has gone from the Festival of Lights to the Twisting of the Bulbs.  Hey kids-who wants to twist a bulb?  Twist the shamash first, honey!  Start on the left!”