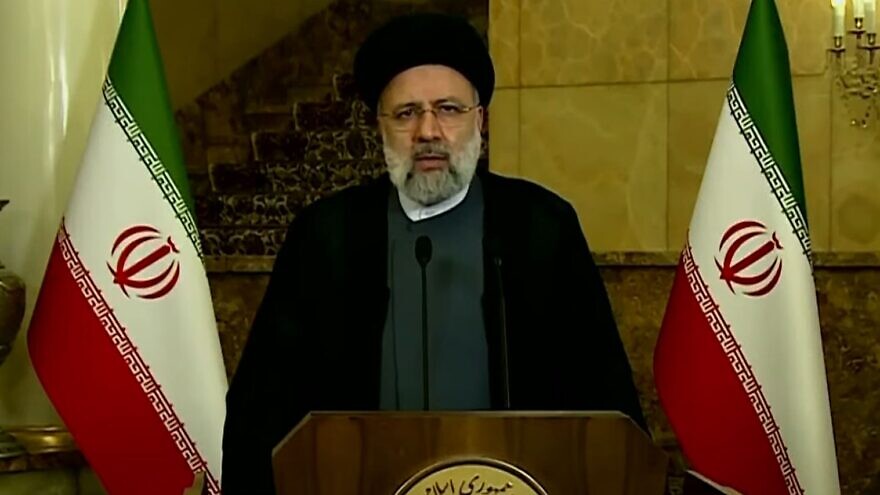 Iranian President Ebrahim Raisi, addressing the 76th session of the United Nations General Assembly by video on Tuesday, called for an end to ongoing American sanctions, describing them as the United States’ “new way of war with the nations of the world.”

“Sanctions, especially sanctions on medicine at the time of the COVID-19 pandemic, are crimes against humanity,” said Raisi, asserting that Iran is the “medical hub of the region” whose nuclear program is geared for peaceful purposes such as radiopharmaceuticals.

He claimed that Iran considers “the production and stockpiling of atomic weapons as forbidden” and nuclear weapons “have no place in our defense doctrine and deterrence policy.”

Referring to the “maximum pressure” policy of the Trump administration, which re-imposed sanctions on Iran after unilaterally withdrawing from the Joint Comprehensive Plan of Action nuclear deal in 2018, Raisi said it had “totally failed.”

The Biden administration has said it wants to return to the deal, engaging in indirect negotiations with Iran in Vienna. U.S. President Joe Biden, addressing the U.N. General Assembly on Tuesday, said that while the United States is determined to prevent Iran from obtaining nuclear weapons, “we’re prepared to return to full compliance with [the deal] if Iran does the same.”

Iran has been “the centerpiece of a lot of back-room diplomacy” at the General Assembly meeting, The New York Times reported.

The sixth round of negotiations in Vienna over a possible return to the JCPOA wrapped up in June, and no date has yet been set for a seventh round of talks. Iran held presidential elections on June 18, and has argued that it needs more time to settle in the new government before returning to the nuclear talks.

U.S. Special Representative to Iran Robert Malley told Bloomberg on Sept. 3 that while the United States was prepared to be patient regarding the negotiations, it “can’t wait forever.”

Iranian officials indicated in New York on Tuesday that the talks “are likely to resume in coming weeks, according to the Times.

“The occupier Zionist regime is the organizer of the biggest state terrorism, whose agenda is to slaughter women and children in Gaza and the West Bank,” he said. He called for a referendum involving “all Palestinians of all religions and ethnicities including Muslims, Christians and Jews” to determine the fate of the Jewish state.