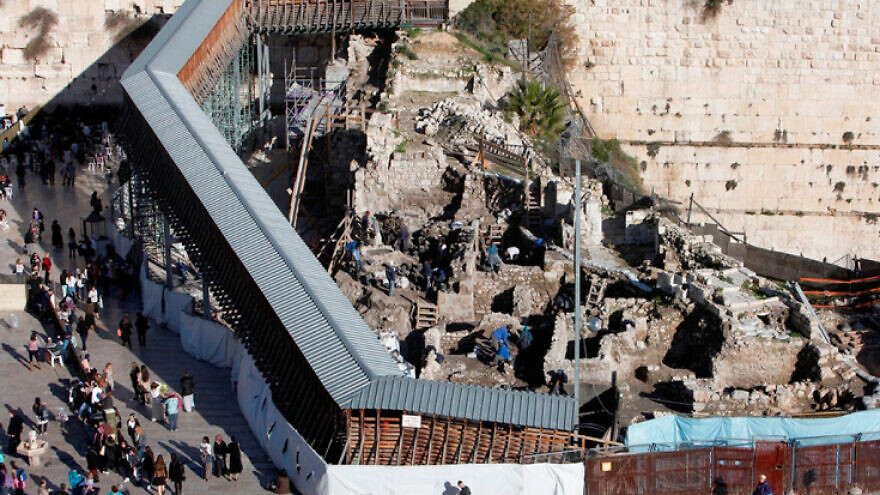 It’s a beautiful morning in Jerusalem’s Old City. Thirty foreign tourists wait on the Mughrabi Bridge to enter the Temple Mount. Eighteen worshippers, who have come to the Western Wall to pray, stand underneath the bridge. Suddenly, the bridge collapses. Eleven tourists and 13 worshippers are killed. Many others suffer severe injuries and the rest are only lightly hurt.

This scenario is not far-fetched and can happen at any moment, according to an engineer who recently surveyed the bridge.

The engineer, who works for the Western Wall Heritage Foundation, submitted his urgent recommendation in May that although the bridge—providing sole access for police, Israeli citizens and tourists visiting the Temple Mount—should be replaced by September, it really should be immediately torn down due to the danger of imminent collapse. The wooden part of the bridge, which sits on a steel base, is rotting and dilapidated, and poses an immediate threat to those using it and to those underneath it. The bridge’s collapse would likely result in catastrophic injury and death.

Israeli authorities appear to be deflecting the issue, and officials are refusing to take responsibility. People want to know why.

But Nisani believes this is nonsense.

“Even if I accept the argument—and I don’t—that we need to be careful about the sensitive issues over the Temple Mount, what is the problem with fixing the bridge?” he asked in a conversation with JNS. “The bridge is not inside the Temple Mount.”

He blamed authorities for ignoring the issue out of fear and kowtowing to Jordan’s King Abdullah and the Jordanian-backed Waqf who object to any Israeli sovereignty in eastern Jerusalem.

“Nobody wants to take responsibility,” he said.

Part of the reason for this could be that too many official bodies are involved. 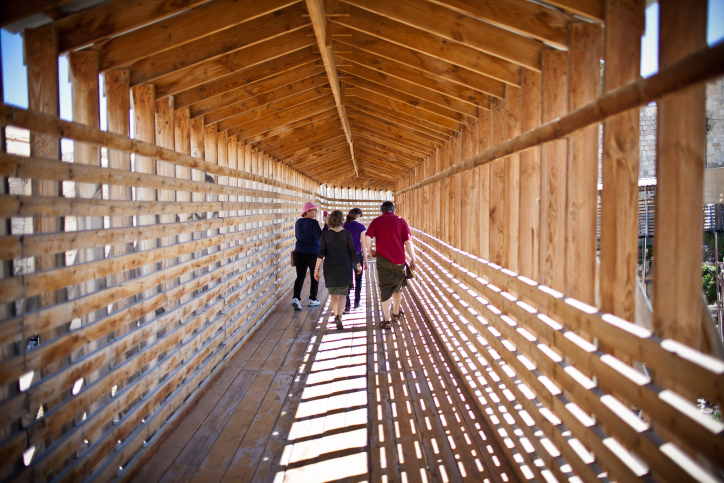 A wooden footbridge leads up from the Western Wall to the Temple Mount in the Old City of Jerusalem, April 17, 2012. Photo by Noam Moskowitz/Flash90.

Some of these include the Prime Minister’s Office, the National Security Agency, the Jerusalem Municipality, the Western Wall Heritage Foundation, the East Jerusalem Land Development Authority, the Israel Land Authority, the State Legal Advisor and the State Comptroller.

Israelis are still reeling from the tragic event at Mount Meron in April during Lag B’Omer when 45 people died in a crowd surge during holiday festivities there. A panel of inquiry has been established, and the public is demanding accountability.

Now, the public has been left wondering why none of the authorities seem to care about what could become another catastrophic political, legal and diplomatic disaster, not to mention the horrendous loss of life that would occur as a result.

Former Jerusalem City Council member Mina Fenton told JNS, “Our job is to try and ensure we don’t need to create a committee after the disaster to investigate why it happened.”

Fenton said she called the police and requested that they place barriers under the bridge to prevent women from gathering under it and to prevent a disaster.

“Of course, nothing was done,” she lamented.

Fenton said she has called upon State Comptroller Matanyahu Englman to “investigate the matter, look at all the bodies involved and examine every detail in order to hasten pulling down the bridge and building a new one.”

“We need to make the public aware so that they can amplify the issue,” she said. “This is political terror.”

She asked: “Are we taking into consideration all the arguments about Jordan and the Palestinians, but not safeguarding our own people?”

“We are sovereign in Jerusalem,” she said. “The first prerogative is to defend the people.”

Placing politics before the welfare of citizens?

The bridge was built in 2007 as a temporary solution to allow access to the Temple Mount for police and security forces after the previous ramp collapsed in 2004. In 2011, the Jerusalem Municipality approved the construction of a permanent bridge, but the Waqf accused Israel of trying to destroy the Dome of the Rock. Fearing a diplomatic backlash and Palestinian violence, Israel retreated.

In 2014, Israel began work on an additional bridge nearby, but Jordan objected. Thus, the temporary solution became permanent, and as the condition of the bridge deteriorated, it also became a real danger.

A group of worshippers who regularly visit the Western Wall—furious at the state’s indifference to what they believe is a looming tragedy—have petitioned the High Court to force the state to take action. The state has until July 22 to respond.

The petitioners charge that Israel is paralyzed by “political terror” on the part of Jordan and the Palestinians, and that the government is placing politics before the welfare of its own citizens.

Some of the authorities contacted by JNS, including the engineer who submitted the report, deferred to the Prime Minister’s Office, which, in turn, declined to comment.

Deputy Mayor of Jerusalem Fleur Hassan-Nahum expressed her disbelief over the government’s impotence in dealing with the issue.

“I understand the geopolitical implications, but what do you want to do?” she asked JNS. “Wait until 100 women die? What we have now is an accident waiting to happen.”

Referring to the Meron tragedy, she said, “we are painfully more aware than ever about what happens when professionals are ignored, and everyone thinks you can wait and sort it out and it’s no one’s priority.”

“Life,” she emphasized, “comes before anything.”