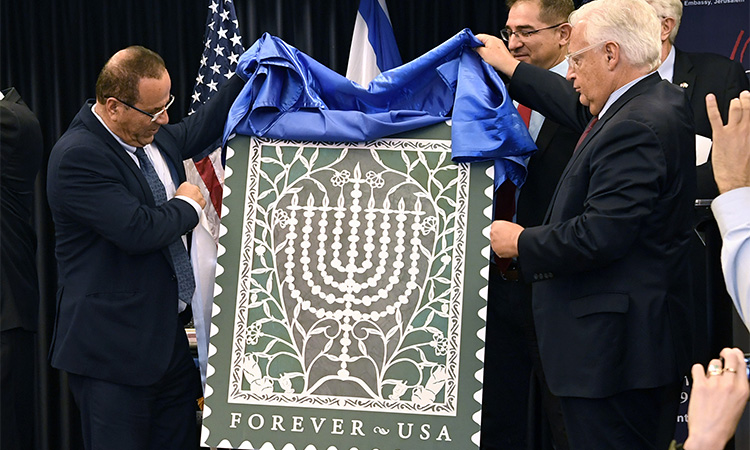 By now, many people have noticed that on sale at the U.S. Post Office is this year’s Hanukkah stamp, which features a papercut version of the 9-branched menorah (one arm being the shamash) set within an ancient oil jug, such as the one that might have contained the final drops of oil used by the Maccabees for the rededication of the Holy Temple.  In the background design there also are dreidels and pomegranates.

In its Fall 2018 issue, The Israel Philatelist relates that the stamp created by artist Tamar Fishman had its first day of issue Oct. 16 at the famed Touro Synagogue in Newport, Rhode Island, the same synagogue to which George Washington wrote a letter saying that the new country of the United States would give to “bigotry no sanction.”

In an article written for the quarterly philatelic journal, Fishman said that her art is inspired by the “folk tradition of the Jewish papercut,” which was practiced particularly by the Ashkenazim of Europe, but also by the Sephardim living in countries ringing the Mediterranean Sea.  The papercuts were created with pen knives cutting designs into vertically folded pieces of paper, resulting in symmetrical patterns when the paper was opened.

“Preparing the design for the 2018 Hanukkah stamp was a pleasure and a challenge,” Fishman wrote.  “Typically my paper cuts measure about 18 x 23 inches. The conventional size of today’s postage stamps, about one-inch square, required a degree of miniaturization I had never before attempted.”

She added that she was “especially thrilled to learn that Israel, where I was born, agreed to the proposal for a joint issue.”

The U.S. version of the stamp, which sells for 50 cents, is designated a “Forever” stamp, meaning that it can continue to be used for full postage for a one-ounce letter, even if the price of a first-class stamp goes up from the current 50 cents.  The Israeli stamp, which bears the same interior design, sells for 8 New Israeli Shekels and 30 Agurot, which is the rate for sending a first-class letter or postcard from Israel to the United States.