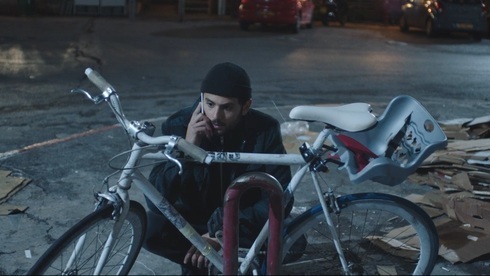 “White Eye” is one of five nominees in the category that will compete for the Oscar at the 93rd Academy Awards on April 26. The nominations were announced early Monday.

The film is a fast-moving, hard-hitting flic that starts with a stolen bicycle and delves into privilege, bias, and Israel’s treatment of one of its most disadvantaged communities – African migrants, refugees, and asylum seekers.

“This is the most exciting moment in my life,” Shushan tells NoCamels on Monday. “For a few weeks, I couldn’t sleep at all, it felt like five years. I have the most amazing team, I’m so happy for all of us.”

“White Eye” tells the story of Omer Attias, a Tel Aviv resident who finds his stolen bike on Meretz Street, where an Eritrean asylum seeker claims he bought it from the Tel Aviv Central Bus Station for his daughter. When Omer calls the cops on Yunes — assuming he stole it — the situation becomes more dire than he could have thought.

Shushan told NoCamels last week that he wrote the film based on a similar situation that happened to him in real life. While the moment ended up better than it did in the movie, he explains, Shushan “felt so bad” that he went home and wrote a script about the incident in 40 minutes.

“It was like I woke up from it,” he said, “I’ve always compared it to that because I used to do it when I was younger. I had lots of crazy dreams and I used to wake up and I had a notebook and I just started to write everything before I forgot it. So it felt like that, to experience something crazy and to write it down before you forget all the details.”

“It affected me really hard,” Shushan added, “I really wanted to make a film and to solve the issue and also try to bring a message to the audience that if they think and breathe before they react, maybe they can save someone else’s life.”

Shushan shot the entire movie in just one take, which meant the film’s actors had to do many rehearsals and keep shooting the movie in its entirety over and over.