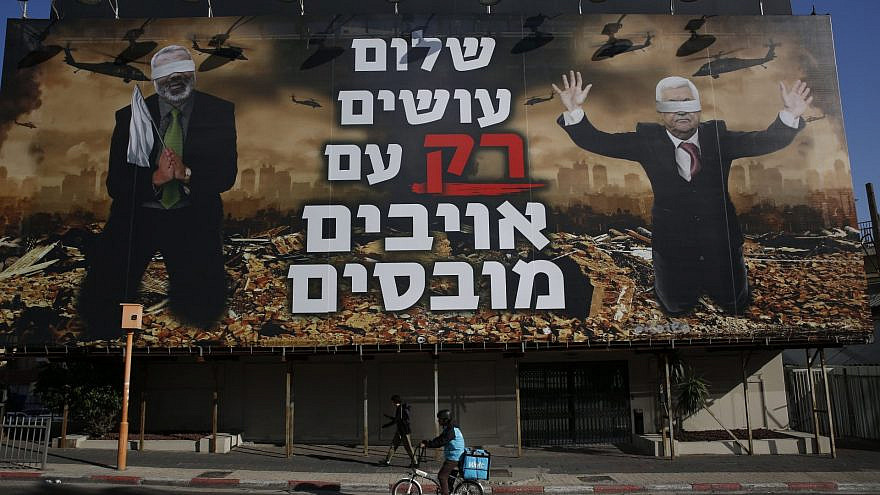 Israel’s Supreme Court on Sunday condemned Tel Aviv Mayor Ron Huldai for ordering the removal last year of billboards put up in the city as part of a campaign by the Middle East Forum’s (MEF) Israel Victory Project.

In the run-up to Israel’s March 202o election, the MEF ran several giant billboards in prominent Tel Aviv locations. They depicted Palestinian Authority leader Mahmoud Abbas and Hamas leader Ismail Haniyeh on their knees, waving a white flag, and bore the words “Peace is only made with defeated enemies.”

Within hours, Huldai, who recently established a new party to compete in Israel’s upcoming elections, ordered the billboards torn down because they “incited violence.” He and his spokesman even compared them to Nazi imagery.

The Supreme Court on Sunday rejected Huldai’s action as unjustified, ruling that he had exceeded his authority in repressing the MEF’s freedom of speech. The justices ruled that MEF may resubmit the billboards if it chooses to do so and that the mayor must reconsider his former stance “given the difficulties of that position.”

The billboards were part of the Israel Victory Project’s campaign to convince Israelis that the only way to end the Palestinian-Israeli conflict, and the attendant global hostility to Israel, is to force the Palestinians to give up their century-long campaign of rejectionism.

Daniel Pipes, MEF president, added that “MEF plans to repost the IVP billboards—just in time for new national elections and for Ron Huldai’s participation in them.”