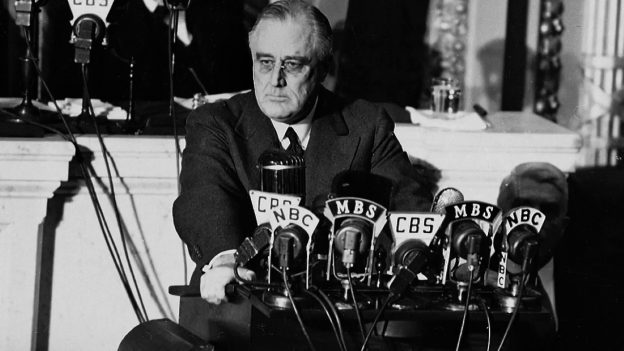 President Franklin Delano Roosevelt delivered his “Four Freedoms” State of the Union Address on this date in 1941, in which he justified America’s role as an “arsenal of democracy” against Nazism through the lend-lease program. Roosevelt, entering his third term, described the “basic things expected by our people” as including “jobs for those who can work,” “security for those who need it,” and “ending of special privilege for the few,” and the “preservation of civil liberties for all.” He foresaw a post-war world marked by four universal freedoms: freedom of speech and expression, freedom of religion, freedom from want, and freedom from fear (“a world-wide reduction of armaments” to prevent military aggression). This peroration to the speech was not created until the fourth draft, when the President essentially dictated it. Roosevelt’s small speechwriting team included the Texas-born Samuel Rosenman, the first White House Counsel, who had already coined the phrase “New Deal.” Rosenman edited The Public Papers and Addresses of Franklin D. Roosevelt between 1938 and 1950.

“He dictated the words so slowly that on the yellow pad I had on my lap I was able to take them down in longhand myself as he spoke.” —Samuel Rosenman