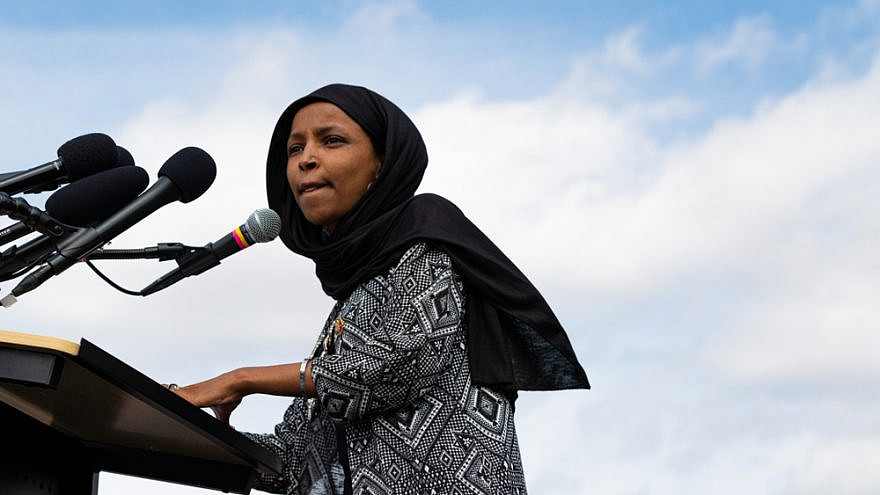 A dozen Jewish Democratic lawmakers have issued a statement strongly condemning recent remarks made by Rep. Ilhan Omar (D-Minn.), who equated Israeli and U.S. actions to terrorist groups like Hamas and the Taliban.

In a tweet on Monday, she wrote: “We must have the same level of accountability and justice for all victims of crimes against humanity. We have seen unthinkable atrocities committed by the U.S., Hamas, Israel, Afghanistan and the Taliban.”

Her tweet also included a link to a video, where she questioned U.S. Secretary of State Antony Blinken on America’s opposition to the International Criminal Court.

It continued, noting that while America and Israel are “imperfect, like all democracies,” using “false equivalencies give cover to terrorist groups.”

The lawmakers urged Omar to clarify her remarks. Instead, she hit back on Thursday morning, accusing her Democratic colleagues of using “Islamophobic tropes.”

“The constant harassment & silencing from the signers of this letter is unbearable,” she wrote on Twitter.

However, Omar later released a statement on Thursday afternoon, claiming the conversation with Blinken was “was about accountability for specific incidents regarding those ICC cases” and was not “a moral comparison between Hamas and the Taliban and the U.S. and Israel.”

“I was in no way equating terrorist organizations with democratic countries with well-established judicial systems.”

The statement by the group of pro-Israel Democrats came after some two-dozen Democratic lawmakers had debated on Wednesday on how to rebuke Omar for her statement and whether to call her out by name.

Once again, he said, “she emboldens terrorist organizations like Hamas, which has explicitly called for the outright annihilation of Israel and the genocide of all Jews. This hatred against Israel breeds hatred against Jews, and we have recently seen anti-Semitism surging across America clearly stoked by the hateful rhetoric used to demonize Israel, America’s closest ally in the Middle East.”

‘The difference should be clear to everyone’

The remarks by Omar are part of an increasingly critical tone that progressive members of the Democratic Party have taken in recent weeks aimed at the Jewish state.

During the 11-day conflict last month between Israel and Hamas in the Gaza Strip, progressives spoke out forcefully against Israel, accusing the Jewish state of human-rights violations and potential war crimes. They also called for conditioning U.S. aid to Israel and moved to block a weapon’s sale agreement to Israel.

However, other colleagues in Congress, including Democrats, accused them of stoking anti-Semitism, which saw a sharp uptick during the Gaza conflict and afterwards.

Omar’s statement also renewed calls by Republicans to have her removed from the House Foreign Affairs Committee. Many Republicans had opposed her membership on the committee when she was selected by House Speak Nancy Pelosi (D-Calif.) in 2019.

“Ilhan Omar must be removed from the House Foreign Affairs Committee,” wrote Jewish Republican lawmaker Rep. Lee Zeldin (R-N.Y.). “She should have never been appointed to this committee in the first place.”

Omar has a history of anti-Semitic rhetoric and activity. In 2019, she suggested that supporters of Israel were motivated by money, tweeting: “It’s all about the Benjamins.”

On Twitter, Israel’s ambassador to the United States and the United Nations Gilad Erdan questioned how “a member of Congress could compare Israel and the United States—two vibrant democracies with robust legal systems & militaries that strive to avoid civilian casualties—with jihadi terrorists who purposely murder civilians?”

“The difference should be clear to everyone,” he wrote.