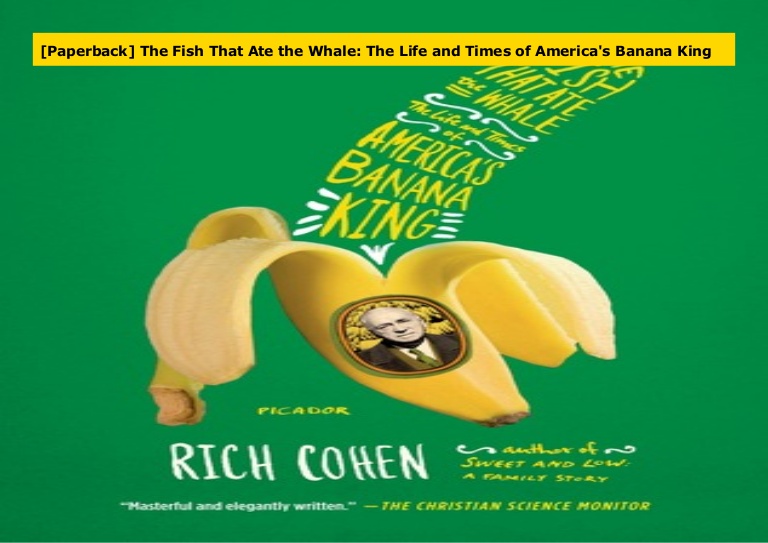 It’s my joy to review for this publication many current books — especially memoirs, biographies, and novels — but occasionally when there are none left on the pile to review, I have the opportunity to tuck into older books recommended to me by friends and relatives who know that I love to find stories corroborating this publication’s mantra that “There is a Jewish story everywhere.”

Dr. Ben Dishman lent to me The Fish That Ate the Whale: The Life and Ties of America’s Banana King by Rich Cohen, a paperback edition brought out in 2021 by Farrar, Straus and Giroux of New York.  It tells the exciting story of Sam Zemurray, who started his career peddling ripe bananas at stops along a southern train route, and rose to become the head of the United Fruit Company, with more than a million acres of land, 100,000 employees, and the power and chutzpah to topple Central American governments.  Those governments that he put into power — one in Honduras, and later another one in Guatemala — became known as “Banana Republics.”

Zemurray, a Jewish immigrant from the Russian pale, exemplified for some the American dream.  Starting with nothing but ambition in the early 20th century, he built for himself a multimillion dollar empire.  For others, he represented all that was wrong with America.  He was an imperialist, who bent weaker foreign governments to his will; a capitalist, who paid most of his employees very low wages; and a monopolist, who could undercut smaller competitors who didn’t have his resources.

His story reminds me of the movie moguls who built the film industry in Hollywood.  They also found opportunities, devoted themselves slavishly to their goals, and didn’t let anyone get in their way.  When they finally retired, as Zemurray eventually did, they devoted themselves to philanthropic causes.  In Zemurray’s case, he made large grants to Tulane University in New Orleans, where he made his home, and supported the Zionist cause after World War II, helping to ship guns and other weapons to the Haganah.

One could find stories about Zemurray in many places such as New Orleans where he started the Cuyamel Fruit Company that first competed with United Fruit and later was merged into the giant, providing Zemurray the opportunity to collect proxies and take it over.  There are Zemurray stories in Boston where United Fruit established its headquarters long prior to the takeover.  But to get the real sense of the man, you might want to travel to Puerto Cortes, Honduras, from which he shipped the bananas, or in nearby Omoa, Honduras, where he kept an office.  Zemurray tramped all over Honduras, learning the land, the people, and every aspect of the banana growing business. Later, he established similar beachheads in other Central American countries,

Author Cohen did a marvelous job of tracking Zemurray’s life, visiting these and other places, and also toiling away in various archives.  It’s quite a good book and I thank my friend Ben for loaning it to me.

Another book demonstrating the “Jewish story everywhere” theme was Michael Turns the Globe, published for children in 1946 by the Union of American Hebrew Congregations in Cincinnati.  My daughter Sandi Masori, who now has boys aged 20 and 14 of her own, found it in her library.  I think it may have been given to her by the late Rabbi Morton Cohn, founder of Temple Emanu-El.

Written by Deborah Pessin, it offers short stories of visits to Jewish communities in “the countries of Mexico, Iraq, Ethiopia, Syria, India, Arabia (Yemen), China, Morocco, Palestine, the Ukraine, and England.”  Note that the year of publication was 1946, two years before the establishment of the State of Israel and what is known as the Farhud, the consequent expulsion of Jews from Arab lands.

Let me give you a sense of how Jewish life was depicted in Arab lands.  In Damascus, Syria, wrote the story teller, “I never tired of asking Ibrahim questions and he never tired of answering them.  Donkeys with loads of cucumbers, Turkish merchants in silk gowns and turbans, strings of camels with mirrors on their knees and red tassels on their heads — all passed up and down the Street Called Straight [which bisected the city.]  Cries of peddlers mingled with the din of the bazaars.  Men on horses came galloping down the street, sending everyone flying for shelter.  But Ibrahim sat quietly on his sill, as though he had sat there from the beginning of time, puffing away on his huge nargileh.”

In Fez, Morocco:  “‘It is time for the evening prayers,’ he said, and he crossed the courtyard to Samuel’s house.  ‘It is the custom with us,’ Simeon explained, ‘to recite our prayers around the crib of a new-born son.  Next week we pray at the synagogue again.’  In a darkened room in Samuel’s house, we stood grouped around the crib of the sleeping child and chanted the Hebrew evening prayers.  At the head of the crib stood Samuel, his face proud and happy.  From another room came the clatter of dishes as his wife prepared the evening meal.”

The lesson for my fellow avid readers: Keep up with new books, but don’t forget to revisit older ones.”