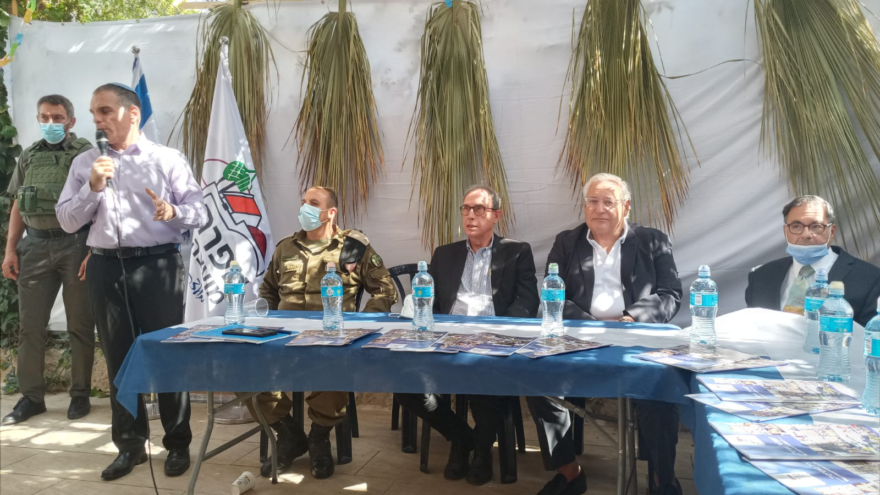 Over 100 Arabs and Jews gathered Monday at the home of Efrat Mayor Oded Revivi to put religious coexistence on display on the final day of the Jewish festival of Sukkot.

The gathering was attended by former U.S. Ambassador to Israel David Friedman, head of the Civil Administration of COGAT (Coordinator of Government Activities in the Territories), Israel’s Minister of Diaspora Affairs Nachman Shai, Deputy Mayor of Jerusalem Fleur Hassan-Nahoum, diplomats from neighboring Arab nations, as well as dozens of local Arab leaders.

Many of the Arabs in attendance preferred not to be photographed or identified in the press. Publication of attendees at prior years’ gatherings led to interrogation and administrative detention by the Palestinian Authority.

However, the Arab leaders in attendance related stories of close friendships and cooperation with their Jewish neighbors.

“The area serves as model for coexistence,” Revivi said.

Minister of Diaspora Affairs Nachman Shai, the highest-ranking Israeli official to attend, stated that the event highlights the reality that “Arabs and Jews must live together. There is no other alternative.”

Shai noted that “We have been living together for generations and we will live together for many years to come. This Sukkah of Peace here in Efrat helps us to create a reality of peace.”

Friedman, who played a critical role in the establishment of the now-one-year-old Abraham Accords between Israel, United Arab Emirates and Bahrain, explained why the accords were named after the Jewish prophet Abraham, who is also heralded as a prophet in Islamic faith.

“We chose the name of Abraham for the Abraham Accords because of Abraham it says he will be the father of many nations,” Friedman said.

He added that not only is it good to coexist, but that “It is even a mitzvah for Jews and Arabs to be together. It is obligatory.”

Friedman was presented an ancient map of Israel found in Jordan.