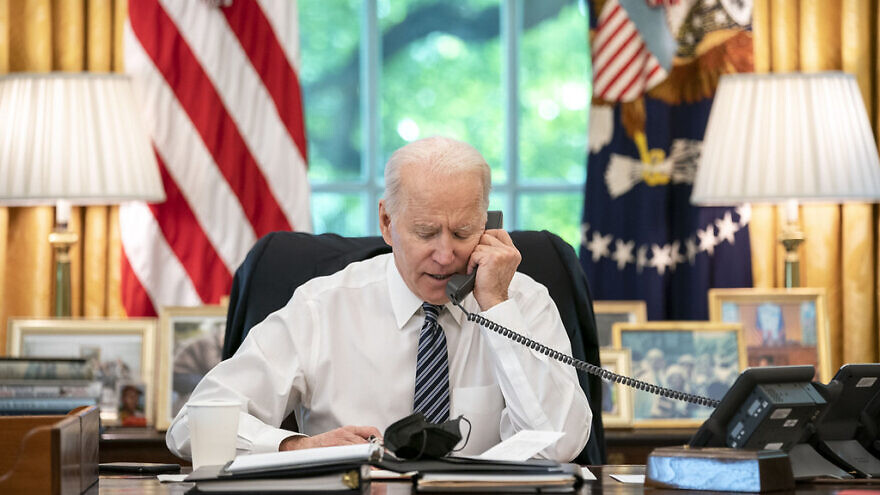 Iran’s continued provocations through its terror proxies and with its nuclear program appear to be frustrating efforts by the Biden administration’s efforts revive the Iranian nuclear deal.

On Tuesday, the International Atomic Energy Agency (IAEA) confirmed that Iran has begun enriching metal to 20 percent, which European diplomats said was a “serious violation” of Iran’s commitments under the 2015 Joint Comprehensive Plan of Action, or JCPOA.

This move comes as last week the United States told the U.N. Security Council that it launched airstrikes against an Iran-backed militia in Syria and Iraq to stop the militias and Iran from future attacks.

“This military response was taken after non-military options proved inadequate to address the threat, with the aim of de-escalating the situation and preventing further attacks,” U.S. Ambassador to the United Nations Linda Thomas-Greenfield wrote in a letter seen by Reuters.

“The United States knows that the Iranian government cares first and foremost about staying in power. If that means sacrificing its non-Iranian allies—most specifically, Lebanese, Iraqi, Syrian and Yemenite Shi’ites—so be it. For the Iranians, these fellow Shi’ites are expendable,” he said.

“The Iranian government knows that when Iranians die in combat, their families and friends often protest against the government,” he noted. “Iranian history has examples of demonstrations spiraling out of control and sparking revolutions.”

U.S. military mission spokesman Col. Wayne Marotto, who is based in Baghdad, said that “U.S. forces have the inherent right to self-defense and responded with counter-battery fire at rocket launching positions and one Hellfire from a UAV, which resulted in one enemy wounded in action.”

Phillip Smyth, a Soref fellow at the Washington Institute and an expert on Shi’ite Islamist groups, told JNS that attacks between American forces and Iranian-backed militias have been going on for over a year, and “the trend demonstrates a clearly structured process of escalation.”

“I don’t think these types of attacks will cease; [they] are designed to be small demonstrations of power and technological savvy by these Iranian-backed groups,” said Smyth.

Smyth, however, assesses that a red line was hit by these forces that triggered the U.S. strike.

“Regardless, neither party is interested in having this heat up to the point of no return, at least not yet,” he said.

‘Acknowledge their own mistakes’

Michael Rubin, a senior fellow at the American Enterprise Institute, told JNS that for all they castigate former President Donald Trump for, U.S. President Joe Biden’s foreign policy “seems a more noxious mix of politics and ego than Trump’s.”

“Politics guide Biden’s choice to do the opposite of Trump on almost every issue,” he continued, commenting on Biden’s insistence to return to the nuclear deal, despite Iran’s continued provocations and violations.

“But ego comes into play less with Biden than his staff: Jake Sullivan, Jon Finer, Antony Blinken, Wendy Sherman, and perhaps Bill Burns—all have tremendous skin in the Iran nuclear deal. Moreover, many owe their careers to it,” said Rubin, a former Pentagon official.

It’s one thing to disagree with Trump, former Secretary of State Mike Pompeo and that administration’s “maximum pressure” campaign, he argued, but “many on Biden’s team seem unwilling to acknowledge any fault with the JCPOA and Obama administration policy.”

“To do so would be to acknowledge their own mistakes. Their egos won’t allow it. The result is a policy guided more by wishful thinking and fantasy than reality, and one that increasingly appears like a slow-motion train wreck,” concluded Rubin.

The fighting against Iran and its proxies in Syria and Iraq is juxtaposed against ongoing indirect nuclear talks between the United States and Iran.

On the one hand, the Biden administration signals it is eager to revive the 2015 nuclear deal and end sanctions against the regime; yet on the other, it is fighting a proxy war against them. Iran, for its part, is leveraging its aggressive action and terrorism in the region to pressure the West into making a better deal.

On Tuesday, U.S. State Department spokesman Ned Price called on Iran to end its brinkmanship and return to negotiations on the nuclear deal.

“It is worrying that Iran is choosing to continue to escalate its non-performance of its JCPOA commitments, especially with experiments that have value for nuclear weapons research,” said Price. “It’s another unfortunate step backwards for Iran.”

Rhode said a difference in culture is causing difficulty for the West to understand the Iranian mentality in the nuclear negotiations: “American culture is legalistic. Signed agreements are the basis on which how people, companies and countries interact. Not so for Iran and most other non-Western cultures.”

For them, written agreements are, therefore, rarely a means of solving problems. “They are just a means to an end,” he said.