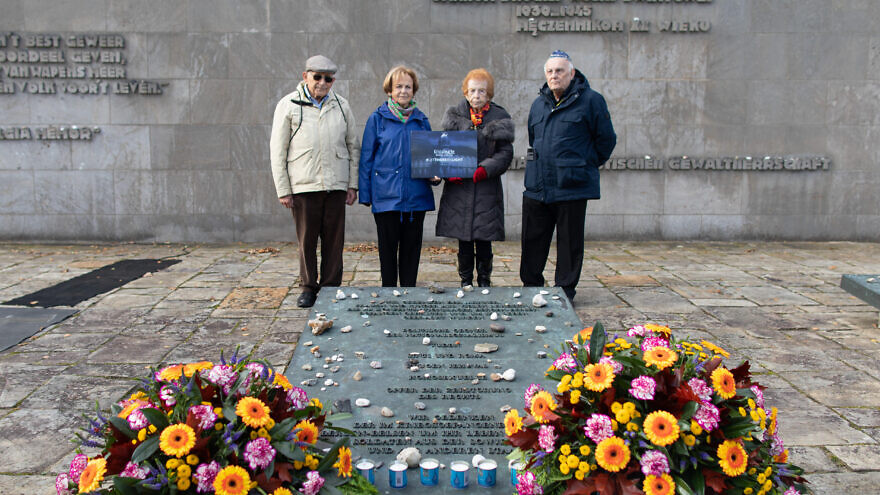 GERMANY—The two provocateurs who approached the group at the Ravensbrück concentration camp in Germany at the end of October knew what they were doing. What they probably didn’t realize was that they helped cement the very reason the group was there in the first place. The common denominator of most if not all, Holocaust-education efforts is to teach that the tragedy and its underlying causes must never be forgotten or repeated and that the Jews will never again become defenseless victims of genocide. Those two men drove home that point succinctly.

The delegation visiting the camp was from March of the Living UK, which was on its first educational journey since the outbreak of the coronavirus. The organization had wanted to commemorate the 75th anniversary of the liberation of the Bergen-Belsen concentration camp by British forces, but the pandemic prevented the delegation from traveling until now. The delegation, which included four Holocaust survivors and about 80 participants—Jews and non-Jews, aged 19 to 90—visited Berlin, Wannsee, Ravensbrück and Bergen-Belsen.

The stark juxtaposition of the pastoral German countryside with its lakes and trees to the horror that took place in the nearby concentration camps remains mind-boggling. From Wannsee to Ravensbrück to Bergen-Belsen, it seems the Nazis always chose the most beautiful places to plan the genocide of, inter or kill innocent people.

The Holocaust survivors who led the delegation were Mala Tribich, Eve Kugler, Alfred Garwood, and Harry (Chaim) Olmer, all of whom live in Britain and most of whom have taken part in several March of the Living UK delegations to Poland in the past.

She recalled seeing soldiers standing on each side as they undressed and described how she “nearly died of embarrassment. I’ll never forget that horrible moment,” she said.

“We all looked the same,” she continued. “It really did something to our souls. It’s very difficult to describe what it feels like to be stripped of your personality. We somehow didn’t feel human anymore. It was such a shock to our system. Within seconds, they took our identity; this is one of the hardest moments I can remember. One of the effects it had on us was to lose hope, and without hope, there is no survival. My aunt Frania Klein died within a short time. My best friend Pema died soon after that. I also cannot forget the cold that penetrated our bones. There was no way to warm up. The winter in Germany was freezing. People died next to me from cold and hunger.” 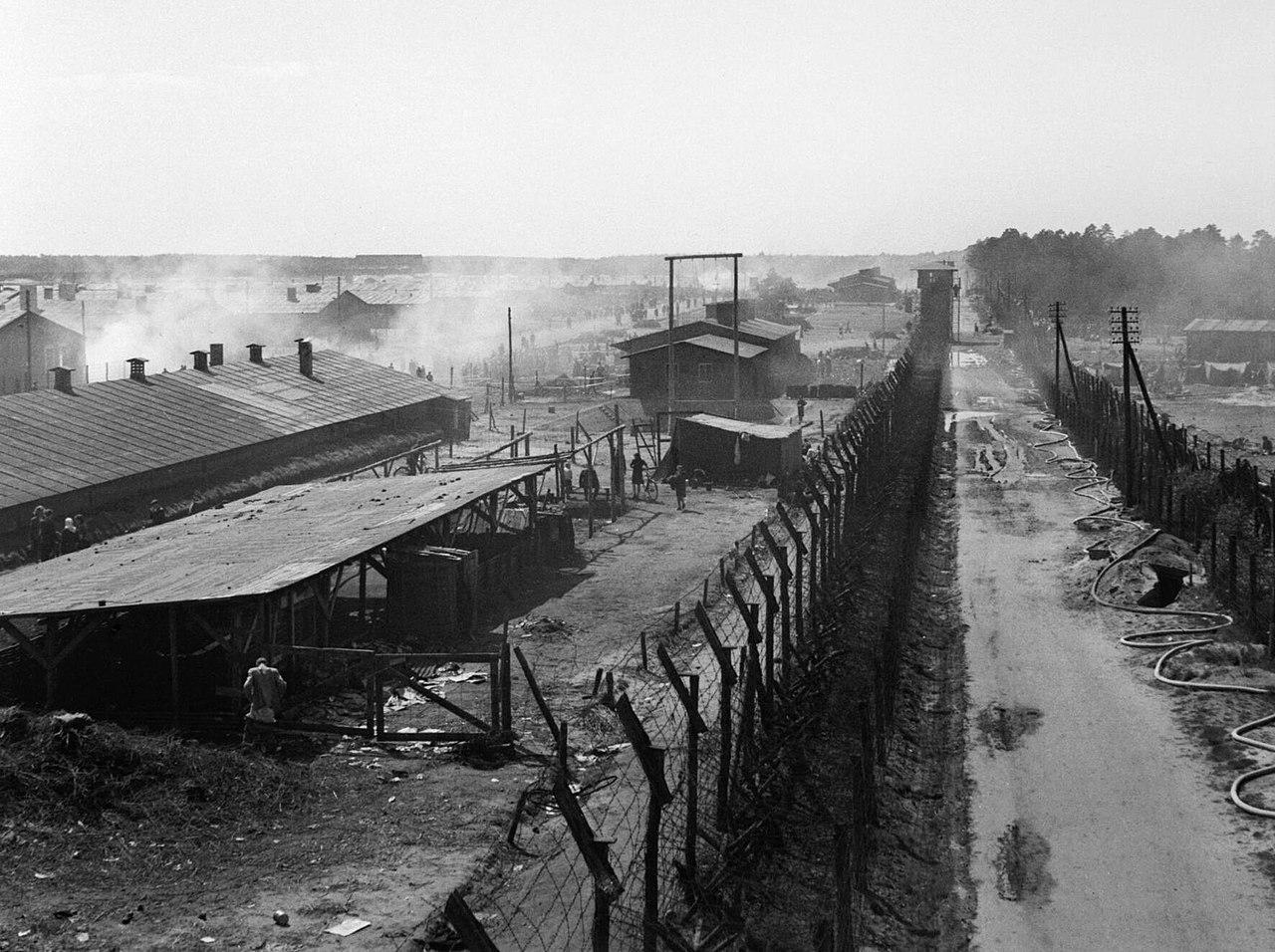 A view of the Bergen-Belsen concentration camp after liberation. Credit: Wikimedia Commons.

Tribich said that “It hurts a lot to be back, but I admit I had to do it, even if only to remember the victims. I feel that if we do not mention them, they will be forgotten, as if they never lived. As the generations go by, this is the way to make sure the victims are not forgotten, and the memory continues. I am hopeful … that they will never be forgotten.”

‘We died several times, I think’

Scott Saunders, chairman of March of the Living UK, explained to JNS that one of the elements that make the organization unique is that it invites participants who are post-high school, which means the trip can focus on deeper analysis and a more intellectual thought process. “It’s more nuanced because the audience is older,” he said. “It’s a different discussion.”

Saunders also believes that the role of the educator is supremely important, and for that reason, he believes in bringing more educators to lead smaller groups, as opposed to having large groups and few educators. That ratio, according to Saunders, makes for a more meaningful trip for the participants because the groups are more intimate and the discussions deeper.

Earlier in the day, the delegation visited the Berlin-Grunewald station from which the Nazis deported many of Berlin’s Jews. The delegation also visited the site of the infamous Wannsee Conference where the Nazis planned the systematic destruction of European Jewry.

The delegation then visited the site of the Bergen-Belsen concentration camp in part because it was liberated by British soldiers and because two of the survivors on the trip survived the camp.

Tribich was transferred from Ravensbrück to Bergen-Belsen in February 1945, just two months before liberation.

She recalled her experience.

“They walked us into the camp and what we saw was the smoke, and there was a terrible smell. And through that smoke, you saw people who were really skeletons. And they were shuffling along like zombies. They would collapse and die. You could be speaking to someone, and she would literally drop dead in front of you. There were dead bodies all over the place. There were piles of naked, twisted, decaying corpses. It was a horrific sight.”

When asked whether she remembers the liberation, she said: “I was ill with typhus, and I remember lying on my upper bunk by the window in this children’s home and—you know with typhus you’re unconscious most of the time; it is a terrible illness. I remember opening my eyes and I could see people running, and I didn’t know where they were running or why. But all I could think was how do they have the strength to run?”

Asked how she had the courage to live, she replied, “I don’t know how to answer the question. We died several times, I think. I had at least five really lucky escapes, and I know some places where my memorial would be.”

During the visit, a ceremony was held with the participation of Col. Dickie Winchester, Royal Artillery, representing the role of the British Army in the liberation of Bergen-Belsen. Winchester was joined by Lt. Col. Simon Ledger (Ret.) of the 13th/18th Royal Hussars, the lead Armoured Regiment nearby in 1945 that was informed of the horror of Bergen-Belsen. Their Reconnaissance Troop was sent to assess the camp. Both men laid wreaths as representatives of the British Army.

They noted, “This place is of deep importance to us … . On behalf of the British Army and our unit that liberated the camp, we are proud to return here today along with Holocaust survivors who were liberated from Bergen-Belsen and later moved to live in Britain.” 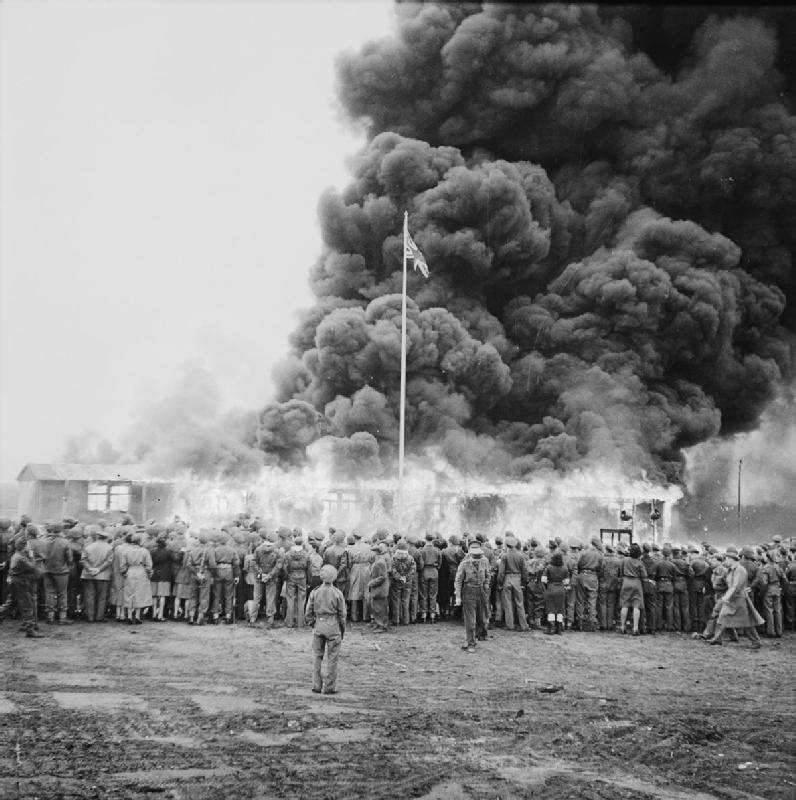 A view of the Bergen-Belsen concentration camp after liberation. Credit: Wikimedia Commons.

“Spending time at this camp has had a huge impact on my life. Today, I am moved beyond words. Seeing the young people on this trip is so inspiring,” Ledger told the delegation.

Garwood, one of the survivors on the trip, was a small child in Bergen-Belsen: “I was born into the war and was almost 4 years old when I was liberated. Children were with their mothers, and I survived in part because my mother managed to breastfeed me. It was a miracle. There were a lot of children in the camp. We played near the corpses. We suffered quietly. The ones who cried were killed. My friends died next to me. I’m coming back here today to tell the story of myself, my family and many victims. That memory will never be forgotten.”

As the group left Bergen-Belsen, Tribich said, “I have now completed the cycle of visiting the most horrible places in my life.”

Saunders noted that “accompanying the survivors to Germany after all these years was essential. Bergen-Belsen holds an important and dark place in British history, and today, we honored the survivors and the British armed forces involved in their liberation. We have spent time in Germany exploring the rise of Nazism and how even in one of the most cultured countries in the world, hatred went unchecked and led to one of the worst atrocities in human history.”

Holocaust education ‘in transition all the time’

While these types of delegations and trips are essential to keeping the memory of the Holocaust alive and relevant, the topic of Holocaust denial and Holocaust education has become increasingly politicized. Educators and historians are faced with the challenge of ensuring the details of the Holocaust do not become distorted and that its lessons are not forgotten.

Esther, a non-Jewish native of the United Kingdom who participated in the delegation to Germany, explained to JNS how she began to study the Holocaust and listen to survivor testimonies and eventually joined a March of the Living UK trip to Poland and had who she described as “the most amazing educator.”

That experience convinced her to pursue Holocaust studies and to work in it in a professional capacity.

She said the biggest challenge of Holocaust memorialization and commemoration is “the fact that we eventually will not have living survivors.”

“Something that is scary to me is the distortion of the Holocaust and not just denial. It’s really hard to believe what happened there, and it is very moving to hear a survivor tell their story. You get a real emotional connection to it, and then you can start to envision or imagine what happened so it gives it gravitas. The challenge for educators is how do you bring someone who did not experience it to Holocaust sites [like Bergen-Belsen where there are barely any traces of the original camp] that will inevitably begin to look more like big open spaces and then connect to history? If people cannot believe it, that leaves the Holocaust open to distortion,” she said.

A participant named Esther brought with her a German friend named Eva to assist March of the Living UK during its trip through Germany.

She explained that “as a German, you say, ‘Oh, we own this topic; we know everything.’ And suddenly you realize it is not true. There are so many narratives.”

Holocaust education is “a work in progress,” she said. “People think now it is changing because soon, the witnesses will be gone. But that is not true. It’s been in transition all the time.”

She explained that she is optimistic about the future of Holocaust education in Germany. “People are sometimes scared that fourth- or fifth-generation Germans might not be interested in the Holocaust because they are so far removed from it, but actually I think that is not the case,” she said. “My experience is that they are very interested. They are more open and free to actually engage with the topic because there is no family in the background” telling them to stay away from it.

As an example, Eva said the national archives in Germany have had a manifold increase in requests from young Germans to learn about their family history. “That to me is very optimistic,” she said.

Saunders reminded the delegation that “Bergen-Belsen was not a death camp, but undoubtedly, it was a camp of death. When we say ‘never again,’ never must mean never. We must always remember the lost; we must always treasure each story from the witnesses; and we must always look to a brighter future,” he said. “This is the message of March of the Living.”