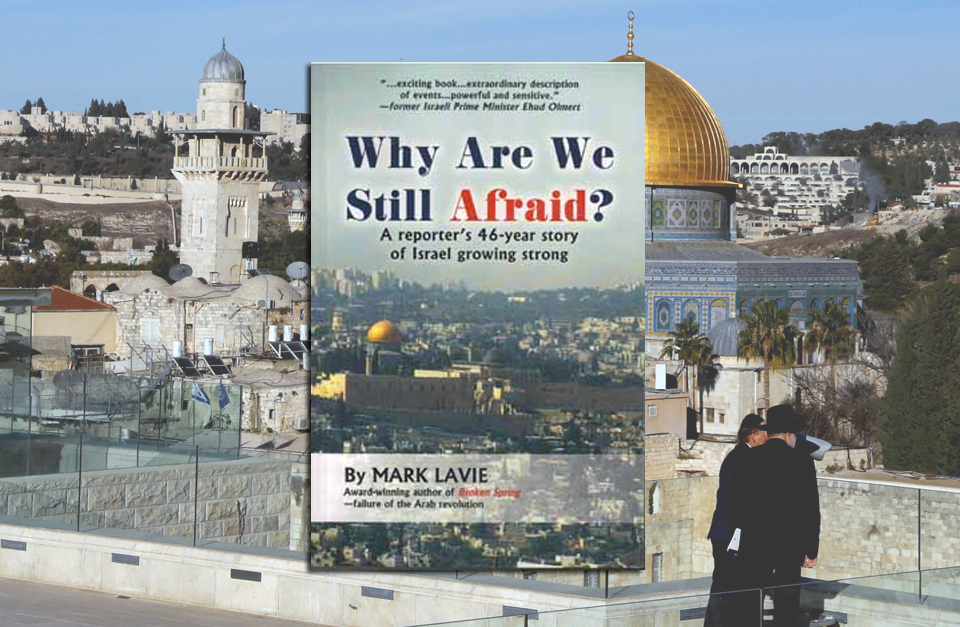 This self-published book by longtime Israeli journalist Mark Lavie starts off with controversy, then subsides into informative and reliable travel journalism, depicting the byways and quirks of Israeli society.  Towards the end of this collection of stories Lavie wrote over the years, the book again offers some controversial opinions.   All in all, it’s an interesting collection that may make you smile, think, and sometimes disagree.

Let’s start with some of Lavie’s controversial takes on the world situation, for example his downplaying of the threat to Israel from Iran.  He reasons that Iran has the capability to build nuclear weapons whether the West and Israel want it to or not, and that further sanctions to prevent A-bomb acquisition will do no good.  On the other hand, sanctions may impoverish Iran’s middle class, who are the most likely to oppose the current Islamist regime.  While Iran’s rhetoric against Israel is hate-filled and anti-Semitic, the mullahs who run Iran are not suicidal.  They know that Israel has a second-strike capacity that could blow apart Tehran.  So, what the world should do is focus on Iran’s actions, not on its words.  Enabling Iran to become a thriving part of the world community of nations will give it something to lose and to have more reason to moderate its behavior.

On the Israeli-Palestinian conflict, Lavie argues that Oslo was a success, not the failure that former optimists believe it to be.  True, it didn’t bring about a final peace agreement, but on the other hand, writes Lavie:

If there had been no Oslo accord, there would be no security barrier.  There would have been no withdrawal from Gaza City, Jabaliya, Nablus, or Ramallah.  Israeli soldiers would still be stationed in the most volatile, crowded hotbeds of violent Palestinian hatred.  The soldiers would be easy targets for Palestinian snipers and bombers – just as they were in Gaza before the 2005 pullout …If we assess the actual security situation in the West Bank and Gaza before and after Oslo, it is clear that the failed accord at least got Israeli soldiers out of the main lines of fire in the West Bank and Gaza.  So Oslo saved the lives of hundreds, perhaps thousands, of soldiers.  There’s only one word for that. Success.

Later in the book, Lavie takes exception to all the attention paid to the BDS movement, which he considers to be an overrated threat to Israel, in fact a failure.  In a 2015 column, he wrote that “in the ten years since BDS began its campaign, Israel’s exports to the U.S. have increased 43 percent…exports to Europe have risen by 33 percent.  That’s despite the world economic downturn of 2009 … Also, Israeli exports to Asia have tripled since 2010.”   If countries aren’t boycotting Israel, neither are they divesting, Lavie wrote.  Foreign investments in Israeli stocks and bonds “jumped from $1.8 billion in 2013 to $9.8 billion last year (2014)—a five-fold increase.   As for sanctions, “there aren’t any.  Europe has begun labeling products from Israeli settlements in the West Bank, but that is not a ban on buying them.  In fact, probably 90 percent of EU consumers couldn’t care less where  product is made, as long as it’s a good product.”

He added that while anti-Israel demonstrators on U.S. college campuses cause disruptions and make Jewish students feel threatened, “figures show that pro-Israel campus groups are growing faster than they are, and anti-Semitic events are actually dropping. Israel’s North American supporters still outnumber Palestinian backers in all age groups by about three to one, according to the latest Gallup Poll.  So Jews both in Israel and North America are really in good shape.”

Lavie is critical of press coverage of the Israeli-Palestinian conflict.  He says Arab reporters in Gaza, who work for western media,  are routinely intimidated by Hamas, and in some instances are actual Hamas operatives.  Among foreign correspondents stationed across the border in Israel, he said, there is a “Palestinians good, Israelis bad” mentality, and stories that tend to contradict that mindset often are killed.  He charges the Associated Press bureau in Israel with having such a mindset, relating that in 2009, the AP killed his story that Palestinian President Mahmoud Abbas had declined a secret peace offer made by Israeli Prime Minister Ehud Olmert, which would have ceded to the Palestinians the equivalent of the entire West Bank, the Gaza Strip, and a geographic link between those two territories.  When he told his editor what he had found out, the editor responded, “That’s not a story.”  Several years later, Israeli TV interviewed Abbas and Olmert, who both confirmed the offer had been made and rejected.  In the meantime, Lavie quit daily journalism in disgust.  He turned to writing books about the Middle East.

In between the chapters of controversy and angst, Lavie proves himself to be an accomplished feature writer, whether writing about disputes between the Ashkenazim and the Sephardim, life on a kibbutz, Israeli traffic, Ariel Sharon’s storied career, how Israel calls up its reserve soldiers, or many other articles  written over a 46-year-long career as an American-born Israeli journalist.

I recommend this book more for such feature stories than for Lavie’s essays on grand strategy.  Some readers, however, may have exactly the opposite opinion.  We’re Jews, after all, bound to have our own opinions.