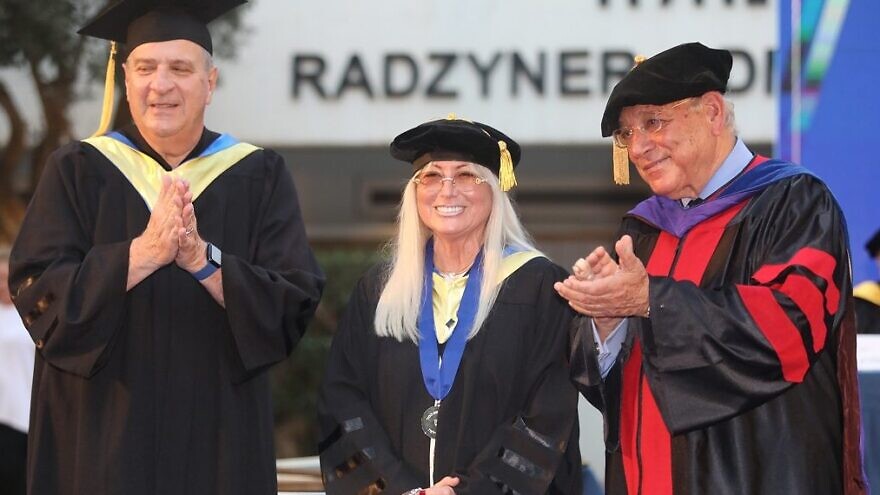 In a ceremony on Monday, Dr. Miriam Adelson and former Israeli President Reuven Rivlin were awarded honorary doctorates from the Interdisciplinary Center Herzliya.

IDC founder and president Professor Uriel Reichmann, who presented the doctorate to Adelson, spoke about her and her late husband, Sheldon Adelson.

“The tension in which you lived never made you forget for a moment your deep commitment to Israel,” he said. “Your husband, Sheldon, was completely inspired by your Zionism, and from there began a public and philanthropic campaign unique in our generation.”

“You never stopped standing up for our people proudly, against the most powerful entities in the world. As a daughter of Holocaust survivors, it’s no wonder that along with a great contribution to the spaceship that took off for the moon you asked for only one thing—that it bear the name: ‘The Jewish people live,’ ” said Reichman.

In her acceptance speech, she said that her late husband had also been awarded an honorary doctorate from IDC two years ago: “Thank you for the exceptional honor. This is of paramount importance for me, just as it was for my late husband, Sheldon, who received the honor here two years ago.”

Adelson spoke of the early days of IDC, saying, “Being an entrepreneur means being interdisciplinary; it means daring rather than fearing, and breaking with convention. Here, extended military service in a meaningful role is given a place of honor and is not a disadvantage. Here, at times of crisis, a sort of online war room operates in which the best minds work around the clock to repel growing hatred of Jews on the Internet.”

“Much of this is thanks to Professor Reichman, Uriel. Thank you for decades of showing Sheldon and me true friendship. You are a wise man and it was an honor for us to speak with you, for example on issues like the nation-state law or the qualities of [Prime Minister] Naftali Bennett, and agree—or disagree. Differences of opinion does not change the fact that we always admired your basic qualities.”

The Adelson family owns the company that is the primary shareholder in “Israel Hayom.” Dr. Miriam Adelson is the publisher of “Israel Hayom,” where this article first appeared.