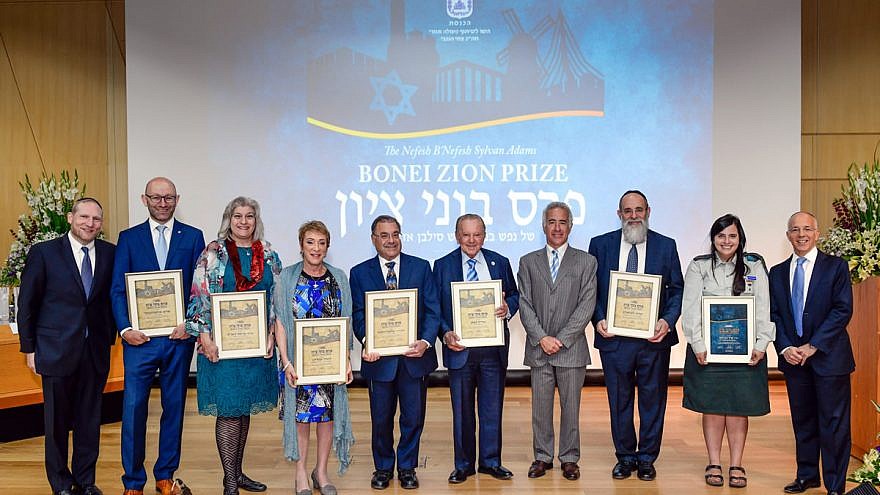 A pioneer of Israel’s “Start-Up Nation” culture, one of the Jewish world’s top educators and a founder of the women’s imaging medical field are among the seven recipients of the 2018 Sylvan Adams Nefesh B’Nefesh Bonei Zion Prize on Oct. 28. The award recognizes olim (new immigrants) from English-speaking countries who have made major impacts on Israel.

The ceremony, attended by 350 people, was held at the Knesset in the presence of Minister of Regional Cooperation Tzachi Hanegbi; chairman of the Jewish Agency for Israel Isaac Herzog; and Minister of Aliyah and Integration Sofa Landver.

“Unfortunately, it is a very painful day today,” said Herzog. “The Pittsburgh Jewish community consists of 50,000 Jews—all committed, Zionistic and well-organized. We just met their leadership here in Israel last week, and little could we imagine there would be such a tragedy.”

Turning more positive, he said, addressing the honorees, “I think it’s exceptional to see such a group of distinguished honorees who have done so much for Israel and humankind at large. You are all incredible people … and we hope to see many more olim in the future.”

“Israel’s development over the past seven decades has been shaped by the remarkable contributions, ingenuity and talents of olim,” said Rabbi Yehoshua Fass, co-founder and executive director of Nefesh B’Nefesh. “They have transformed the landscape of virtually every professional field and community in Israel.”

This year’s recipients were chosen by a panel of committee members in a variety of fields, including Science and Medicine; Community and Nonprofit; Education; Israel Advocacy; Culture, Art and Sports; Lifetime Achievement; and Young Leadership.

“As much as I believe each and every one of these olim made a brave and wonderful decision to move to Israel, the real beneficiary of [their] move is Israel,” said Hanegbi. “The miracle that is the modern State of Israel … would not be possible without the contributions of these olim, and all Israelis owe them a debt of gratitude.”

The 2018 Bonei Zion recipients include Dr. Marcia Javitt, chairman of radiology at Rambam Hospital in the field of Science and Medicine; Rabbi Shlomo Riskin, Founder of Ohr Torah Stone and founding rabbi of Efrat in the field of Education; Linda Streit, Founder of the Daniel Amichai Centre for Rowing and Nautical Studies in the field of Culture, Art and Sports; Kalman Samuels, founder and chairman of Shalva, the Israel Association for the Care and Inclusion of Persons with Disabilities in the field of Community and Nonprofit; Arsen Ostrovsky, executive director of the Israeli-Jewish Congress in the field of Israel Advocacy; Morris Kahn, co-founder of Amdocs with the Lifetime Achievement Award; and Maj. Keren Hajioff, head of public diplomacy in the IDF Spokesperson’s Unit for Young Leadership.

Nominations are now being accepted for the 2019 Sylvan Adams Nefesh B’Nefesh Bonei Zion Prize. The deadline for nominations is Jan. 14.