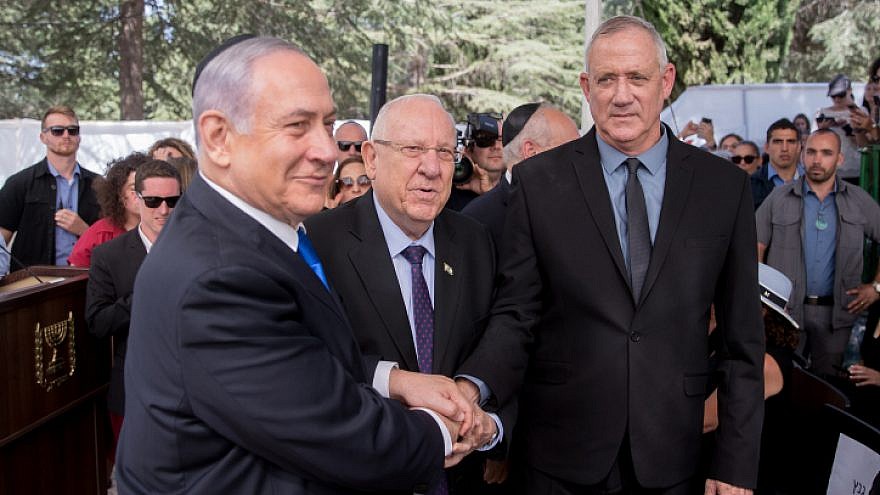 “Benny, it is on us to form a broad unity government,” he told Gantz, whose party is leading with 33 seats compared to Netanyahu’s 31. “The nation expects us, both of us, to accept responsibility and work together.”

Shortly afterwards, photographs emerged of the two men shaking hands at a memorial service for former President Shimon Peres, with President Reuven Rivlin by their sides. In the coming days and after consulting with all the other parties, Rivlin will give the leader he believes most likely to succeed in forming a majority coalition the mandate to do so.

At the memorial, Netanyahu called on Gantz to work together with him, as Peres and his rival Yitzhak Shamir did in the 1980s, in a possible hint at a rotation agreement.

Netanyahu’s call for a unity government comes a day after Likud officials decided that the party would conduct coalition negotiations as a right-wing bloc with the Yamina and United Torah Judaism parties.

Likud officials also reiterated on Wednesday that Netanyahu was and will remain the only candidate the party will support for prime minister.

Despite their anti-Netanyahu campaign platform, following the publication of initial results, Gantz also called for the parties to unite, stating, “For a long time, we were busy with the campaign, and now the time has come to work on what matters. I’ll wish the State of Israel a strong unity government.”

While Blue and White Knesset members say they agree to a meeting with Netanyahu, they have not indicated that they would accept a unity government headed by him.