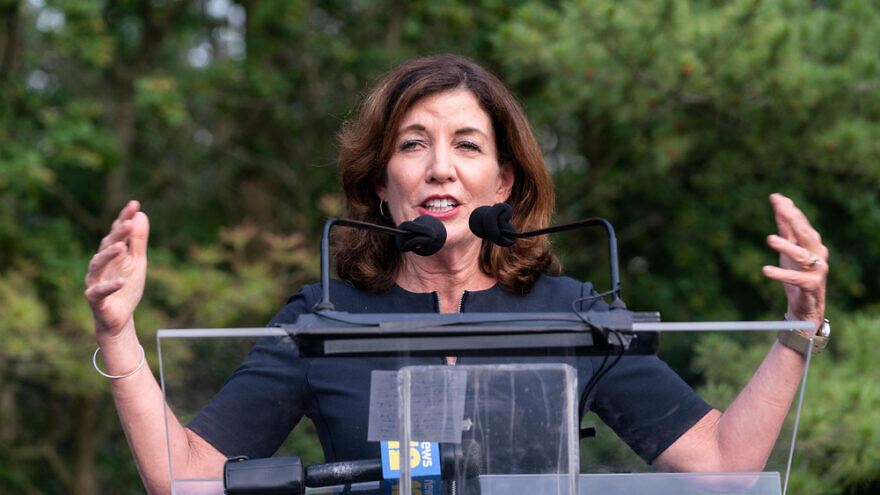 New York Gov. Kathy Hochul visited the Museum of Jewish Heritage in Lower Manhattan on Wednesday to announce an increase in state funding to help secure communities against hate crimes.

“This place is a stark reminder of what happens when hate goes unchallenged. The history is long and the history is sad, and the history is painful,” she said during a press conference. “ … And what we learned from way back, earlier in the past century, is if those seeds [of hate] are not destroyed and crushed early, they bloom even further. Then you have much worse to deal with. I sometimes feel those seeds are starting to grow.”

The state will allocate $25 million to help nonprofits at risk of hate crimes or attacks to improve their security.

The funds, being distributed through the state’s Division of Criminal Justice Services, will support as many as 800 security projects. Among the nonprofits that may now be able to receive security funds are day-care centers, day camps and community centers.

Already, New York has handed out $43 million to 362 nonprofits to boost security infrastructure and enhance preparedness, according to a press release.

“I don’t want a single New Yorker to ever, ever have the fear that’s in the heart of too many people from our Jewish community, our Asian community, our African-American community or any other community that feels they have been under siege,” she said. “We are going to take a very strong stand. We are going to defend, but we are going on offense and let people know that if they dare raise a hand to any New Yorker, they are picking a fight with 20 million others starting with their governor.”

State Rep. Simcha Eichenstein, a Democratic representative from the heavily Jewish Borough Park neighborhood of Brooklyn and grandson of Holocaust survivors, said that getting more security funding has been a priority for state legislators in New York, according to a news release.

“Over the past couple of years, we’ve been trying to get some of these funds prioritized, and while we have worked with my assembly colleagues, … [and] we have been successful in expanding eligibility criteria—for example, the inclusion of summer camps—the funds were never released,” he said. “But Gov. Hockul has been in office just a couple of weeks, and you have managed to get the funds out the door. You have prioritized security.”