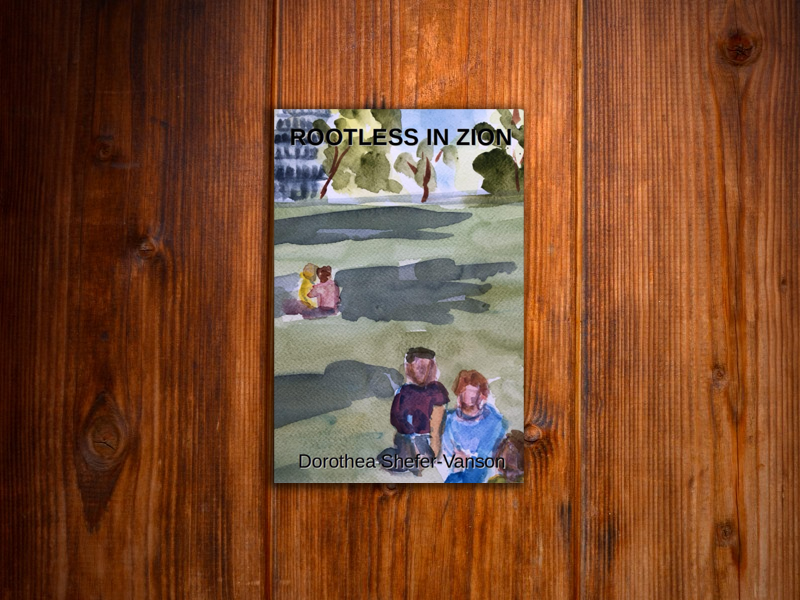 Dorothea Shefer-Vanson’s eighth novel concerns three foreign students studying at the Hebrew University in Jerusalem.  Each of them is from an English-speaking country; specifically the United States, United Kingdom and Australia.  Two are married, one is single; the Australian and his wife have two children; and all are graduate students in the history department. The  year is 1966, one year prior to the Six Day War.

Cynthia, a fictional character whose story most closely resembles that of Shefer-Vanson, who immigrated to Israel from the United Kingdom, is preparing a master’s thesis on the Jewish experience in the Theresienstadt Ghetto, based in large part on a diary left by her late grandmother.

Batsheva, an American, is a doctoral candidate writing a dissertation on Peter Drucker, known as “the father of modern management.”

And Brian, an Australian, wants to develop a master’s thesis on a topic of Australian history.

Each of the three graduate students have issues that keep them from diligently completing their studies.

Brian’s wife has gone back to work, leaving him in charge through a good portion of each day in charge of their two children.  He bridles at the assignment, in what may be described as gender role reversal, and before too long he is fantasizing about other women.

Batsheva, who married an Israeli professor while they both were in California, regrets having moved to her husband’s homeland.  Not able to speak Hebrew, she misses being able to communicate efffectively and is especially distressed that, stuck in Israel, she no longer can be a Jewish voice in support of Martin Luther King and the American Civil Rights Movement.

Cynthia, the chief protagonist of the story, had made aliyah to Israel in accordance with the Zionist belief that every Jew should build the Jewish homeland.  But she left behind in London a lover, with whom she had broken up but for whom she still had feelings.  In Israel, She tries to shed the stuffy, conservative, overly critical ways of her parents, but whether consciously or unconsciously she tends to duplicate those ways.  Her life as a graduate student in Israel is not the fairy tale she had hoped it would be.  As part of a work-study program, she is beset upon  by two professors who load work on her, distracting her from development of her master’s thesis.   Additionally, she wonders if she will ever find love again.

Shefer-Vanson, who writes a regular column for San Diego Jewish World, has a good ear for dialogue, which Brian, Cynthia and Batsheva regularly engage in over coffee in the university’s cafeteria.  Like many college bull sessions, the characters flit from subject to subject — sharing an insight here, a prejudice there — but never going too deeply into any subject.  As strangers in a strange land, however, they develop a bond that substitutes for the friendships they have in their respective homelands.

As the story weaves to its conclusion, Shefer-Vanson paints verbal portraits of Jerusalem’s venues and neighboring communities.   She herself resides in the Jerusalem suburb of Mevasseret Zion, Israel.  Like Cynthia in the novel, she is a devotee of classical music, which Cynthia loves to listen to while studying.

There are a few minor glitches in this book, including confusion over the time line when Cynthia is to visit the home of Batsheva and her husband, as well as several typos — all of which, I assume, will be corrected if and when a second edition is published.  The glitches are not important enough to preclude you from purchasing this book on Amazon, and enjoying the first edition.