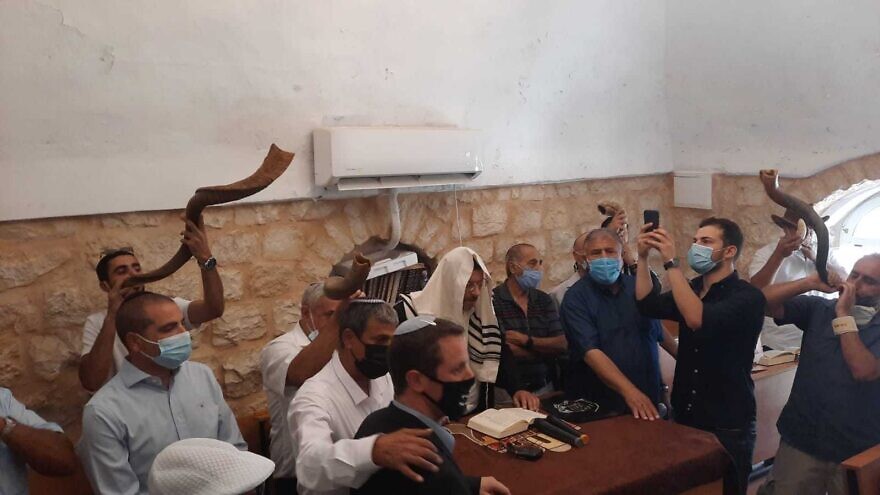 A special Slichot event was held on Monday in the the Old Synagogue of the Yemenite Village—Kfar HaShiloach—in Jerusalem’s Silwan neighborhood.

The event was an initiative of the Public Council of the Kfar HaShiloach Heritage Center, chaired by advocate Gadi Bashari, who also serves as member of the board of the Zionist Archives.

Many members of Israel’s Yemenite community participated in the event, bringing along with them Yemenite shofars which they blew in the ancient synagogue during the Slichot recitation.

His daughter is the poet and author Nurit Zarchi, a winner of the Israel Prize for literature.

In preparation for the event, Bashari visited Zarchi’s home and shared with her the intention of recreating the event in her father’s book. During the meeting, Zarhi said:  “This is so emotional to me, and it is amazing that this living thing has remained of my father’s memory.”

The sounding of the Yemenite shofar in the synagogue is part of the public council’s efforts to commemorate the story of Kfar HaShiloach, the first settlement of the Yemenite Jewish community after making aliya to Israel in the 1880s, said Bashari.

Jerusalem Affairs Ministry Director General Izak called the Yemenite community’s adherence to its traditions “amazing.” The annual Slichot ceremony in Silwan, he said, was “very exciting” and a “lesson for life about perseverance and devotion to the Jewish tradition.”

WZO chairman Hagoel said: “‘And sons shall return to their borders’—it is exciting to see Jewish families returning to settle in the place from which they were expelled. I will do my best to assist any Jewish settlement in the Land of Israel.”

Former Supreme Court Justice Rubinstein said that the ancient synagogue’s renovation, and witnessing the ancient Yemenite tradition there, gave one a sense of “great excitement and ancient grandeur.”

“Their [the Yeminite community’s] huge dedication and devotion to come here in the Ottoman period and live here is greatly inspiring,” he added.