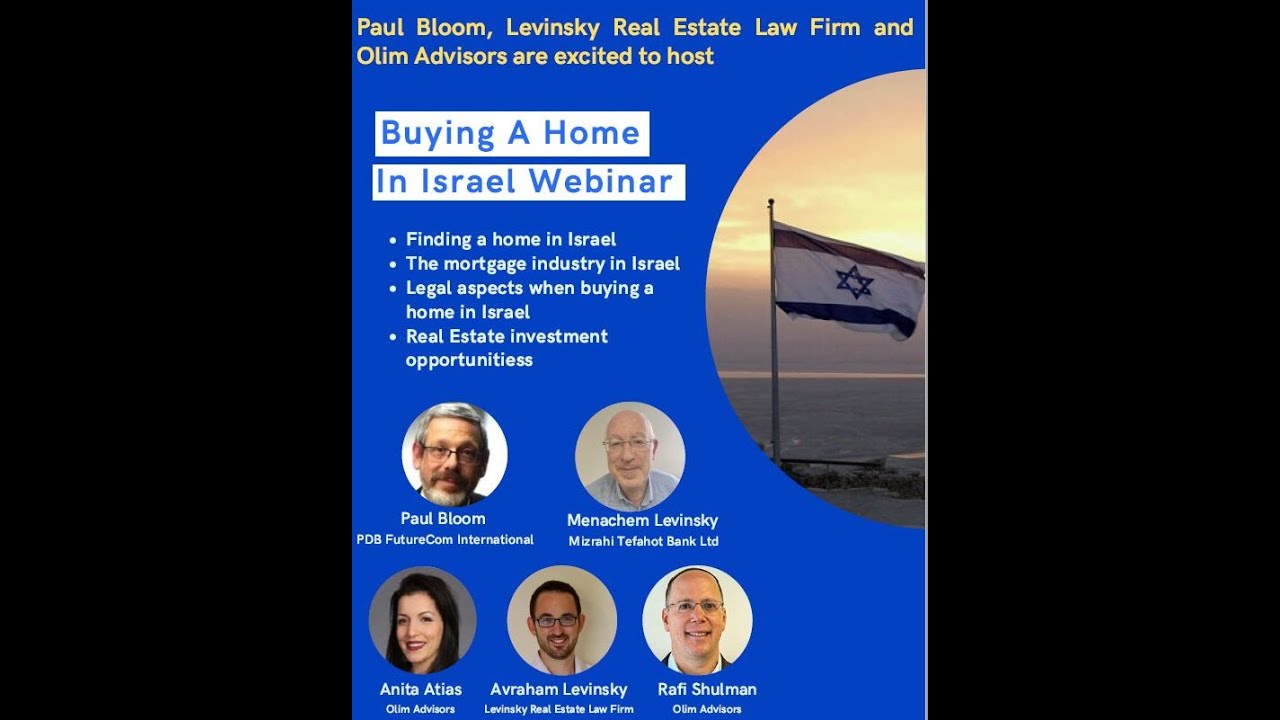 Scott Gross is a man with a mission. He’s scouring the country for the perfect place for his parents to enjoy their retirement.

“It’s one-half investment and one-half a place where they could live in the future,” says Gross. So it has to be just right, he says, since when (and if) his Baltimore-based parents are ready to take the aliyah leap, the place is poised to serve as the proverbial soft landing.

“They’ve worked hard their whole lives,” he adds. “So they deserve a place here where they don’t have to worry about every little thing that could go wrong.”

Which is leading Gross to look at planned construction which has the advantage of being a bit more economical (”buying on paper” representing a substantial savings over the already-built), as well as buying them more time to make a move. “My dad is ready, but my mom’s needed to ease into the idea,” says the 31-year-old Tel Aviv resident. “But when she saw the video about Netanya—with its community of active retirees many of them Anglos—and best of all, being on the water, she fell in love with the place.”

Like the Begoun family of Chicago. Rabbi David and Ali Begoun and family are looking forward to taking possession of their new home in Ramot Bet, a suburb of Jerusalem favored by many an English-speaking immigrant.

“We never doubted we’d make this move eventually, maybe even in retirement, and were always wondering when the best time to move our family would be,” says Ali Begoun.

With one married daughter in Chicago, a second one in Israel, a son in the Israel Defense Forces, a teenaged son staying in the United States to finish high school and their youngest son coming with his parents to start school in Israel, the family is in a variety of life stages and locations. “But when COVID hit, like a lot of other people, we also started to pivot, rethinking our lives and getting more honest with our deepest hopes and dreams.”

And chief among those hopes and dreams, they discovered, was living in Israel. And that meant pulling up roots and moving their lives, including Ali’s life coaching practice and various aspects of their 25-year-old outreach program, the L’Chaim Center, 6,000 miles eastward, to Jerusalem. 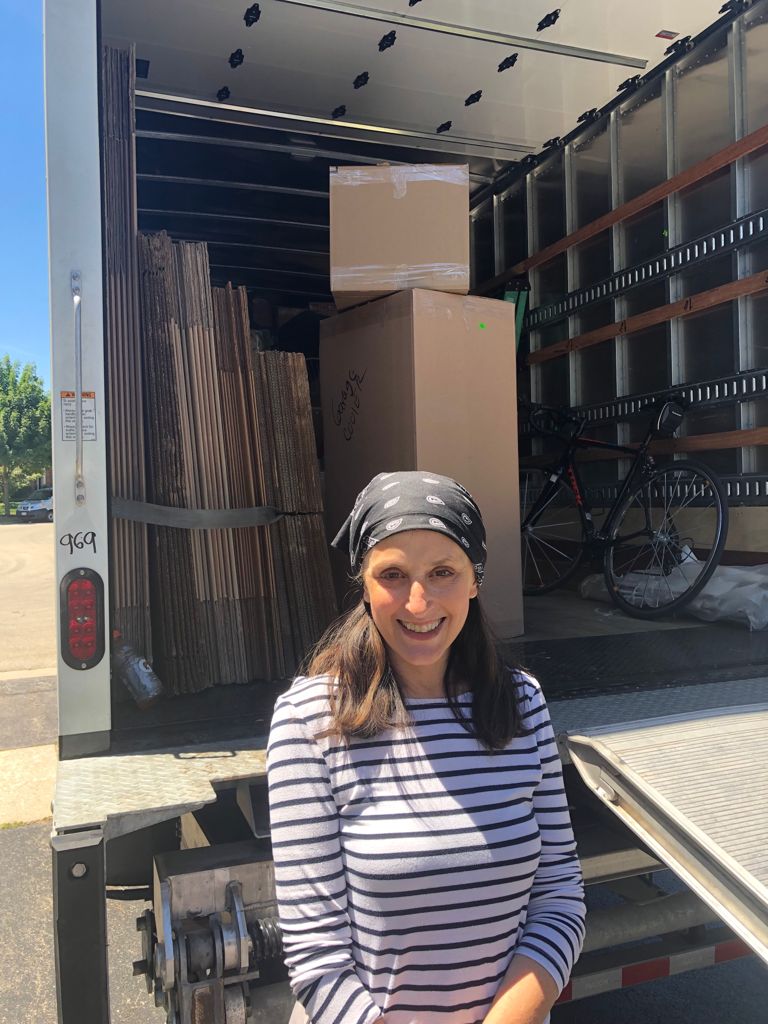 Ali Begoun of the Chicago area in front of the moving van preparing to ship their possessions to Israel. They bought their new home in Ramot Bet sight-unseen for a July move in date. Credit: Courtesy.

“We’ll be the greenhorns, but we know our family will acclimate and that we’ll be in the center of the Jewish world where the Jewish future is being written,” she says. “As my husband says, we want to be part of the greatest story ever told.”

According to Nefesh B’Nefesh, an organization that helps North Americans and Brits make aliyah, the Begouns are not alone; applications are up more than double from 2019.

Israeli Realtors began noticing the uptick of foreigners buying up properties several years ago when anti-Semitism became more overt in France, says Asaf Epstein, vice chair of the Chamber of Realtors in Israel (and chair of the chapter in Jerusalem where his own real estate firm can be found). And these days you’re likely to hear as much French as Hebrew spoken on the streets of Netanya and Jerusalem’s Old Katamon, Baka and Arnona neighborhoods. “Some buyers are setting up homes for themselves and their families to retire to and, with today’s political climate,” says Epstein, “and others are looking for a place where a Jew will be able to feel safe.”

The pandemic and social unrest of the last year-and-a-half are driving up sales for Americans as well, both newly minted immigrants and those making investments for the future. “COVID hit us hard, making us ask ourselves who we are and who we can count on,” says Rabbi David Aaron, dean and founder of Isralight, author of The Secret Life of God, among other titles, and a Jerusalem resident. And it’s not only the safety factor, he adds. “If you’ve been sitting at home in America watching Netflix for a year-and-a-half, seeing Israel come back to life so quickly, it makes you think.”

“They understand the reality of the world around them and the uncertainty of what’s coming next,” says Realtor Kim Bash, a South African native whose move to Israel in 2004 precipitated her founding Kim Bash Real Estate. “So they want to get their foot in the door even when they’re nowhere near ready to make aliyah now, with many people buying bigger than they anticipate needing as an investment.

So much so that Bash has sold more property this past year than any time in her career. “And that’s because the market’s simply gone crazy. We’re seeing places that have sat on the market for a long time now going like hotcakes in bidding wars.”

Where is the craziness centered? Tel Aviv, Ra’anana, Netanya, Ramat Beit Shemesh and Modi’in are among the Anglo-magnets, as well as Jerusalem, where the deep-pocketed often choose properties in Baka, Old Katamon, Talbia, Ramot Bet, Rechavia, Mamilla and the German Colony.

And, naturally, with the law of supply and demand still in effect, prices are shooting up.

In Tel Aviv, the epicenter of eye-popping property price tags, a modest two-bedroom apartment will easily cost 1 million (that’s dollars, not shekels) and one on the beach can run several times that. “Prices have literally gone through the roof this last year, even with the dollar being so low,” says Bash. Realtors are seeing a new trend of families overwhelmed by the hefty prices banding together to purchase a property as a single entity.

But she insists that buying property in Israel is more about the community than the interior space. “I call myself the shodcan (‘matchmaker’) for community; that’s what your real home is, whether you have a growing family or are retired; otherwise, it’s just four walls.”

Unless they’re already Israeli citizens, most Americans have not been able to travel to Israel since last spring, so if they were buying in the Jewish state, it had to be done sight unseen.

And, unlike the Grosses, not everyone has a child in the country dedicated to finding the ideal place for them. Fortunately, finding the right property from across the ocean is powered by such modern-day technological wonders as WhatsApp, Zoom, videos and webinars.

In fact, the video that inspired Gross’ mom to fall in love with Netanya was one of Bash’s “Find Me a Community in Israel” series (see below).

“We knew we wanted Jerusalem and with Ramot Bet all our boxes were checked,” says Begoun. “And when this wonderful cottage came up, we knew it was right.” Bonus: Although they bought it sight unseen, they trusted Bash to know what they were looking for, and a Realtor friend also gave the place the proverbial thumbs-up before they signed intercontinentally. 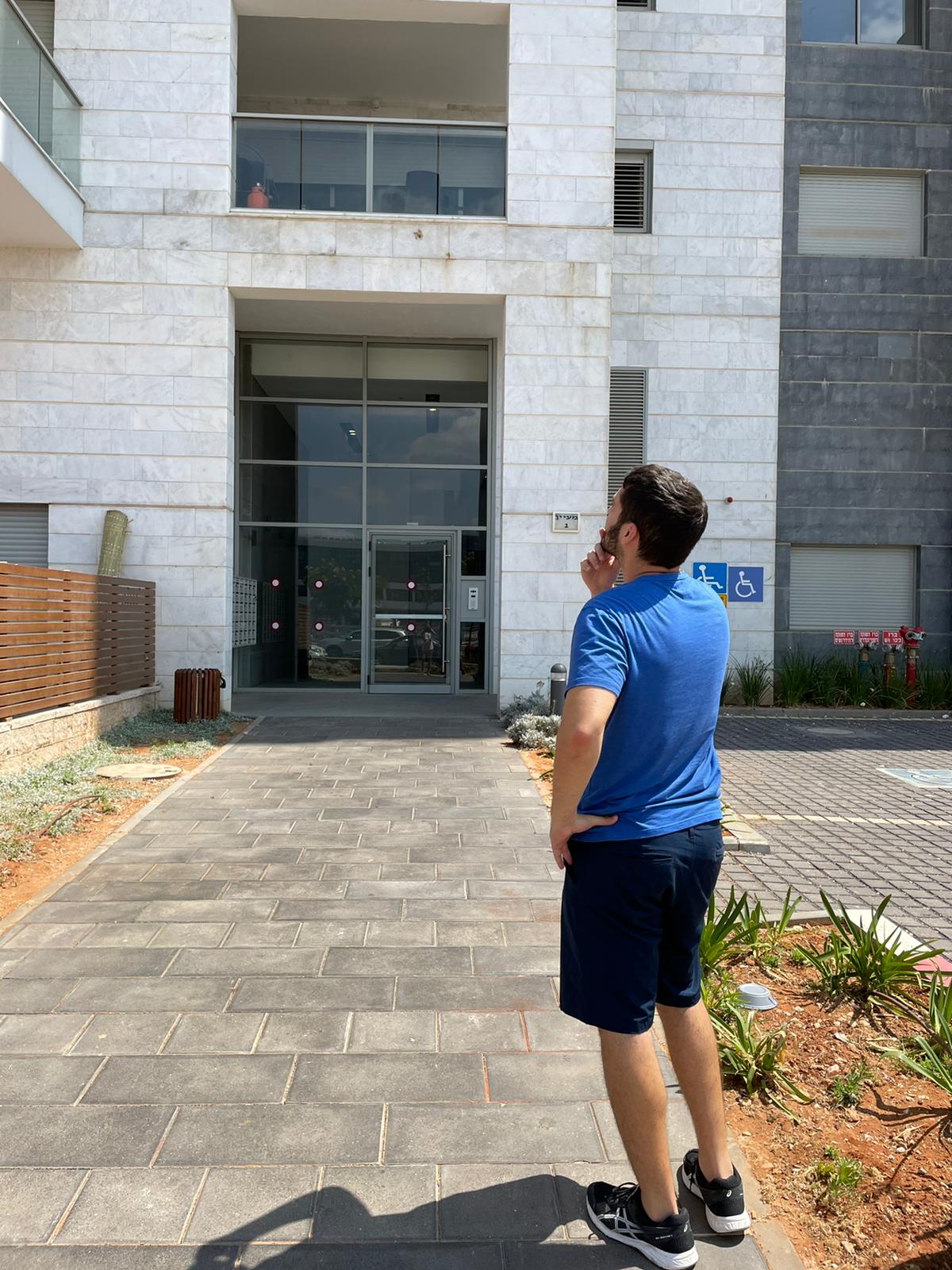 Scott Gross of Tel Aviv looking at housing for his parents from Baltimore. Credit: Courtesy.

So why is Jerusalem so popular? Yaakov Berger, aliyah coordinator for the municipality, says the city offers “a strong welcoming English-speaking community that’s a soft landing and Anglo communities with a variety of social and religious flavors.”

Help over the hurdles

Americans, however, weaned on multiple listings and full-service Realtors may find themselves overwhelmed by the somewhat different Israeli system, especially if they’re trying to do business in a language not their own.

That’s why Rafi Shulman and his sister, Lara Itzhaki, added real estate support to the services they deliver through Olim Advisors. “We’d heard the frustration of negotiating and the confusion around the legalities here,” says Shulman, who connects would-be buyers to a network of real estate and mortgage professionals, as well as guides them through the process and protects their interests.

“It’s not just a different language, but also a different way of doing business,” he says, including the art of buying on paper, a practice not as common in the United States. And who pays the bill? Olim Advisors gets a percentage of the Realtor’s fee for any sale that works out.

Interestingly, the number of people buying as investments has doubled from 9 percent in 2019 to 20 percent after the pandemic hit, reports Shulman. And, he says, it’s no coincidence that the cost of real estate in the US has also shot up. “Many of them see Israel as their real home and hope to move here three to five years down the road, so they’re cashing out of their property there and investing the money here.”

This is injecting less sought-after areas with a boost in both demand and price, he adds. “Those who want to be near the water and are outpriced in Netanya and Tel Aviv are looking at other beach towns like Ashkelon, Bat Yam, Nahariya and Hadera.”

Additional factors pushing the prices up are an increase in the cost of building materials and a shortage of housing—“the builders can’t build fast enough,” says Shulman. “And it can take years from development to completion, made worse by corona grinding the government approval process to a near halt.”

So, given all these factors, are increased demand and cost simply blips on the screen of history destined to bottom out soon, or is now actually a smart time to buy?

“Get yourself educated about the market and buy even a small apartment in Hadera or Bat Yam to rent out now and sell later, when you want to trade up to something bigger,” Shulman advises. “You’ll avoid the could-haves, should-haves, would-haves since while you’re waiting for the dollar to rebound, it’s likely prices are just going to climb higher.”

“Of course, it’s a good time; there’s never been a bad time to buy in Israel,” says Bash. “It’s not just a financial investment but an emotional and spiritual one, too. Everyone wants a little piece of Eretz Yisrael.”

Rabbi Aaron agrees the time is right. “This rapidly changing world is telling us to come home and be part of the promised land—not from a distance but from inside the heart of our people,” he says. “There’s a growing feeling among Jews, a growing need to be here.”

“Life is precious, fragile and short,” says Begoun. “After a while, it seemed almost arrogant for us to say, ‘We’ll wait for a more convenient time.’ ”

Want to learn more about buying real estate in Israel? Check out these helpful resources: