Home Jewish World Jewish History Pilot Giora Epstein, 1973: ‘Then I was told, the Egyptian and Syrian... 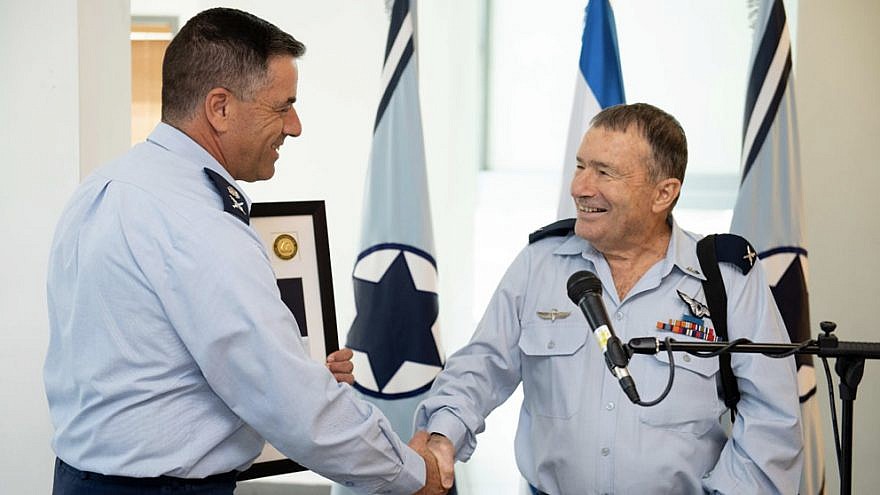 Brig.-Gen. (ret.) Giora Epstein has played a critical role in defending Israel during many air battles throughout his years as a combat pilot. He has shot down no fewer than 17 enemy aircraft—the most amount of fighter jets (plus a helicopter) destroyed in air combat by a single pilot, anywhere, since World War II.

Yet as far as Epstein is concerned, he was merely doing his job. He took part in many life-or-death dog fights with enemy aircraft in Middle Eastern skies, displaying remarkable skill and cool-headedness. But when asked, the former pilot told JNS that it was simply the results of his training and of sticking to his mission.

“We were not thinking about grand ideas, like defending the country during battles. The feeling during a battle of a fighter pilot is about how to conduct this battle in the best way. You’re not thinking about spiritual stories or anything else. You’re focused on what you’re doing, on how to manage to take care of yourself in the best way and hit the enemy as much as possible. Those are the two things. Beyond that, there are no thoughts. It’s about doing all of the things you trained for and knowing how to do them in the best way you know how.”

When the Yom Kippur War erupted in October of 1973, Epstein was an officer serving at the Israeli Air Force’s headquarters in Tel Aviv, in the Operations Department.

On Friday, the day before the war began on Oct. 6, he traveled south to Refidim air base in Israeli-controlled Sinai to be part of an emergency stand-by team for his 101 Squadron of Mirage jets.

While at Refidim, Epstein began receiving phone calls from the IAF’s headquarters in Tel Aviv, as it became clear that war was drawing closer. Headquarters ordered Epstein to return, viewing his work in the IAF’s Photography Branch, where he planned intelligence-gathering flights, as being of crucial importance.

Epstein returned to Tel Aviv, and the next day, began issuing orders for aerial photography flights over the Suez Canal. “Then, at around five [minutes] to 3 in the afternoon, an intelligence person tells me that the whole of the Egyptian and Syrian air forces are in the air, and that they are on the way to Israel,” he recalled.

“I immediately called the bureau of the IAF commander. He was in a commanders’ meeting. They headed underground [to the IAF’s command room] immediately and took control. I was appointed to coordinate air-to-ground attacks, even though it wasn’t my job. But at the time, nobody else was responsible for that.” 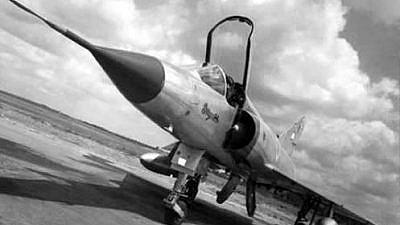 Epstein was sent to the underground control room of the Artillery Corps, where he spent two days overseeing air strikes on advancing enemy forces. He then headed back to the Photography Branch, spending days in war planning and operations.

On a few occasions, he also took to the air, joining his squadron for air patrols and a night flight. But after 10 days of raging conflict, Epstein had decided that the time had come to fully join the air battles that were raging between the Israeli and Egyptian air forces.

“I went to my commanders and said I had to go to my squadron because I feel that I am not taking part in war,” he recalled. By that time, the IAF’s headquarters had filled up with enough people to operate at full capacity, and Epstein was given the green light to join his squadron.

On Oct. 18, Epstein was in the air, patrolling the Suez Canal and about to get his first taste of action. “We called this patrol ‘turning off the sun’ because it was the last patrol of the day. We would fly until the last light of day and then land, allowing Phantom planes to continue the patrols because they had radar. We in the Mirage jets did not have radars,” he explained. “When it got really dark, the air controller told us to land at Refidim.”

But suddenly, the controller came back on the radio, telling them to abort the landing and head straight back to the Canal, where an Egyptian air assault was underway. On the ground, IDF ground forces were preparing to cross the Suez Canal into Egypt, and the Egyptian planes had come to bomb them.

Epstein flew into the area and spotted a napalm bomb explode on the ground.

“Against the background of the blast, I saw the silhouette of an Egyptian Mi-8 helicopter, with its back door open and the crew rolling off napalm barrels onto our forces,” he said. “I did the tightest turn I could, placed the helicopter in front of my gun sights and released a burst [of cannon fire]. The helicopter entered the burst and exploded.”

Epstein had just completed his first shoot-down of the war.

‘Filling holes’ and the ‘wall of fire’

From that moment on, Epstein was assigned to “filling holes” sorties. That meant that his mission was to fill in for planes that were on patrol, and then became engaged in air battles, before using up their fuel and having to land.

On Oct. 19, Epstein and a second pilot were scrambled to the Suez Canal, after being told that an Egyptian attack was forming and a hole had formed in the Israeli patrol. “We sped to the Canal and when I got there, I saw to the west a convoy of four pairs of Sukhoi -7 Egyptian planes, which were arriving to attack. We turned hard and went after them,” he said.

“I did not manage to catch the first pair, but I caught the second pair. As they dove towards our [ground] forces on the canal, I fired a missile at the back plane and struck it. It continued to dive straight into the canal, crashing into it. Then I turned and flew after the second plane that was fleeing west to Egypt. It released munitions west of Canal and escaped. I pursued it.”

Epstein began a speedy, low-altitude pursuit, but he knew he was approaching a known trouble spot. “We called this area ‘the wall of fire.’ Because every Egyptian there with whatever weapon they had would raise their weapons and fire in the air, so it was very dangerous to cross that line. I said to myself, ‘I’ll pursue up to that line. If can reach him, OK, if not, then no.’ ”

As they approached the “fire wall,” Epstein fired a small burst from his cannon that exploded in front of the Egyptian plane. “This startled him, and he turned. As soon as he turned, I had a target, fired a burst, struck the plane, and he crashed into the ground. I returned to land at Refidim,” he said.

Hours later, Epstein scrambled to join a formation of Israeli Phantoms that was patrolling the Suez Canal. They spotted a convoy of Egyptian planes, attacking from the west, and Epstein once again engaged. He struck one enemy plane with a missile—causing it to blow up in mid-air—and the Egyptian pilot had ejected just before being hit.

“He descended over the area throughout the whole battle, waving his arms and legs. Of course, none of us fired at him,” said Epstein. He continued onwards, destroying another aircraft with a machine-gun burst. 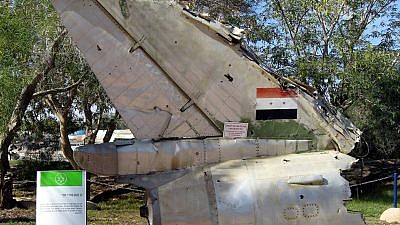 Tail of former Syrian Air Force Sukhoi-7 at the Israeli Air Force Museum in Hatzerim, a kibbutz in the Negev Desert near Beersheva. Aircraft was shot down on Oct. 6, 1973, while striking an Israeli base at Um-Hashiba, by 20mm cannon of 881 anti-aircraft regiment. Despite the two-star flag, the aircraft is not Syrian. The plaque to the left of the plane says it’s Egyptian. Credit: Oren Rozen/Wikimedia Commons.

A dog fight with Egyptian aircraft

Oct. 20 saw Epstein back in the air, once again “filling holes.”

He was in a four-plane formation flying in the direction of attacking Egyptian aircraft. “We took off, flying towards the Canal. We had not yet been assigned a target,” he said. “When we reached the Canal, the controller told us to fly at 20,000 feet and search for adversaries. I reported seeing nothing. The controller told me to look south, and sure enough, I saw a pair of Mig-21s coming from south to north, at our attitude. When they reached us, they turned west towards Egypt. We pursued and closed in on them, fast. I fired a missile at the back plane, struck it, and it exploded. Then I went after the partner plane, which was maneuvering to avoid being shot down.”

But the incident was actually a trap, laid by the Egyptians to pull the Israeli jets into an ambush in the skies. “We saw from below 20 Mig-21s that were trying to pull us down,” he said. “The pair [we pursued] was bait.”

Unfortunately for the Egyptian pilots, the Mig-21s flew at them from a low altitude at low speed, meaning that when they reached the Israelis’ altitude, they “did not have a big advantage,” stated Epstein. A major air battle had, however, begun.

Every plane in the Israeli formation began fighting, firing missiles and machine-gun bursts at the Egyptian aircraft. “My No. 2 fired a missile and shot down the Egyptian plane. Then he experienced a problem, and I explained to him how to get out of it and go to land. Our third plane was running low on fuel. It brought down an Egyptian plane and went to land. Our No. 4 pursued plane and brought it down, but moved away from main battle,” Epstein said, recalling the minute-by-minute fateful moments.

“At this stage, I’m pursuing a plane, and he is maneuvering like crazy to avoid getting shot down. He reached a low altitude and lost speed. When he finished his maneuver, I struck him with a burst, and the plane exploded,” he said.

That’s when Epstein saw that he was alone against no fewer than 10 Egyptian Mig-21 aircraft. “I started fighting them. It was quite a defensive battle, but I took advantage of situations,” he stated.

He destroyed one enemy aircraft with cannon burst and fired a missile at a second one, but missed.

After those dog fights, “there remained one pair that was after me. I threw them forward. They pulled up and lowered their nose to escape westwards. I descended, and when they were upside down, I came up from below and released a burst. One hit the cockpit, and he continued his maneuver straight into the ground. Nothing exploded. Apparently, I had hit the pilot. The second plane fled, and I ran out of fuel so went to land at Refidim,” said Epstein.

Within 40 hours, he had destroyed a total of nine enemy aircraft.

‘Where is the battle?’

On Oct. 23, Epstein was flying in a four-plane formation. The planes replaced another patrol that was running low on fuel. As the planes that completed their patrol moved towards their base to land, the controller suddenly shouted out, “negative on going home,” and directed them to fly towards an area where enemy activity had been detected.

Epstein had flown into the largest battle of the Yom Kippur War. Ten Israeli Mirage jets were up against 20 Egyptian Mig-21s. Once again, the Egyptians had prepared an ambush.

“They were very frustrated that we shot them down all of the time,” said Epstein.

During that battle, Epstein shot down three aircraft out of that sky. In total, the Israelis destroyed 11 Egyptian planes in the battle.

On his way back to landing, Epstein’s base commander called in. “He received the details of the battle, congratulated us, and then informed us that the war had ended,” recounted Epstein. “My feeling to this day hasn’t changed. We did our job in the best way we could.”