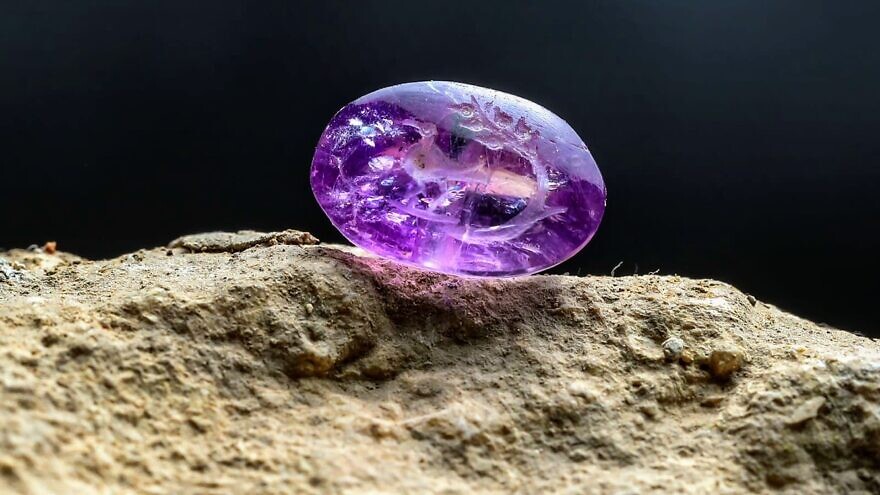 The Israel Antiquities Authority announced on Thursday the discovery in eastern Jerusalem of an ancient amethyst seal bearing the first known depiction of the plant known as “Balm of Gilead.”

The engraving on the 2,000-year-old seal apparently portrays the biblical persimmon plant—not related to the familiar fruit of the same name—used during the Second Temple period as one of the more expensive ingredients for producing incense, perfume, medicines and ointments, according to the IAA.

The plant went by many names, including biblical persimmon, bosem or balsam, and Balm of Gilead.

The seal was found during excavations in the Emek Tzurim National Park along the foundation stones of the Western Wall in Jerusalem’s Old City.

“This is an important find, because it may be the first time that a seal has been discovered in the entire world with an engraving of the precious and famous plant, which until now we could only read about in historical descriptions,” said archaeologist Eli Shukron, who conducted the excavation on behalf of the IAA and the City of David.

Shukron, along with researchers Shua Amorai-Stark and Malka Hershkovitz, characterize the engravings on the seal as a bird, probably a dove, and a branch bearing five pieces of fruit. After examining the engravings, they said they believe that the latter is the persimmon perfume plant mentioned in the Bible, Talmud and various historical sources.

“Towards the end of the Second Temple period, the use of stone stamps expanded and became more common, but most of the stamps discovered so far with plant engravings were of … vines, dates and olives,” said Amorai-Stark, pointing out that the fruit engraved on the amethyst stone “is unlike any we have encountered to date.”

“The balsam plant is a positive symbol,” explained Shukron, “because magical and ceremonial properties were attributed to it.”

The dove, said Amorai-Stark, “is also a positive motif in the Hellenistic, Roman and Jewish world, symbolizing wealth, happiness, goodness and success.”

Noting that the engraving on the seal attests to the identity of the person who wore the ring, she said that “if it is indeed the famous and expensive biblical persimmon, then it is likely that the seal owner was a Jew with means since the production and trade that took place around the persimmon plant was tightly controlled at the time by Jews living in the Dead Sea basin, where the fruit was grown.”

Shukron concluded that finds like this one “allow us to get a glimpse into the daily lives of the people who lived in the days of the Second Temple—the glory days of Jerusalem.”