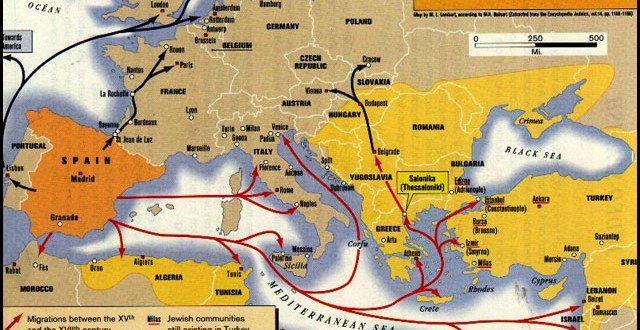 Spain and Portugal had large Jewish populations until various pogroms and forced conversions, culminating in the 1492 and 1497 edicts forced all Jews to either leave the Iberian peninsula, become Catholic, or be executed.  Those horrible edicts had a major impact on world Judaism, as the Iberian peninsula was an important center of Judaism.  The Iberian peninsula was called Sepharad, one of the places Jews were exiled to by the Romans. Therefore Spanish and Portuguese Jews are called Sephardim.  Many Sephardim settled in North Africa, the Middle East, the Balkans, or Western Europe. Many of these communities still have people who speak Ladino.  These communities preserved Judaism directly after centuries of exile.  In recent decades, there has been considerable research on conversos of Sephardic heritage.  A number of documents have been uncovered on the Spanish Inquisition in the Americas and in Europe.  Considerable analysis has been done on these documents and a lot is currently being written on them.

Various terms are used to describe people who are descended from Sephardic Jews whose families no longer maintained Judaism due to persecution.  Conversos, Crypto-Jews, Marranos, Anus, among others all describe this very large population. North and South America have an estimated 100 million conversos.  Genetic testing has also confirmed that 20 percent of the people in Spain and Portugal have Jewish genetic markers.  A major center of research on Conversos in the Americas is in New Mexico, particularly at the University of New Mexico.  Stanley Hordes in particular has challenged the notion of what it means to be Jewish.  Traditionally according to halacha one’s mother has to be Jewish in order for a child to be Jewish (baring conversions which may also happen), and there have been Jews who favored this unbroken continuity.  However the additional detailed light of forced conversions and of Jews forced to hide or not pass down Judaism out of fear have challenged this notion.

A number of organizations in Israel have formed to assist communities of Crypto-Jews around the world in learning of their heritage and for those who wish to, to return to the fold.  Families that preserved faint traces of Judaism now have members learning Hebrew and attending synagogues. These organizations are also addressing the bias from those that adopt a strict Halachal interpretation of what it means to be Jewish, and who seemingly do not recognize that substantial suffering was caused when large numbers of people were forced to either hide their faith or convert and the emotional damage it did to their descendants as they were denied a part of their heritage.

Knowledge of the conversos has influenced the Sephardic right to return to both Portugal and Spain.  In 2015, both Portugal and Spain passed laws giving the descendants of expelled Jews the right to return to Spain and Portugal.  While Portugal’s requirements are more strict (one has to get documentation from an Orthodox rabbi), Spain merely requires proof of Sephardic descent(along with proof of connection to modern Spain, passing a Spanish cultural and history test and a Spanish language test).  Both countries require birth certificates and criminal background checks, which have to be apostilled and translated into Spanish or Portuguese.  Spain and Portugal have made apologies for this historical wrong, and this offer of citizenship to the descendants of expelled Sephardim seeks to right a historical wrong.  And it does recognize the heritage of those forced to convert to other religions as one does not have to be a practicing Jew to receive either the Spanish or the Portuguese nationalities.

Recognition of conversos from the Spanish and Portuguese expulsions has now taken place at the governmental and academic levels in Spain and Portugal, throughout the Americas, and in Israel itself.  Greater recognition needs to come from religious and political establishments, and we must keep in mind other populations of Jews in Europe, the Middle East, Ethiopia, and other parts of Africa were also forced to convert and/or hide their Judaism.  More outreach needs to happen to these populations, as well as greater research and recognition.