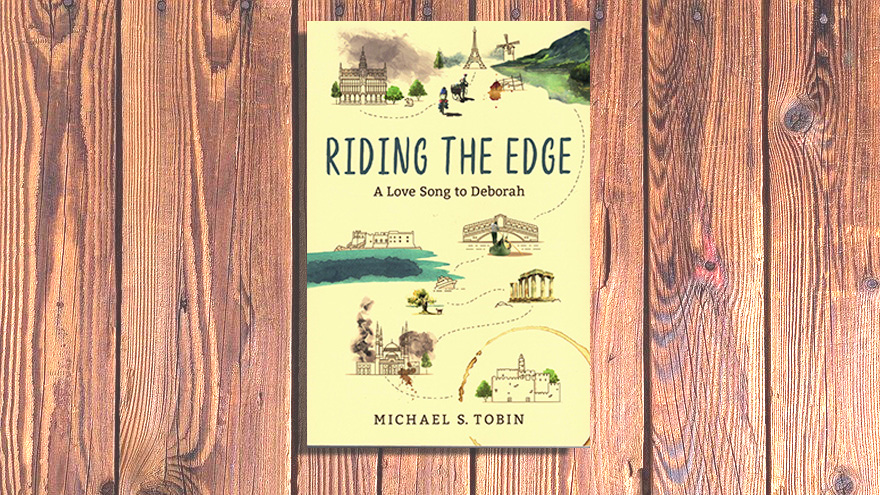 In the context of the Middle East, to which they traveled by way of a tortuous, yet exhilarating bike safari through Europe, the Jewish Michael Tobin and his Lebanese-Christian girlfriend Deborah were problematic candidates for a lasting romance.  Religion, nationalism, and past romantic attachments seemed to militate against their permanence as a couple  However, these two American psychologists were open to new experiences and to each other, and their time on the road meeting people for intensive discussions about life, love, and loss, impacted each of them differently and profoundly.

They traveled both in Lebanon, where Deborah met distant relatives and Michael posed as a Protestant, and to Israel, where Michael realized that Judaism was a missing yet essential part of his identity and where Deborah, who grew up among Jewish friends, found herself enchanted.  The year was 1980

En route, in Europe, they were assailed by the memories of World War II and the Holocaust expressed to them by people they met serendipitously.  At a campground in Belgium, they met a man who referred to himself as Le Clown.  During the war, he had trained himself to be Le Saboteur, blowing up Nazi German installations and killing as many Nazis as he could with nary an afterthought.   But once the war ended, he was haunted by the contorted faces of dead Germans and he thought he must bring laughter back to the world.  Dressing as a clown, he became a pied piper to the children at a nearby orphanage, his hardened wartime identity not erased but somehow softened by his post-war avocation.

In Paris, where they encountered Simone and Alain, Simone described the nightmares she had experienced in her post-war childhood.  Her two brothers had been killed during the war, incinerated by  a British bomb that dropped on her parents’ home at night.  Their father could not get to the boys in time; when the flames subsided all that was left of them was ashes, which he scooped up and preserved in a jar that he kept in his office.

Suffering from a urinary tract infection, Deborah needed to stop in the French town of Ouroux-sur-Saône, where Claude, a medical doctor, not only treated the malady but invited them to spend a few days with him and his wife Nicole.  Discussing their lives, Nicole disclosed that her father had been part of the Resistance and was traumatized by the loss of his best friend and family, all gassed to death in Auschwitz.

At a campground in Monrevel-en-Bresse, they meet Louisa, a Filipina, and Julian, a Dutch Christian, whose father was sent to Auschwitz for organizing worker strikes to protest the persecution of the Jews..  The only reason the father survived, in Julian’s opinion, was that he had the blond hair, blue eyes looks of a northern European.   Post war his father had a form of survivor’s guilt.   “God deprived him of penance and martyrdom– the chance to sacrifice his life like Jesus as an atonement for the sins of the Antichrist.”

In Greece, they met Solomon, who told of the destruction of the Jewish community of Salonika, where his father had grown up before moving to Athens.  The father had fought with the Greek partisans, and returned to Salonika after the war.  He learned that every member of his family had been murdered in the Auschwitz, Majdanek, and Sobibor death camps.

The interaction with Solomon, a proud Jew, prompted Michael to question his own attitude toward his religion.  Why, he asked himself, had he been running away from his heritage?  Why had he been rejecting part of himself?  In Israel, he figured, he would find answers; but first, he and Deborah needed to visit Lebanon, where unbridled violence between Christians and Muslims and Palestinians and native-born Lebanese filled the days and nights with terror.  The only thing all these groups could seem to agree upon was that they hated the Israelis, and by extension Jews elsewhere in the world.

Deborah’s third and fourth order cousins were welcoming, even tearful, that a distant American relative should visit them in the midst of a war zone, to reestablish family connections and to explore her own identity.  Their fatalism and bitter depression over their current life-or-death situations was palpable, but still they welcomed their visitors with traditional feasting.

By comparison, Israel was a far less turbulent experience.  While not in any noticeable danger to their persons, it was in Israel that Michael and Deborah had to face ultimate questions.  Who, indeed, were they?  What was their relationship to each other?  If they were to be a couple, how much must each of them change?

Clearly amid the anguished wartime memories and the present-day angst that they encountered, Michael’s and Deborah’s bicycle trip was not the type of moon-lit adventure that one might anticipate would lead inevitably to romantic union.  However, in the exposure to such adversity, these two psychologists had the opportunity to ask themselves the hard questions of self-definition.  I think readers will find this memoir to be both a pleasing travelogue and a stimulating sortie into the subconscious realm of identity formation.